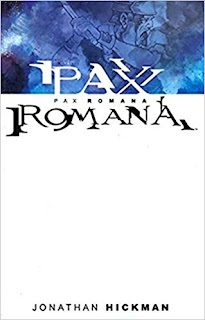 Time travel has long been used as a vehicle for creating alternate history.  Mark Twain did this in his classic novel A Connecticut Yankee in King Arthur's Court.  L. Sprague de Camp also did this in Least Darkness Fall, the novel that inspired Harry Turtledove to study Byzantine History.  I bring this up because it relates to the comic that we're going to be taking a look at today.  We're taking a look at Pax Romana by Jonathan Hickman.

Pax Romana starts off in with a framing story in the megacity of Constantinople.  The Gene Pope, the bioengineered leader of the Catholic Church comprise of the genetic material of 1026 holy men and women, is telling the young emperor of the Holy Roman Empire the story of how the empire came to be.  Ah, but this isn't the Holy Roman Empire you're probably thinking of.  It is a Roman Empire that never fell, and where church and state are attached at the hip.

It all start in the year 2050 of an alternate timeline.  Most of Europe had gone secular, and Islam was on the rise due to mass immigration.  The Church was losing support by the day, and might be on its last legs before long.  In a last-ditch effort to fix this, the Church sent a paramilitary force of 5000 individuals back in time to the year 312 AD.  The goal was to set up a stronger foundation for the Church and prevent the mistakes of the past from ever happening.

The forces were led by Nicholas Chase, the Pope's own nephew.  Well, technically, Caridnal Beppi Pelle was meant to be the leader, but Chase killed him shortly after the team arrived in the past.  Chase and his team decided to implement their own plan, while trying to stay true to the spirit of the original.  They were tasked with creating a better future, but can utopia ever be created by mere mortals?

I think I'll start by talking about the art.  I can best describe it as stylized minimalism.  You don't really get any true backgrounds, just some splashes of color and maybe a couple bit of furniture.  The characters themselves tend to be drawn mostly white with a few splashes of color.  I have to admit, I was rather skeptical at first, but it kind of won me over in the end.  There were times I did wish to see some more detailed backgrounds, but the minimalist style actually kind of works for this comic.

Let's talk about themes.  The description of society in the 2050 is actually a red herring for the true theme of the comic.  Namely, can a perfect society be run by imperfect beings?  As the old saying goes, the best laid plans of mice and men often go awry.  We see this from the very first issue when Nick assassinates Cardinal Pelle.  Of course, it goes beyond that as Nick's fellow mercenaries begin to develop their own plans and ambitions.  Still, in the end they're still pretty successful.  The technologically advanced future of the framing device, completed with colonies on Mars, is reveled to be the year 1492.

Just as a side note, when I first read this comic, the 2050 scenes seemed laughably unlikely.  These days, however, they seem eerily prophetic.  The socio-political part, not the Vatican developing time travel part.  Side note, why does the pope order all evidence of the time travel plot destroyed?  History is going to be changed so, one assumes, all incriminating evidence will be wiped away.

I thought that the Romans were all well written.  Constantine is more than happy to receive help from the time travelers, but at the same time, he's no medieval moron.  He has his own plans and ambitions.  The Romans might be less technologically advanced than the future humans, but they're no less intelligent than them.  Although, when Constantine declares that the church will incorporate beliefs from many different religions, including heretical strands of Christianity, there is springily little push back.  He basically goes "I'm the Emperor and I say we do it this way, so there!" and beyond a token resistance, everyone is cool with this.  As far as Constantine himself creating such a syncretic religion, I can buy that.  He's often credited as the first Christian emperor of Rome, but he was a major devote of Apollo throughout his life, and his wasn't baptized until he was on his deathbed.

The Catholic Church in this alternate world is very catholic in the small-C sense of the word.  The Gene Pope's official titles include the Black Rabbi, the Last Caliph, the Panchen Lama, the Pratyekabuddha, the Eternal Priest of Amun-Ra, the White Shaman and, of course, the Bishop of Rome and the Vicar of Christ.  It's hinted that this is only a fraction of his full list of titles.

I will say it is a bit odd that Last Caliph is part of the list of title, since there's a good chance that Mohammad was never born in this alternate timeline.  There's brief mention that the positions of Gene Pope and Emperor of Rome have historically been one and the same.  This is likely a nod to how, starting with August, the Emperors of Rome also served as Pontifex Maximus, the chief priest of the Ancient Roman religion.  This position is where the pope gets the title of pontifex from.

Okay, I've been putting it off for long enough.  This is, overall, not a bad comic.  That having been said, it's considerably overhyped, in my opinion.  If you look at a lot of the mainstream reviews, you'll see people gushing about how this is the next big thing, and how it's going to revolutionize the world of fiction.  These people obviously have not read much alternate history, or else they'd know that it's been done before.  Harry Turtledove's Guns of the South has a very similar premise to Pax Romana.  As do SM Stirling's Island in the Sea of Time series, Eric Flint's 1632 series, John Birmingham's Axis of Time series, and you could even go all the way back to the novel's I mentioned at beginning of this review.  That's not even getting into all of the online alternate historians who have tried their hands at such a scenario.

None of this makes Pax Romana a bad comic, but it does go to show that it's premise wasn't quite as groundbreaking as many professional reviewers would have you think.  The big problem I had was just how short the comic was.  We get some very tantalizing glimpses of the history of this alternate Roman Empire that are just begging for elaboration.  This really feels like one part of a much bigger story that never materialized, and overall it just feels incomplete.  As far as I can tell, Hickman never intended for there to be sequels, thus compounding the issue.

Granted, there is a timeline towards the end that chronicles some events in the history of this alternate universe, but it just isn’t the same as being able to see all of that in comic book form.  I know that Syfy has expressed interest in adapting Pax Romana.  If they do, I sure hope they expanded it into a full-series, rather than just a miniseries.  It worked wonders when Amazon did it with The Man in the High Castle.