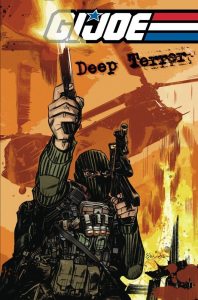 In this book, we see a G.I. Joe team (led by Scarlett) become captured by Cobra and sent to their mines for forced labor. Mainframe, stows away on the mission and it is up to him to try and save the woman he loves and his teammates.

For the most part, the bulk of the story is a bit mundane and seems like it would have made for a decent cartoon episode in the ’80s but it wouldn’t be one of the more memorable ones. The Joes in the mine and some of the other captives attempt an escape, led by Stalker, while Scarlett is dealing with the Cobra leaders at the facility.

This collection encompasses five issues but the main story is concluded by the end of the fourth issue. The fifth and final issue here, serves as a bridge to the next story: G.I. Joe: Target Snake Eyes. In this issue, Scarlett discovers that Snake Eyes is actually still alive and she confronts Helix, who she feels lied to her about Snake Eyes’ fate.

This isn’t a bad chapter in the IDW G.I. Joe franchise. It just serves as filler and as a much needed break from the intensity that was back-to-back-to-back major events: Cobra – The Last Laugh, Cobra Civil War and Cobra Command.

Deep Terror is fairly fun and it gives you time to breathe before the Joe team sets off to hunt down Snake Eyes, who is now in league with Storm Shadow and the Arashikage ninja clan.