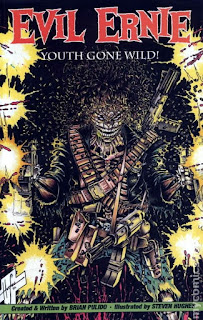 So the story here is of Ernie Fairchild, a psychotic killer who murders for the love of Lady Death. He is in a mental institution and ends up being the guinea pig for a new device called neurotech. His current doctor, Dr Price, who has treated Ernie since he was a child objects to this. He even tries to stop it telling everyone Ernie has a mindlink with Lady Death and this could make it stronger. I'm not sure how Dr Price knows about this or why he believes its true and not just a delusion on Ernie's part. But it turns out Dr Price is correct and the machine blows up which turns Ernie into an undead killer powered by Lady Death's magic. He has to ability to kill and create an army of zombies that obey him and at Lady Death's request he seeks to kill all the living. Ultimately he is stopped by Dr Price. When Price manages to blow Ernie up all of his zombie followers collapse, no longer animated by his power.

This actually wasn't that bad. This reads like a pretty fun interesting horror movie that never got made. It has an interesting premise, Dr Price fills the role of the square jawed Bruce Campbell like hero who saves the day, and it even has a moment at the end in which Ernie can return for a 'sequel'. The art looks a little, I guess amateurish is the best way I can describe it. But it's amateurish in a charming way, kinda like the original TMNT comics. The relationship between Lady Death and Ernie is pretty interesting, it's almost like a low brow version of Thanos and Death in Marvel.

It's main flaw however is Ernie himself. Ernie is too ridiculous to be all that scary and too annoying and stupid to be all that funny. He's like the moron you knew in high school who wore a leather jacket even when it was hot and took Insane Clown Posse WAY too seriously. In a blurb on the back cover Tony Timpone, then Editor-in-Chief of Fangoria magazine, compared Ernie to Freddy Krueger. The difference is Freddy was actually funny. Hell even in the Freddy movies that sucked Robert England was able to bring a certain magic to that character. Ernie's just annoying. I actually thought Lady Death was the real star of this book.
Posted by John "Zanziber" Rogers at 6:00 AM
Email ThisBlogThis!Share to TwitterShare to FacebookShare to Pinterest
Labels: Reviews