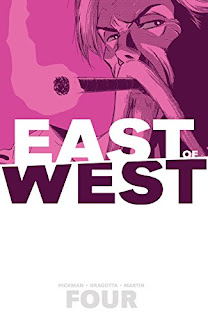 East of West Vol 4: Who Wants War has a slightly shorter story arc, as this volume also contains the East of West: The World one shot, which is a helpful little guide that gives a little bit of back story for each of the seven different factions involved in the main narrative.  It also provides a timeline that spans several pages that gives a brief overview of what happened to lead up to the current conflict.  Once we get past that, the story picks up immediately after the end of Volume 3, with the “Beast” and his mentor on the run following their escape.  They meet another interesting character in their travels, and the Beast is forced to learn some very difficult lessons… It’s getting harder and harder to write these without giving anything away…

Jonathan Hickman takes a different approach in this story arc and chooses to focus the narrative predominantly on one character rather than what is happening in the world at large.  We get a few glimpses here and there of a large scale war going on between two of the factions, but for the most part the focus remains more intimate, which leads me to believe that Hickman is telling us this story is not so much about the big action itself, but more the characters that manipulate and steer the action to where they want it to go.  It still works, but it makes for a slightly slower story, especially when he’s given us three volumes chock full of intrigue and backstabbing leading up to this one.  Ultimately, the story still moves, but it took a little bit of a detour in this volume to add some life to one of its secondary characters, who appears to be working his way into a much larger role.

Nick Dragotta’s artwork is just as solid as it’s always been.  No major complaints in this area.  I will point out that it’s quite interesting to see the Beast’s perception of the world, as shown to him by his mentor, vs. the way the world actually looks.  He does a great job with the juxtaposition of the two perceived “realities” … I guess you could call them that.  One other really bright spot in this issue is the killing fields that the horsemen War, Conquest, and Famine encounter early on on the volume.  The art is conjunction with some of the dialogue in that particular segment is actually kind of chilling to read and see.  It’s like seeing something out of the machine ruled future of the Terminator movies.

All in all, this volume won’t blow your mind, but it does accomplish the task of moving the main story along (just a little), while simultaneously giving us a much deeper look at a character who had kind of been on the sidelines up to this point.  It certainly was not the best of most interesting volume in the series so far, but it’s still a worthy addition to one of the best series currently on sale.
Posted by John "Zanziber" Rogers at 6:00 AM
Email ThisBlogThis!Share to TwitterShare to FacebookShare to Pinterest
Labels: Reviews