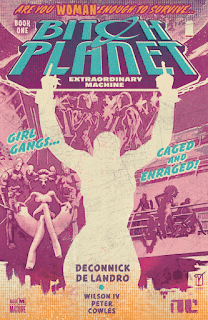 Bitch Planet is a gem of a read, that is not only fascinating but important especially during the time we’re in now where women have become more vocal about their roles and rank than ever. This comic book pays homage to everything women face daily and the problems surrounding this. A lot of issues we see in this comic book relate back to the ideology of gender roles; how women are expected to behave, speak, dress, and conduct themselves for the opposite sex. In Bitch Planet, we get to witness women rebelling against the cultural norm.

Now, I will admit, I’ve only read a few graphic novels in my life, but never a comic book. I’d also like to point out the fact that if it weren’t for my professor who recommended I take a class about this comic book a few months ago, I probably would have never known of its existence. Lucky me!

The story of Bitch Planet is quite simple: it’s about non-compliant women who are sent off to another planet to serve their time. The planet is essentially a prison controlled by old men behind screens and a holographic woman that orders inmates around. However, it’s the way in which these inmates are categorized as non-compliant that makes this story so relevant to the mistreatment and criticisms women face today. In Bitch Planet, we notice one woman being seized for merely appearing upset in response to her husband’s infidelity, and we witness a mother being taken away from her 8-year-old daughter when she’s deemed to be dangerous for unprecedented reasons only to learn that her daughter, too, has been sent away to Bitch Planet for being “too violent” after lashing out when a customer calls her too fat and animal-like. Then, there are women who are punished and sent to Bitch Planet for having to kill men solely for their own protection.

Throughout the story,  every “non-compliant” woman’s background is unveiled. As readers we are able to see  exactly how these women ended up on Bitch Planet in the first place.  As we take a peek through their lives before imprisonment, we then realize that every single one of these women stepped outside their boundaries to rebel against what people (or I shall say the authorities) expect of them and instead, stood up for and embraced their own actions and emotions. This society is not afraid to put women in their place whenever they want to and they have no trouble doing so as authorities lack sympathy and reasoning. Extraditing these women who had natural reactions to their particular situations is a way for the government to validate their political power.

If we take the content we read in Bitch Planet and apply it to our reality, there really isn’t much of a difference, as it is a cultural norm for women to be viewed slightly different than men in a negative perspective. If we flip the situations from Bitch Planet and make men face these same issues, it wouldn’t be a problem at all because that’s just how our culture accepts it (and this really needs to change).

For example, let’s say a husband gets upset after finding out his wife cheated – people will feel sorry for him and negatively look down on his wife. If this actually happened, people would instead help the husband, perceiving him as “the good boyfriend”, and leave the wife in the dust.  If the roles were reversed where the husband cheated on the wife and the wife reacted badly, she would then be viewed as “the crazy girlfriend.”

Although Bitch Planet is an exaggerated and extreme version of what happens to non-compliant women, our life today is really not too far from that life. Therefore, we should consider Kelly Sue DeConnick’s story a warning about where our lives could potentially end up.