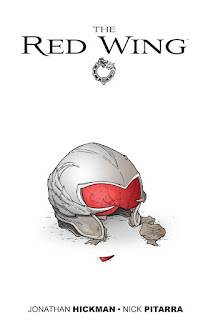 Jonathan Hickman confuses concept for plot and leaves the fantastic concept of The Red Wing floundering and incomplete.  Hickman apparently cannot decide if he is more interested in telling a story about the pilots who navigate both time and space in a war that crosses eons, or if he wants to tell a story about a war that stretches over eons and happens to involve some pilots.  Either way, he fails on both accounts and we are left with a “graphic novel” that is heavy on the graphics and light on the novel.

Dominic Dorne and Valen Redd are new recruits to fly the Red Wing Tac II, a fighter that is designed to destroy the enemy across time and space.  Both Dorne and Redd are legacies; their fathers flew in the original Red Wing squadron and were killed on a mission.  Now it is up to the “sons and daughters of the Red Wing” to continue the fight.

That is a great premise.  But, you will notice that there is a major gap in that description: Who is the enemy and what do they want?  Hickman decides to skip over that minor detail in order to provide the reader with a SHOCK twist at the end of the second issue.  Now, shock surprises work best when there is some explanation why the reader should be shocked.  Just giving the reader something to look at without any explanation doesn’t make fore very good storytelling. Let me give you an example that is similar to The Red Wing, but will not contain any spoilers:

It is Christmas time. Little Timmy and Tina see Santa in their living room.  He turns and sees them and then rips off the fake beard to show his kids that he is, in fact, their father, not Santa.  The kids, both firm believers in Santa, are horrified to find that their belief in the jolly old elf has been shattered.  To make matters worse, the father just stands there without giving any explanation why he would do such a thing.  Did he do it to be mean?  Did he do it because he did not want to lie to his kids?  Did he do it because he had a horrible itch on his chin and had to remove his beard right then?  No explanation.  He just stares at the crying kids, and recites The Night Before Christmas.

Now, that may be surreal as hell, but it is not a good story.  It is a good scene that needs to be explained or at least further expanded upon for it to make sense in a larger context.

Hickman does not do that with his reveal/twist.  Instead he rambles on for another two issues, all the while, another character (and the reader!!!!) begs the antagonist to explain himself.   But, Hickman assumes that this is all self-evident and chooses to jump to another scene which he leaves half-explained a few pages later.

The only thing The Red Wing has going for it is the lovely art.   Nick Pitarra and Rachelle Rosenberg give life to an otherwise stark and linear future.  Their art is reminiscent of Frank Quitely yet they managed to keep the lines clean and sharp when needed.  The color palette shifts from muted colors in the future, to lush colors in the past, making the crazy time-travel elements of the story easy to follow.

In addition, the characters are remarkably easy to identify, despite the fact that several of them have helmets covering half of their face for several pages at a time.  This is a pleasant change from other artists who Hickman has partnered with (including himself) where the art is often murky or difficult to follow.

I really wanted to like The Red Wing.  I was ready to herald Hickman’s triumphant return to creator-owned independent comics.  Instead I am left shaking my head at how such an exciting and rich concept coud be short-changed by a writer unwilling (or unable) to give it the kind of length and development that is needed to take it from concept to plot.
Posted by John "Zanziber" Rogers at 6:00 AM
Email ThisBlogThis!Share to TwitterShare to FacebookShare to Pinterest
Labels: Reviews