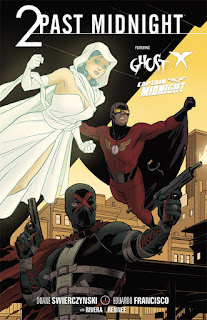 Two Past Midnight meet up in the first crossover of Dark Horse’s superhero comics. A book that’s too good and rare to pass up not reading. Who wouldn’t want to see Ghost, X, and Captain Midnight all together in the same series? All three still ongoing and have their own thrilling tales to connect to. It was nice to see that Duane Swierczynski covered writing this book. Does an excellent job with X and the premise of this story is right up his alley.

twopastmidp1What you like about this right away is the fact that neither of these heroes have met each other. Some of them aren’t even aware of the things others out there are able to do until they meet each other. It creates intense moments of confrontation between them and everything about it is natural when most of them aren’t too used to the concept of team-ups. In fact they’ve never had such a reason to team-up like this. That’s what made it fun to see the brawl which broke loose between them because of a misunderstanding. It’s always a misunderstanding, but you have to give credit to Duane Swierczynski that he doesn’t pull punches to let them actually go for the kill. They aren’t like the golden heroes you see on TV and that is captured throughout this book.

The plot is fairly straightforward as we know a madman is on the loose. His goal is to create shock, awe, panic, and hysteria.The mystery behind the villain is very necessary for keeping everyone on their toes about the possibilities of what could happen next. Seeing things from his perspective as well is very engaging. Having an idea of what makes him tick as he acts creates that dark atmosphere in which you like the sick things he does or you might find it a bit cringe-worthy.

When things really picked up, see how this investigative specter,  psychopathic vigilante, and time-traveling genius operated was interesting. The differences between them really stand out. Meaning that there is an awareness of who these characters are at their core to display how they would act to find this terror-focused sociopath. Those differences makes this intense enough that you are left questioning just how they could possibly get out of this unharmed. Their personalities clash and the trust between them is far from strong enough to hold up against a threat that attacks them mentally. With that said, there was some humor between them which was hard to ignore, especially when it was at the expense of X.

Eduardo Francisco’s style really fit this story. The detail and way he handled drawing everything made it feel gritty. The way it should as when most of Two Past Midnight book takes place in Arcadia, a neutral atmosphere is the last thing you should expect. The light of use of colors also added to this. Could be that a lot of this also took place at night, but it was a good use of it nonetheless.

Two Past Midnight is a great story that has a lot to offer as a first crossover of Dark Horse’s new superhero comics. We know we will see more stories like this to come and of a larger scope. So if it’s anything like Two Past Midnight, it’s definitely worth picking up. For 130 pages you aren’t left feeling like this isn’t worth the money or time. From beginning to end you are left at the edge of your seat with this dark tale.