Doctor Who: The Eleventh Doctor Vol 1 - After Life

Title: Doctor Who: The Eleventh Doctor Vol 1 - After Life 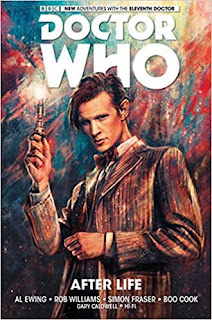 Where Revolutions of Terror with the tenth Doctor followed two main story arcs, After Life follows four. There’s a main arc for the novel, as well as 3 smaller stories that have little nods and connections to the main storyline. The main companion is Alice, though two other companions pop in throughout the story (none from the television series). Alice is someone whose life is going down in a spiral. Deaths in the family, lay-offs, bills; there’s just a lot going on that she can’t handle. In steps the Doctor. She inadvertently helps him solve a case and he offers to let her join him on his travels.

The writers, Al Ewing and Rob Williams, have a lot going on here for the length of the novel. The pacing seems off, except in the final two sections where it slows down and you really get the chance to connect with the characters and the main conflict. Smith’s Doctor is captured really well, as he’s somewhat of the childish iteration of the Doctor; very exuberant and speedy, but thoughtful.

doctor-who-comic-11-page-2-The artists, Simon Fraser and Boo Cook, seem to struggle with how to capture Matt Smith’s face and mannerisms. Some of them are on point, but there are others where the art just looks awkward. They have a much easier time creating their own characters and aliens than dealing with ones that have already been established. Their artwork shines in the creation of the alien “ARC” towards the end of the novel.

The colorists, Gary Caldwell and Hi-Fi, do some great work here as well. With the plethora of different settings and adventures that this novel goes on, they have the opportunity to knock it out of the park on multiple occasions. Jungles, theme parks, high-tech facilities, etc; they all jump off the page with their color. Even the characters, and again, especially “ARC,” look fantastic. The shading particularly is exceptionally well done.

After Life suffers from some pacing issues, but is still a worthy outing for The Doctor. His companions each have their own quirks and strengths, and the novel really shines when all four of them are working together. The novel is a fitting one for the eleventh Doctor. There’s lots of optimism throughout and lots of child-like wonder and joy. As we learn from the Doctor himself, “Aliens are cool.”
Posted by John "Zanziber" Rogers at 6:00 AM
Email ThisBlogThis!Share to TwitterShare to FacebookShare to Pinterest
Labels: Reviews