The Occultist, Volume 2: At Death’s Door 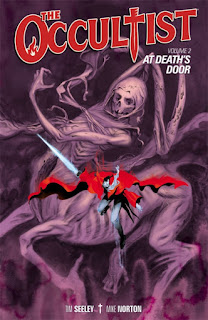 As I’m sure you probably gleaned from the title, this graphic novel is centered around mystical powers. And if that’s all that The Occultist, Volume 2: At Death’s Door had going for it, it would still be a darn fine read. But fortunately for us, there is more going on here than you might first think. This is not your typical supernatural story, not by any means.

Since this was a miniseries originally, it is exceptionally nice that the writers included a couple of pages of back story to help new readers. Most of the time we don’t get that luxury. The premise here is a young man named Rob Bailey has been given the power of an ancient tome entitled The Sword. Following the loss of his trusted friend and mentor, Rob teams up with a local detective to stop the demons and the undead from seizing power and killing innocents. And that leads us to the current chain of events in this five issue series.

Keeping in mind, this is a young man still finding his way through life and trying to unlock the secrets of his powers, so he makes a few mistakes along the way…and some of them are potentially life altering. despite this, our hero is still hard at work protecting humanity and keeping the creatures of the underworld from harming others. From enraged baby spirits to Occultist-eating demons, this poor college student has his hands full. Even his new mentor has a few secrets of his own. But the main event of this comic run is the trio of witches and warlocks that seem to be able to move through the ethereal plane at will. But as with many things, not everyone is who the appear to be.

Mike Richardson and Tim Seeley are together here. They have penned a wonderful story that reaches beyond the average superhero comic and stays interesting and action-packed the whole way through. Mike Norton‘s art is bold and distinct, lending itself to the story rather than trying to outshine it. This comic is the perfect marriage of the visual and the literary.

Much better that volume 1, there is 1 item that makes me look forward to possibly more Occultist: They touch on the other supernatural "superheroes" in the Dark Horse universe. I would love to see an Occultist/Ghost crossover.
Posted by John "Zanziber" Rogers at 6:00 AM
Email ThisBlogThis!Share to TwitterShare to FacebookShare to Pinterest
Labels: Reviews