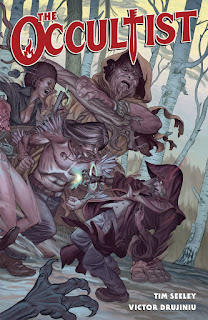 Robert is a momma’s boy in college. Worse, he is a momma’s boy nerd who just got broken up with because all he does is play video games and read books. I sympathize. Luckily, Robert can go get some good advice from Mr. Elder, the owner of the rare book shop Robert works at. Surely Mr. Elder has better advice than Robert’s mother who merely said that the girl was evil and a temptation? But before we learn any valuable lessons, Robert notices a strange book which Mr. Elder tells him not to touch while walking out of the room. Robert is then chosen by the book, The Occultist, to become the Sword. This stellar quote about sums it up, “Man does not choose to wield the sword. The sword chooses to wield the man.” p. 16

Predictably it is right after this scene the benevolent Mr. Elder is murdered while trying to hand off the book to the sketchy dudes sent to pick it up. Subsequently, we learn two things: these sketchy dudes work for Aiden Beck, an evil shaman, and the sketchy dudes are substantiated evil crow spirits. Now all of their talk about shiny things, pecking out eyes and the great cornfield in the sky make sense. Thankfully, we don’t have to listen to them blather on about who gets to peck out Robert’s eyes because “The Occultist” reveals their true form and Robert is able to destroy them. While I quite like the concept of Native American shamanism and evil spirit animals, etc. I didn’t entirely like the way in which mid-battle the book reveals a Wikipedia-like page detailing the origin of the enemies and how to kill them… It was kind of cheesy. However, I feel like this method of explanation is not going to go away and the reader should prepare themselves for the narration to be paused mid-action scene in the future so we can understand the “true nature” of the evil spirits Robert, aka the Sword, is attempting to vanquish.

Immediately following the defeat of those damn, dirty crows, Robert is confronted by the ghost of Mr. Elder, who sets up the classic superhero, “with great power comes great responsibility” clause, except he adds the caveat that it really doesn’t matter how good Robert’s intentions are: he’s doomed to eff everything up… Great, the reader is in for Robert’s ride up shaman sh*t creek. At this point I’m waiting for both Robert’s mother and his ex girlfriend to be murdered by eye pecking crows, while he’s engrossed in his pity party of thinking, “Poor me, why was I chosen as the sword? I didn’t ask for this. *sob*”. This seems an even more likely scenario as Aiden Beck, who is dressed like a hobo who found a suit, summons all of the, “hit mages”, to kill Robert. Again, I like the concept, but the shirtless Native American hit mage bro who has a vagazzled happy trail is really a little much… And the fact that they are called hit mages. Do some research and find the bad ass ancient shaman name for assassin. And for the love of god please do not reveal the origin of Native American bro’s vagazzling and how to “vanquish” it…

The second chapter of “The Occultist” opens with a hooker. Literaly, a prostitute. About time… We didn’t get to see any boom shakalaka during the college scenes because Robert was too much of nerd, but now we get to see the shaman summon spirit animal python? Samuel L. Jackson would be proud. Oh scratch that; the shaman is brutally murdered by the hooker aka the disguised “Sword-breaker”. The reasoning behind this seems to be because Aiden Beck wasn’t a nature shaman anymore, hew was a techno-shaman… I’ll be honest, I was glad to see Beck go. He was really stressing me out by “sacrificing” iPhones in bizarre rituals, and jamming his fingers into USB sockets. Plus what kind of pussy-ass shaman has to hire hit mages? It seems that the “Sword” has a new bad guy to deal with… The “Sword-breaker”!

Luckily Robert seems to have come to terms with his new powers, by casting a love spell on his ex girlfriend, and well… Someone is summoning spirit animal python if you know what I mean. Craziness ensues as the local detective comes to question Robert about the death of Mr. Elder. The hit mages conveniently show up at the same time. Vagazzled Native American Bro (VNAB) hasn’t shown up yet, but there is Pandora, and something seems to be up with her “box”. Yes, there is definitely some sexual innuendo going on here. Anyways, the second chapter ends with Robert facing off against the hit mages, setting us up for the third chapter which is where things get interesting.

Robert finally gets to test out the Sword’s power against the hit mages and it is a pretty epic battle, which is thankfully not interrupted by any freeze frame background info on the hit mages. The Sword dispatches all of them pretty easily, stuffing Pandora back into her box, shaving VNAB and pretty much leaving an all round bloody mess. It looks like Robert is going to come out on top when the “Sword-breaker” shows up, and the one hit Mage who doesn’t seem like a complete mongoloid actually saves Robert.

What follows is a lot of cheesy dialogue, but the writers seem to be cognizant of this, and use the cheesy dialogue as a distraction to help Robert escape, while reemphasizing that he is a nerd extraordinaire. However, I see this self aware irony on the part of the writers as a massive cop out, and this is really where the comic lost me again. They bring up some deep issues, but they do it in an ironic or shallow way, almost as if they only want this comic to be an entertaining read. But if that was the case, they should’ve cut out all of the “deep” dialogue to begin with and kept it a fast paced narrative. An example of this shallowness is when it is revealed why Robert was chosen to be the sword in the first place… He has, “walked the line between life and death” thanks to his crazy Christian-scientist of a mother who refused to take him to a hospital when he was a kid suffering from Meningitis. What. The. F**k. You can’t just casually throw that out as an explanation for the crux of the plot line and then not bring it up again at all in the following 3 chapters!

I’m not even going to bother summarizing the last three chapters of the trade paperback of the Occultist. All I’m going to say are two words: vampire prom.. Yes, the book ends with Robert crashing a vampire prom. In my mind this is one of the numerous examples of the authors skirting around issues of substance, and unnecessarily adding “marketable” vampires and demons for Buffy-esque slaying. There are some plot twists that occur in the last chapters, but again they seem cliche. Do we really care what happens to Robert as he goes to college and is tutored on how to use his new powers by the secretly resurrected Aiden Beck? Aiden Beck’s reappearance also serves as a way for the authors to silence the friendly ghost of Mr. Elder who has been getting dangerously close to some deep issues in his dialogue… Thank god we don’t have to listen to that geezer drone on about values, and what it is like to mature in a world where you have very little control. Kill more vampires, please! Oh and yes I would love mid battle to know the origin of the demons he is trying to exorcise back to hell! I missed the freeze frame Wikipedia articles!

In summary I would say that the Occultist had potential, but the authors tried to draw in too many disparate plot elements and decided to focus on what seems to be marketable action scenes versus saying anything of value. Maybe I’m being too harsh in my judgement, and the authors have really just been foreshadowing the deep issues that will be explored later in the series. But the vampire prom made me not really care if that’s the case. And while the sword has kick ass powers, they seem too hodgepodge. It is like the authors were trying to decide what type of monsters fans would like, as opposed to what would really work well for the plot. They should’ve stuck to spirit animals and shamanism instead of running the whole gamut of mythological beasts from Druids, Pandora, Indiana Jones to demons and vampires. Oh yeah and let’s not forget Native American Vagazzled Bro.