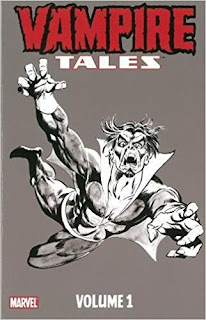 Vampires prowl the dark and the innocents are not the only victims.  In the dark, killers like Morbius and Satana the Devil’s Daughter push the boundaries of what is a hero…The nights are not safe!

Vampire Tales Volume 1 collects the Marvel magazine Vampire Tales which was part of the horror wave in the 1970s.  Like many of Marvel’s magazines the comic burned out quickly but had an interesting run.  The series is collected in three volumes, but uncollected in an all reprint Vampire Tales Annual #1 that contained the stories “The Praying Mantis Principal” (Vampire Tales #2) and “The Kiss of Death” (Vampire Tales #3) among other stories.

I’m a sucker for anthology series.  Vampire Tales is no exception.  I actually prefer the shorter more EC style of stories in the volume than the longer comic based volumes surrounding Morbius and Satana.  The short volumes are like little Twilight Zone episodes…almost all with predictable zingers, but they are still fun.  It is also good to see that Marvel kept in the articles (though dated) that talk of vampires and vampire films.

The Marvel magazines tried to be more edgy and darker than Marvel’s regular series.  This means for the most part, prostitutes, pimps, drug users, and other “dark” figures of the world instead of the lighter world of comics (the magazines weren’t regulated by the Comic Code).  They also as a result boast some great art and cover art.  The magazines were black-and-white but here, they also reprint the great colored covers.

The series does introduce Satana in Vampire Tales #2.  It is a short story simply called “Satana” and Satana is presented as more of a succubus than a vampire (Vampire Tales often strayed from the vampire theme).  Satana was created as a type of ying-yang to her brother the Son of Satan (Daimon Hellstrom).  While the Son of Satan rejected their father’s darkness, Satana embraced it…though she never really got to shine or develop since her limited appears were few and far between.

Vampire Tales Volume 1 wasn’t a big sell and can often be found at discount prices.  That is a shame since it probably hinders other Marvel magazines from receiving this nice treatment.  Tales of the Zombie was already collected in an Essential volume and Dracula Lives and The Hulk also found its way to other collections, but it would be great to see Deadly Hands of Kung Fu or Monsters Unleashed get full printing.
Posted by John "Zanziber" Rogers at 6:00 AM
Email ThisBlogThis!Share to TwitterShare to FacebookShare to Pinterest
Labels: Reviews