A Game of Thrones Vol 1

Title: A Game of Thrones Vol 1 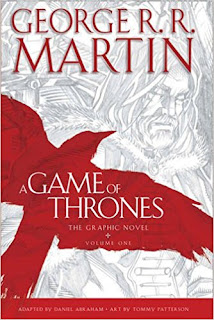 Adapted by Daniel Abraham and lushly illustrated by Tommy Patterson, the graphic novel opens with an ill-fated ranging beyond The Wall of handful of the Night’s Watch and ends with Daenerys discovering bit by bit her own power and personal strength thanks to her new position within the Dothraki Khalasar. Volume One compiles the first six issues (out of what will be a total of 24 at 29 pages a pop) which cover the trials and tribulations of the Stark family of Winterfell, King Robert Baratheon and his manipulative Lannister kin, and the cruel fallen lord of House Targaryen and his enslaved sister who may not be as innocent as she looks. Where the books were split into sections — In the Seven Kingdoms, On the Wall, In the East — and each chapter devoted to a single character, Abraham and Patterson jump from different perspectives by color-coding the text blocks (Tyrion gets red, Arya goldenrod, Bran grass green, etc.). Comics are all about show don’t tell, and they’ve done a good job of it.

Abraham has worked with Martin before, both directly in adaptations of Fevre Dream and “Skin Trade” and indirectly with Martin’s ongoing Wild Cards series, and it shows. While it’s obvious that a lot of the first book was left out of the comic (a 720 page book becomes a 7200 page graphic novel if you illustrate every damn thing), what remains is beautifully written. Obviously the writing credits go to Martin, but by not butchering the text with a cut and paste job, Abraham has abridged the novel in a way that isn’t clunky or confusing. It’s easy to edit something down and cut out a seemingly quiet scene that holds the key to the rest of the story’s secrets, but by the end of it I could still follow the story and start guessing at future plot lines. Not even the characters lost personality; what was left unwritten about them came out in the illustrations.

Patterson has no Martin-related experience, but he’s worked extensively with studios as an illustrator, and that gives this comic much more of a cinematic quality. He isn’t playing with the medium here. There are no awesome comics moments. He really is an illustrator rather than a comics artist. Really, that was the only disappointing aspect of the book. I wanted to read a comics version of A Game of Thrones, not an illustrated novel. But disappointing doesn’t mean bad, just not what I was expecting. Patterson suffers a bit from the dreaded Liefeld syndrome, sometimes giving his men muscles waaay oversized for their bodies and women teensy tiny waists (see Khal Drogo and Daenerys as the worst offenders).

In the intro to the graphic novel Martin talks about how he used to read comics during the Comics Code’s heyday, and how there was a huge debate over whether or not Classics Illustrated were “a good thing, seeing as how they helped to introduce kids to ‘real literature.’ Others insisted…that these adaptations did violence to the great books they were based on, cheapened them, robbed the reader of the delights of the original…They were right, of course. But they were wrong as well.” That’s pretty much how I feel about reading the graphic novel of A Game of Thrones before reading the book or watching the show. In a way, I kind of feel like I cheated, like I’m reading the CliffsNotes version before struggling through the “real” thing. On the other side of the coin I feel like I’m reading something that stands apart from the book and show, something that exists in its own right and has its own artistic validity and worth. And trust me, this graphic novel is full of both of those things.
Posted by John "Zanziber" Rogers at 6:00 AM
Email ThisBlogThis!Share to TwitterShare to FacebookShare to Pinterest
Labels: Reviews