Ultimate Comics Spider-Man Vol. 1: The World According to Peter Parker 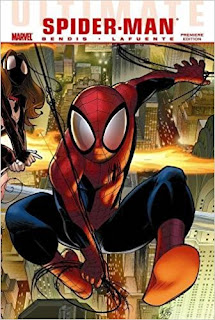 Marvel Comics, the long standing and beloved purveyor of superheroes and wonderment for countless generations founded the Ultimate line — an attempt to free characters like the Hulk, Deadpool, and others, from decades of continuity but more importantly to redirect them to a whole new, modern, and fresh start for the readers to experience. The Ultimate Comics line prospered but by very definition of prospering over time became not ‘new’ anymore.

And so, it was decided that the line would be relaunched. For Spider-Man comics, it went from being Ultimate Spider-Man to Ultimate Comics Spider-Man.

Ultimate Comics Spider-Man Vol.1: The World According to Peter Parker opens a fresh new read for Spider-Man fans. It picks up the aftermath of Ultimatum and entirely jumpstarts the current situation Peter is in. It also changes the way Spider-Man fanatics see Peter’s life and gives them a brand new excitement, a whole bunch of brand new characters, and a brand new story to follow and to keep track of.

It has been six months since the Ultimatum wave laid New York and a new chapter in the life of the teenage webslinger unfolds. The Daily Bugle is no more, the Kingpin has been assassinated, Parker works as a cashier at Burger Frog, Midtown High has another superhero roaming the halls, and surprisingly the people of New York adores Spider-Man and not think of him as a masked vigilante. Even the cops are asking for his autograph! Very unalike to the N.Y.P.D. cops who shot Parker on his leg in the 2012 film The Amazing Spider-Man.

But it’s not only how smooth Parker’s life is heading that is featured in this debut volume but also the rough paths he has to take and discover. His got some issues too: a new girlfriend earning all kinds of drama from the old one, Aunt May turning her modest Forest Hills home into a boarding house for wayward youths and an “electrifying” Mysterio causing havoc in the city and troubles for Spider-Man.

When Aunt May took Johnny Storm a.k.a. the Human Torch in their house, everything was not as it seems to be and definitely not normal for a normal house to shelter homeless teen superheroes. Parker even questions the whole super-friends-living-under-one-roof thing that he thinks will be suspicious to the neighbors. When it comes to doing the chores, Johnny doesn’t even do chores and plans to do the “Peter Parker/Spider-Man” thing which is to get a secret identity and go to school unnoticed while having a black hairdo. It was successful except for one person– MJ who instantly realized it was Johnny. Even when he spoke with an accent.

Kitty Pride and Bobby Drake (Iceman) were also accepted in the house and became part of the odd family. They too changed their get-ups and pretended to be Peter’s cousins. They all now go to the same school where Peter goes to.

What I like about this relaunch of a Spider-Man storyline is its abundance of realism especially to the headmaster of Parker’s school who had an issue with accusing Parker as Spider-Man before for the sole reason that he sees Spider-Man as a danger not only to the institute but also to the safety of the students. Centrally to the safety of the students. Even though most people see the webcrawler as a hero, he is still a bringer of fear and death because when he do heroic stuff, evil follows him wherever he goes. Even in school.

The comic brought realization that villains never stop at one point. They continue to do evil threatening everyone around Peter. Friends, family. Everyone. The villain in this book is at first I thought to be Electro (Ultimate) because of his static appearance but it was not-the-typical Mysterio who wears a green astrosuit but a sleek black leather outfit with his head ghastly blue.

One more epic matter in this new storyline is the mysterious hooded vigilante sweeping off crime before Peter could even retaliate. The cops give the glory to Spider-Man who had only just came to the crime scene where the hooded man finished off the criminals. In the end of the comic book, it was revealed who the mysterious man really is. Peter doesn’t yet know that he personally knows who the mystery cloaked man is. The coming volumes will surely be a thrilling adventure!
Posted by John "Zanziber" Rogers at 6:00 AM No comments:
Email ThisBlogThis!Share to TwitterShare to FacebookShare to Pinterest
Labels: Reviews 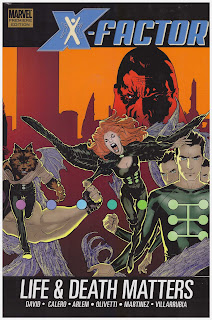 This volume ties in with Marvel’s Civil War project, although were it not for the odd snippet of dialogue and the reproduced covers saying so, there would be little indication. It’s obviously not an event that greatly interested writer Peter David, and X-Factor’s participation is merely tangential, although a point of view is established. Their primary concern is the ongoing interference of the Tryp Foundation.

David particularly enjoys the narrative possibilities supplied by Layla Miller, the girl who knows stuff, primarily the relatively short term future. He frequently supplies her with oblique snippets of dialogue that only reveal their meaning several pages later. This could become tiresome, but David is clever enough not to over-play the game, yet for almost one entire chapter he has her sitting on the stoop passing a few well chosen words to those in the area. In another chapter she drops a complete bomb.

Other cast members are equally well developed, with Madrox learning elements of his past, Siryn refusing to process information most would consider traumatic and Monet for once being only the second most insufferably arrogant character featured. That’s because Quicksilver also drops by. A colleague of some current X-Factor members in a former incarnation of the team, he’s now able to restore powers to mutants who’ve had them removed, although not always with the desired consequences.

The dialogue is so crisp and the interaction so enjoyable that it matters little that there’s minimal traditional superhero action, although when it occurs, it resonates. Even revealing that a shocking and unpredictable ending comes from nowhere, yet is completely consistent, won’t make it any easier to see coming.

One tiresome aspect of both this book and the series as a whole is the seeming unwillingness of any artist to commit to more than a handful of chapters. It’s not that the artistic styles of Renato Arlem, Dennis Calero, Roy Allen Martinez and Ariel Olivetti are completely incompatible, but four artists for a mere six chapters? Really? The series continues with Many Lives of Madrox.
Posted by John "Zanziber" Rogers at 6:00 AM No comments:
Email ThisBlogThis!Share to TwitterShare to FacebookShare to Pinterest
Labels: Reviews

Grendel: The Devil Inside 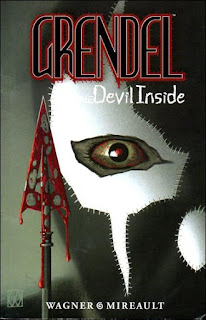 Title: Grendel: The Devil Inside

Grendel is a character who comes close to defying description. He's inhabited a number of people over time, and the only constants through these stories are his psychosis and distinctive mask. In this chapter of Wagner's multi-generational saga, Grendel possesses a down-on-his-luck stage manager in a near-future New York, and pushes him into a murder spree.

This tale, which originally appeared as a three-part miniseries in 1987, is a product of its time. Wagner's oblique script seemed daring and naturalistic then, but now comes off as coy. Similarly, some of his narrative techniques seemed groundbreaking at the time (e.g., the narrative captions displayed as handwritten journal entries), but now feel quaintly similar to contemporary works like Frank Miller's Batman: Year One and Alan Moore's Watchmen . Mireault's art ages better (with the exception of his design for the police detective, who sports a Flock of Seagulls haircut), retaining its "underground comix" edge and conveying a sense of a desolate, urban environment without sacrificing clean lines or clear storytelling.

Given Wagner's reluctance to resort to straightforward exposition, this isn't a book for casual readers, who will likely miss some of the resonance that Grendel aficionados will find rewarding. However, longtime fans will welcome this reprint of one of the more innovative chapters in Wagner's 50-plus–part saga.
Posted by John "Zanziber" Rogers at 6:00 AM No comments:
Email ThisBlogThis!Share to TwitterShare to FacebookShare to Pinterest
Labels: Reviews 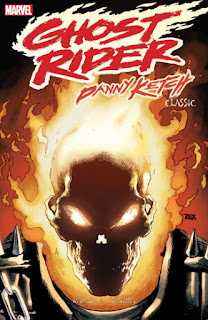 Ghost Rider continues to be a hot ’90s commodity at this point. The series really was taking off in its run and back issues were hard to come by.  I can remember paying $10 for number #1 (which was high for the time) and now it is possible to find it in the dollar bins at some comic book stores. A special glow-in-the-dark cover for Ghost Rider (2) #15 also became a big hit for fans and collectors.

The Danny Ketch Ghost Rider is definitely a product of the 1990s. He isn’t very relevant today and it is almost more fun to go back and read these issues to see how much comics have changed in a couple of decades. What once was “cool” is now “lame” but soon it might be retro and then everyone is happy…I just don’t think it is retro quite yet…but bring on Darkhawk and Sleepwalker!
Posted by John "Zanziber" Rogers at 6:00 AM No comments:
Email ThisBlogThis!Share to TwitterShare to FacebookShare to Pinterest
Labels: Reviews
Newer Posts Older Posts Home
Subscribe to: Posts (Atom)