End of an era

This week, I made the decision that I have been struggling with for quite some time.

For many, this would have been a very easy decision to make... considering all the information. For me, it was an exhausting debate that has taken almost a year to decide.

In 2009, I learned that IDW was reviving G.I. Joe with a new comic book series. I felt the call back to purchasing new comics. 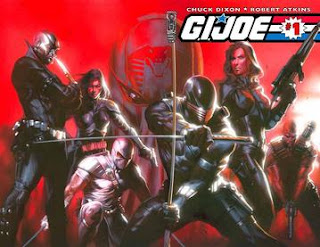 I went to my LCS, Tony's Kingdom of Comics & Collectibles and signed-up for a subscription box.

I started with the bare minimum of titles, but that grew soon. I learned that Lady Death was coming back to comics, so I had to add that to my list. In 2010, IDW started G.I. Joe: A Real American Hero right where Marvel had left off. Since this was the title that brought me into comics in the first place, it was the flagship of my entire subscription.

Over the years I added and subtracted so many title from my list. There are some titles that I read the trades for now that I really wished I had jumped on when they began coming out in single issues. There are also many titles that sit in my collection that I lament every buying.

While my individual issue collection continued to grow, I occasionally realized that I wasn't even reading the comics I would buy. I would pick them up, enter them into my database, and then house them in one of the several long boxes I have. And I got caught-up into buying variant covers for so long. I got obsessed with the collecting.

Since beginning this blog, I have grown my collection of trades. Some titles I never thought I would ever own, and many that I'm glad I picked-up. I don't feel that obsessive over my trade collecting, and I do read every single one before it is shelved. In this way, I feel that it is a more healthy habit of collecting.

I pick-up the books that are in my box, and I let Tony know that I will no longer be collecting new issues.

I had made a promise to myself last year that once I had completed my Marvel collection of G.I. Joe: A Real American Hero, I would stop buying new comics. The last issue I needed, #154... I found on eBay in the United Kingdom. It was in excellent condition, and the price was lower than anything I could find in the United States.


I want to thank Tony Grove for being the best LCS owner I have ever had the pleasure of meeting. This isn't a goodbye... this is a see you again soon. I'll be back for trades and the occasional Funko Pop, you can bet on that.
Posted by John "Zanziber" Rogers at 4:03 PM
Email ThisBlogThis!Share to TwitterShare to FacebookShare to Pinterest
Labels: Life, Opinion, Tony's Kingdom of Comics