Rise of the Dungeon Master: Gary Gygax and the Creation of D&D

Title:  Rise of the Dungeon Master: Gary Gygax and the Creation of D&D 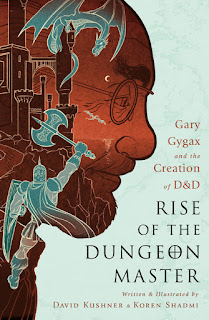 Storytelling was never the same after Dungeons & Dragons. When players, guided by a dungeon master, knit a dense narrative whose many threads are each supported by their neighbors, it makes the case that many voices are greater than one. This is the pitch on which Dungeons & Dragons stakes its brand.

We see the same technique in Rise of the Dungeon Master: Gary Gygax and the Creation of D&D, a new graphic novel about how cherished D&D co-creator Gary Gygax birthed Dungeons & Dragons. Together, author David Kushner (Masters of Doom) and artist Koren Shadmi animate the characters orbiting Gygax throughout D&D’s origin story. It’s not just the combination of narrative, dialogue and illustration that gives Rise of the Dungeon Master the multi-voiced feel. Kushner’s chapters begin with second-person callouts like “You are Ernest Gary Gygax” or “You are [co-creator] Dave Arneson,” continuing that conceit throughout the tales of poring over miniatures and calculating stat tables. It’s a bid for readers’ emotional investment. It works. Rise of the Dungeon Master is an enchanting history of Dungeon & Dragons, and of Gary Gygax, that you can read in one sitting.

And yet, perhaps Gygax has enjoyed enough time on D&D’s altar of hero worship.

Rise of the Dungeon Master is about the first, and the most authoritative, dungeon master, the face and the brand identity of a franchise that lives and dies by its players and not by its personalities. But as a fundamentally participatory storytelling medium, D&D’s origin is owed to the players, not just the dungeon masters. As of now, their voices are eclipsed.

This graphic novel is actually the second book to fully chronicle the life of Dungeons & Dragons’s much-venerated co-creator. The first, 2015’s Empire of Imagination, written by Gygax devotee Michael Witwer, was almost as much fanfiction as biography. With broad strokes, Witwer painted the picture of a Gygax who was in turns a loving father and strict superintendent of the Dungeons & Dragons franchise. Witwer’s narrative is that Dungeons & Dragons sprung from the enterprising, tactical mind of its genius creator, with a little help from co-creator Dave Arneson, a rules guy, and a lot of resistance from soulless suits who hoped to wrest D&D from Gygax’s prying hands (In 1985, the company Gygax founded to publish D&D ousted him.)

While Witwer’s focus was on the business of Dungeons & Dragons, Kushner and Shadmi’s tale dwells more on its brand personality, with Gygax as the face of that brand. Kushner’s narrative of how Dungeons & Dragons grew from a whimsical take on wargaming to a collaborative fantasy game is a smooth one. Gygax grew up as an all-American child of Lake Geneva, Wisconsin, where he would roam the town’s underground tunnels and shoot birds with his BB gun. At age 18, Gygax discovered H.G. Wells’ Little Wars, a wargame that had players—“boys” and “that more intelligent sort of girl who likes boys’ games and books,” the book quotes—control infantry, cavalry and artillery to play out battles. Tactics took a front seat. Gygax, a devoted rules enthusiast, relished in outthinking his opponents.

Gygax rejected the “tedious” story and quippy dialogue of Lord of the Rings, today a reference point for Dungeons & Dragons, preferring Robert E. Howard’s pulp world of Conan the Barbarian. It was Conan’s sword-and-sorcery adventures that inspired Gygax’s Chainmail, his first role-playing game for medieval miniatures. Later, Gygax and Arneson would pitch its expanded fantasy ruleset, which it eventually dubbed Dungeons & Dragons, as a tactics-heavy fantasy wargame.

It is he, the smiling, all-knowing dungeon master, who controls the game’s mysteries. An afterthought, players are the puppets who act out the fantasy. And yet, Kushner writes, “D&D will live and die by word of mouth.” Well, who are these players who proselytized the game? How did their write-in rule suggestions make their way into official material? Rise of the Dungeon Master doesn’t say.

Today’s Dungeons & Dragons adventures ask more of the player and less of the dungeon master. Scenarios are open-ended. Dungeon dimensions are less particular, to leave room for players’ whimsies. On top of their race, class, alignment and stats, today’s character sheets want to know why the player adventures, and what they ultimately hope to gain. Today’s Dungeon Master’s Guild, an official D&D website that publishes anyone’s adventures and additions to the game, tells us who really owns its legacy. It was Gygax who originally fought against making the ruleset open source.

Rise of the Dungeon Master is a masterful telling of the story of Gygax, his co-creator and collaborators, but it is done in service of the almighty DM. Today is the age of the player, and we are a vital part of the history of Dungeons & Dragons sorely missed in histories such as these.