It was great to be back at EUCON after not being able to go last year. I enjoy going to all the local events, and sometimes I wished there were a few more. If I have to be honest, I think there are almost enough for my actual ability to go to each of them.

Unfortunately for me, the photos that we took at this years event didn't turn-out so everything I use is courtesy of someone else. I feel like the last few events I've been to, I've had some kind of technical difficulty. My deepest apologies for the delay in posting this recap of EUCON.

When I arrived, I noticed that yet again the parking lot was nearly filled to capacity. I'm glad that there's not a charge for parking as there usually is for events like Rose City Comic Con, Cherry City Comic Con or Emerald City Comic Con.

Upon crossing the threshold of the entrance, I was taken back by how much larger it had gotten from the first year. And right there was Corvallis' own Matt's Cavalcade of Comics with his huge display of Funko Pops. I always appreciate stopping at Matt's when I go to events because there's always several Pops that I need for my collection. This year was no different.
Another good thing about the local events, I always get to re-connect with several Comic Book Covers 4 Cancer contributing artists. This year I was fortunate to touch base with Shawn & AnnMare Cruz from Corrosive Comics Studio, Robert "Floydman" Sumner from Planet F Studios, Ron Randall, Kristel Joslin from Kristel's Kreations, Randy Emberlin and even Jason Metcalf.

As I was strolling around, taking in all the sights, I noticed that Toys for Tots was even represented at this years event. As I've mentioned before, I appreciate seeing non-profit's at comic events.

If I had to find one thing that disappointed me it would be the fact that some of the celebrities that I was looking forward to meeting cancelled. I know this is par for any event and it isn't something that EUCON could control.

When I hear that both wrestlers Paige and Alberto Del Rio were going to attend, I was considering finding their action figures for them to sign.


The first celeb that was announced for EUCON this year was Cooper Andrews from The Walking Dead. I was hoping that my friend Scott would be able to add another autograph to his growing collection on his Walking Dead comic he received as a Christmas gift from his wife a few years back. 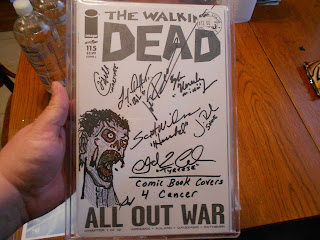 When I first hear that he was only able to make it on Saturday due to a filming conflict, my thoughts raced to the idea that he had to go film Talking Dead because his character, "Jerry", had died. Then it was announced that he wouldn't be able to attend at all, I was certain that I was right. Of course they wouldn't want an actor attend an event the day before their character was going to be killed off the show. On Saturday, I found this posted on Facebook and my heart sunk.

I'm eagerly looking forward to next years event. I know that for as good as this year was, next years will be even better. If going to Rose City Comic Con for Comic Book Covers 4 Cancer doesn't pan out, I think that I will work to focus my attention to representing at next years EUCON. As much as I would love to be able to attend both for the full duration to help spread the word for #CBC4C, I doubt that I would be able to afford doing both. I'm just starting to work the numbers now. If I can budget for having enough for both, you will see it here.
Posted by John "Zanziber" Rogers at 4:50 AM
Email ThisBlogThis!Share to TwitterShare to FacebookShare to Pinterest
Labels: book signing, Emerald City Comic Con, Eugene Comic Con (EUCON), Rose City Comic Con