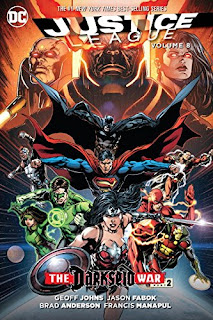 This volume contains all the big beats that are important to know if you’re reading the DC comics coming out each week. That includes Jessica Cruz becoming a Green Lantern, a major turn for Superman that lead to his death, and a reminder as to the last time we saw Grid. No doubt, Geoff Johns has big plans for whoever takes control of the malevolent artificial intelligence of Grid. There are also major developments involving Wonder Woman you shouldn’t miss either.

As the big climactic issue, you’re going to get all the punching and kicking that’s good for you too. That includes a slugfest with Mobius who certainly looks cool as he pushes the Justice League around. Most importantly, there’s a physical battle raging whilst an internal one takes place. The characters are emotionally invested in a variety of ways which only enhances the action.

Then there’s the art, by Jason Fabok and Francis Manapul, that’s out of this world good. The choreography is top notch and the detail impressive. Because the quality of their art is so high you get the sense that you’re reading a book that will never be put on the big screen due to its scope–it’d simply cost way too much money. Brad Anderson outdoes himself on colors as well, making even the most depressing crumbled city shot look bright and vivid.

Since so much happens for so many characters–Johns appears to be trying to manipulate the futures of many characters–there isn’t enough time spent specifically on every character to have it feel meaningful. Like a breadcrumb, Johns is showing us a new direction, but doing it so quickly it’s hard to feel its impact. There are a lot of characters being juggled in this volume and thus it’s hard to get invested into one character’s story with so much cutting going on.
Posted by John "Zanziber" Rogers at 6:00 AM
Email ThisBlogThis!Share to TwitterShare to FacebookShare to Pinterest
Labels: Reviews