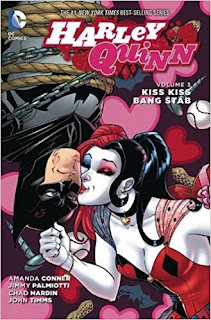 Either Harley Quinn's getting funnier or, more likely, it was funny all along and I'm getting better attuned to its humor. After a rough first volume, I liked Harley Quinn Vol. 3: Kiss Kiss Bang Stab a lot, and in different ways than I did the second volume (probably closer to the authors' intentions). Harley isn't laugh-out-loud funny so much as the puns are occasionally happily groan-worthy, and in her misadventures there's a certain joy simply in watching Harley run around like a Looney Tune. That might not be my everyday fare, but set as it is in the DC Universe (and featuring a Batman appearance, this time), it's a refreshing change of pace.

Kiss Kiss Bang Stab collects just issues #14-16 of the main Harley series plus an annual and two specials. This would be a wholly disappointing number of regular-series issues for a series with a strong ongoing story (the New 52 Teen Titans series did this once), but for a book as random and episodic as Harley, it's no big deal. Writing team Amanda Conner and Jimmy Palmiotti are present throughout, and the closing regular issues reference the annual and specials in such a way that it all feels of a piece; further the specials are arguably even better here than the regular issues.

There's a similarity across the Harley Quinn Annual #1, the Holiday Special, and the Valentine's Day Special, in which they all see Harley committing crimes or otherwise misbehaving (stealing parachutes, stealing money, secretly giving people puppies), generally in the interest of doing a good deed. This is the fun of Harley Quinn, that she and her tenant-friends in her Brooklyn apartment building are generally kind-hearted people, nice to one another, who do completely "nutbucket" things (as the book likes to say) in accomplishing their goals. Like Mark Waid's Impulse series of yore, there's no barrier between thought and action for Harley, and so she's the entertaining pure id that the reader might long to be but can't.

Ultimately, however, I liked the specials more than the regular issues, and it's precisely because of an extended sequence in issue #17 where Harley runs into a burning building, rescues the trapped occupants, and takes out a fiery supervillain called Tinderbox. There's "supervillains" in the other stories (including Dynamic Duo analogs the Mighty Carp and Sea Robin), but the issue #17 sequence seemed profoundly of superhero comics instead of being born from farce, and I found that less effective; that's not entirely what I'm looking for from Harley Quinn comics.

The Valentine's Day Special has a similarly incongruous moment. Harley brutalizes a billionaire to get the money to bid on a date with Bruce Wayne, which is plenty fun, and then also that Conner and Palmiotti have Bruce talk his way out of the Mighty Carp's kidnapping entirely peacefully (just before Harley bursts in guns a'blazing). But even as I acknowledge that realism and continuity are fluid concepts in the Harley-verse, I had trouble believing Bruce Wayne would actually take a date with Harley (a person one step removed from the Joker, mind you), and then the sequence where Batman semi-kindly scolds Harley seemed like a conversation Batman would have with Catwoman Selina Kyle, not Harley. Here again, what I like is Harley as goofy anti-villain, not necessarily Harley as true hero/anti-hero.

But it's all Conner and Palmiotti, and so it's hard to argue there's not a consistent vision for the character in this book. Rather, I think the whole book's Harley is purposefully inconsistent, as in a great set of pages in issue #16 where first, Harley-as-Dr. Quinzel comically dominates an old man obsessed with S&M, and then a page later, perfectly straight, Quinzel performs CPR on a dying woman, with serious and scientific narration boxes to match. One page after that, Harley daydreams about getting into bed with love interest Mason, only to be confronted by a ghastly Joker. That there are multiple personalities here is an understatement, but also clearly the writers have fun with Harley without making light of her, recognizing the character's issues and facets across many interpretations. (And further, two issues later the writers have wacky Harley again pitting a roomful of wannabe Harleys against one another in bloodthirsty battle.)

This might seem obvious, but a self-referential bit in the Valentine's special opened up the Harley title for me considerably. Just before a wonderfully cartoony Harley dream sequence by Ben Caldwell, Harley's talking stuffed beaver Bernie (yes) explains that this is the part of a Harley story where she has a dream and a guest artist illustrates it (giving the regular artist, Bernie slyly admits, fewer pages to finish). I've seen these hallucinations before, but in my
naivete I think I thought "this is just messing about" and not "this is a cool opportunity to see someone else's interpretation of Harley." Recognizing that allowed me to relax into the process more, and indeed there's plenty of great art in this book -- John Timm drawing an attractive "regular" Harley in the Valentine's special, Mauricet's cartoony Harley and Brandt Peters's chibi Harley in the holiday special, not to mention Darwyne Cooke.

It all adds up to a good Harley Quinn Vol. 3: Kiss Kiss Stab Bang, and I'd be more eager than I have been before to read the next volume. Despite my mild concerns about the regular issues, the new "Gang of Harleys" seems like a whole lot of fun (and mayhem) and I look forward to following them. Also the next collection seems to include eight regular Harley Quinn issues, which more than makes up for the shortfall here.
Posted by John "Zanziber" Rogers at 6:00 AM
Email ThisBlogThis!Share to TwitterShare to FacebookShare to Pinterest
Labels: Reviews