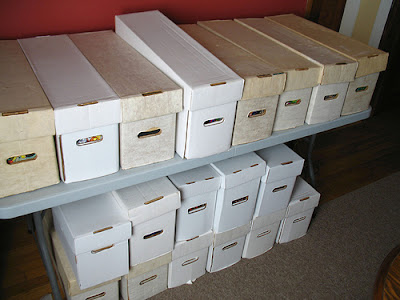 I have been collecting comic books for over 30 years now. I have a sizable collection that I cherish, but I just don't feel the same about getting new books as I have in years past.

I don't typically read individual issues of a comic any more, preferring to instead read a trade paperback and get a better read. Collecting individual issues has become more of a rote than a passion. Years ago, I would be thrilled to be adding issues to my collection. Now, I find the task laborious and tedious.

When I go to comic cons, I still enjoy being able to go to writers and artists to get my books signed. Do I really need to continue collecting the latest issues of titles that I'm interested in, but will never take time to actually read? There are only a handful of titles that I really would like to keep current on, for whatever reason that I can't explain. Thinking of them specifically, it may be a sense of nostalgia because they take me back to my childhood. Series like G.I. Joe: A Real American Hero and Star Wars still have my interest and call to me, whereas my passion for collecting Lady Death has seriously diminished.

I can remember when my love of Lady Death began to wain. When LD started taking-off under Avatar Press/Boundless Comics, for every regular issue, there would be 3 variant covers. As a completionist, a some may call my collecting habits a bit manic, I had to get as many of them as humanly possible. For every # in the different series, I would be purchasing 4 different covers from my LCS on my subscription. There would be times where additional variant covers would be published, and I would buy them as well. These additional covers were limited and so carried a higher price tag.

At the time, it really didn't matter that much to me because I felt like I need to have them to keep my collection in tact. When I couldn't get the variants at my LCS, I would have to turn to online sources to get them. There were so many it felt like I was living through the 90's again with all the various special covers that were published. Examples such as:


When they finally stopped publishing Lady Death for a time, there was a part of me that was relieved. I felt like a huge weight had been lifted from my shoulders, and I could again breath easy. But now, every time a new title comes-out, it seems like publishers flood collectors with a series of variant covers again. On Comic Collector Live, there are 121 individual entries for Star Wars #1 from Marvel Comics! That's insanity!

I admit that money also plays a role in this dilemma, as if I purchase less comic books for my ever-growing collection, I will be able to use that money for other purposes such as paying bills, expanding/continuing my fundraising activities with Comic Book Covers 4 Cancer, growing my collection of Funko Pops, etc.

I don't even know every title that I have on my subscription list. I just pick-up the comics as I can, enter them into my database and add them to the collection. I know that at least 1 of the titles that I get is being published twice a month! ACK!

As I mentioned before, there are some titles that I think I will continue to collect for pure nostalgia of it. I feel like I need to let go of several titles from my list. I don't want to give-up comics altogether, and I will NEVER stop collecting, reading and reviewing trades and graphic novels, but I know I need to step back and take an introspective look at what's on my list versus what I actually want to continue receiving.

I'm not going to say that this is the biggest decision of my life, but it does feel like a huge change for me.

Thank you for taking the time to read this. Writing this post has been quite cathartic and it feels like a lot of what has been weighing me down recently is now lifted. 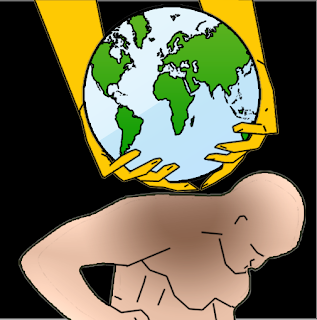 On that note, I think I will also provide those of you who actually read my blog through to the end a little update as to what my continued plans are for this blog.

I know that I have been remiss of my duties of producing a regular series of reviews, and for that I apologize. I haven't been reading as much as I would like, and I actually don't have a large stack of trades that need reviewed as I normally have had in the past. I will be devoting some time this week to writing, as I have decided to take some time to myself from work. I hope to have some reviews scheduled for at least the next month or 2 by the end of the coming week.

As those of you who also follow my non-profit, Comic Book Covers 4 Cancer, I have been actively working to get attending artists for this years Rose City Comic Con to donate a cover at the event. I'm proud to say that we have already lined-up 4 new artists who will be contributing to our cause: Katie Cook, Chip Zdarsky, Jim Mahfood and Valentine De Landro. I have reached-out to many others, and will continue to provide updates on our Facebook page.

I'm also proud to announce that we will again be receiving a generous donation of 10 grading services from CBCS at RCCC. The last time we joined forces, the bids for the covers were incredible. I can't wait to see what will come from this years donations. Here's what we received last time:


So excited for September!
Posted by John "Zanziber" Rogers at 6:12 AM
Email ThisBlogThis!Share to TwitterShare to FacebookShare to Pinterest
Labels: Life, the Universe and Everything