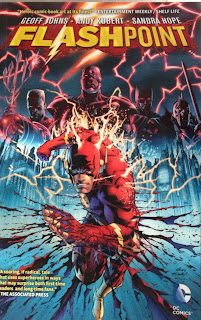 The DC Universe has restarted before, with a bang. With Flashpoint, the DC Universe begins again not with a whimper, but with a whisper. Flashpoint places an astounding focus on interaction rather than action; it is perhaps the most accessible of all the great DC Comics events, one that may disappoint long-time fans even as it has the best chance of standing the test of time for new ones.

By the end of the first issue of writer Geoff Johns's Infinite Crisis, we'd already seen Bizarro beat the Human Bomb to death; the number of deaths and decapitations would only rise before the story ended. The body count rose equally quickly in Johns's Blackest Night. Each of these stories were two-to-three issues longer than Flashpoint, and yet I believe those books had really started by the second issue (the Indio Tribe whisking away Green Lantern in Blackest Night, for instance). In contrast, Flash Barry Allen is powerless until the third issue of Flashpoint and spends most of those three issues in the Batcave talking to Batman -- almost half the miniseries -- and ultimately only engages in one or two action sequences in the entire book.

That's not wrong, necessarily, but to be sure it singles out Flashpoint as something else -- a different kind of event miniseries than Geoff Johns has delivered before.

Flashpoint does present the first appearance of the DC New 52 costumes (and some characters), but the new continuity is not its focus. Whereas in DC's ultimate continuity-shattering tale, Crisis on Infinite Earths, the Golden Age Superman Kal-L famously wakes up in a world that no longer remembers him, Barry Allen never explicitly understands that the "real" world has changed (things are the same, Barry says, with a fourth wall-breaking glance at the camera, "as far as I can tell"). In this way -- and perhaps because Flashpoint's role in the DC New 52 relaunch was decided after the story's original conception -- Flashpoint is not about continuity-cleaning in the way the other events are. Flashpoint has that as its result, but not as its focus.

Instead, Flashpoint examines one of the central conceits of the DC Universe, that the death of a parent might inspire a child, perhaps obsessively, to a lifetime trying to make up for that loss. Batman is the best example of this in DC Comics, of course, and Flashpoint is very much about Batman even if Bruce Wayne only appears in a handful of pages. Superman is another, the consummate orphan even if, depending on your continuity, he never much knew his Kryptonian parents.

And under Geoff Johns's pen specifically, over the past five years or so, we've seen Superman lose his father Jonathan Kent, Green Lantern Hal Jordan's origin revised so his father died in Hal's childhood, and then Flash Barry Allen's origin revised so his father went to jail for the murder of his mother (and this is aside from Johns's creation Stargirl who dealt with her father's abandonment). It got to be repetitive, frankly, and possibly Johns knew it.

Barry Allen takes a Parallax-like turn in Flashpoint, only worse. The shocking revelation in issue five is that the alternate Flashpoint reality stems not from the villainous Reverse Flash, but from Barry himself having ventured to the past to prevent Zoom from murdering his mother, thus mucking up history but good. Barry's depression over his mother's death -- for which he's been so uncharacteristically distraught that the Flash family staged an intervention in Flash: Road to Flashpoint -- has him so unhinged that he broke superhero rule #1 and messed with time. In the context of Flashpoint, at least, Johns offers no excuses or mitigation for Barry's act -- Barry knew what he was doing was wrong, thought he could get away with it, and nearly destroyed reality instead (with consequences he himself can't perceive).

Johns suggests that this is the end of "parent's death as inspiration for heroism" in the DC Universe. Barry's sorrow over his mother's death has reached outlandish heights, culminating in Flashpoint. Hardly, we know, would Barry's parents want him to torture himself to this extent in their memory -- and if Barry's familial reason for heroism dissipates as he realizes the error of his ways, then so too do some of the others start to thin. Childhood trauma has long since stopped being an effective excuse for Bruce Wayne's nocturnal activities, and when Barry delivers a time-tossed letter from Bruce's father, and Bruce cries and thanks Barry, the reader gets a sense of something ending. These are grown men, unknowingly entering a new universe supposedly more "modern" than the one they just left, and Flashpoint brings a sweet, gentle end to childish things.

There are no absolutes in comics, of course, and even as I write these lines, I have no expectation that this is the last time we'll ever see Batman kneel before the graves of his parents and swear vengeance for their deaths. I was surprised, however, that Johns even kept Barry's mother's death "in continuity," so to speak; I imagine it might be a while before we see Johns visit that particular well again.

As Blackest Night re-established for modern audiences the friendship between Green Lantern and the Flash, Flashpoint does the same for Flash and Batman. This has so far been a juggling act on Johns's part -- Batman missing the Flash at the end of Justice League: The Lightning Saga is one of my favorite comics moments, but for the majority of the time since Flash Barry Allen has been resurrected, Batman Bruce Wayne has been presumed dead. When Barry tells the Flashpoint Batman that Bruce was one of his closest friends, we believe it to be true but in fact we've yet to see Barry and Bruce have a substantial conversation in any comic since Barry's return.

Flashpoint is essentially proof of its own hypothesis; the six-page conversation that Barry and Bruce have in the end is their first, really, and ties up a hanging thread from Johns's Flash stories. It is not the only thread that needed tying, but it does bring to a satisfactory close one aspect of the pre-Flashpoint Flash storyline.

Johns does not present Cyborg very strongly in Flashpoint -- Johns's Cyborg Victor Stone comports himself well, but he's far from the dynamic breakout star of Flashpoint that Mera was in Blackest Night, and also Cyborg simply disappears with no closing arc at the end of the book -- but I thought Johns's use of Barry Allen here with Vic offered a unique opportunity. Had the Flash in the book been Wally West, his relationship with Vic would be more emotional, like Barry and Bruce; had it been Superman, his relationship with Vic would be more paternal, like hero and sidekick. Barry remarks on Cyborg's increased armor, but otherwise accepts him for who he is; there's no diminutive applied to Cyborg, but rather he's simply a hero.

This is a rare moment for Cyborg -- better, perhaps, than in the New 52, when Cyborg may be a Justice Leaguer but Superman will be back to being Superman. In a rare pointed moment, one of Johns's S.H.A.Z.A.M. kids (the real breakout stars of the book) notes that "perception is reality," and it couldn't be truer here. Cyborg's role with the Justice League may be retroactive continuity, but it's important; more so is seeing Cyborg here, if only for a moment, as the preeminent hero of some DC Universe.

Andy Kubert's art helps Flashpoint's slower moments, to be sure. His crowd scenes are no slouch, but the real power is in his close-ups, whether it's a young Barry Allen on the first pages, the gathered Flashpoint heroes on the Gotham rooftops, or Bruce Wayne with tears in his eyes at the end. It's a rare treat to have a DC Comics mega-event drawn just by one artist throughout; I very much wish DC would leave the covers for the end and let a book like this read like a graphic novel. I'm looking forward to Kubert's guest-stint on Action Comics coming up (though only one issue, sadly); it seems to me that Kubert's art in Flashpoint is slightly stronger in the early issues with inker Sandra Hope than it is later in the book (and the most important reality-warping page, in issue five, looks unfortunately quite hurried), but I'm happy to see him on other titles either way.

At the end of the DC Universe as we know it, a reader expecting Crisis on Infinite Earths will be sorely disappointed. There's not much here, either, for a reader who wants the white-knuckle action of Blackest Night; Flashpoint is closest, in terms of its self-containment, to Final Crisis, but Flashpoint is minuscule next to Final Crisis's scope. Flashpoint is instead exactly what we heard it was from the beginning but perhaps didn't quite believe: a Flash story bigger than some but much smaller than others, which mostly focuses on Flash and Batman. Despite that Flashpoint may not have some of the "wow factor" of any of DC Comic's other event stories, it wins in one crucial area -- accessibility.

Flashpoint is perhaps the most accessible event story DC has ever produced, the one I'm most sure I could give to a new reader and they'd understand it. For a long-time reader, it may feel somewhat unsatisfactory in the end -- what, no red skies? -- but at the dawn of a new DC Universe, maybe this very simple book is exactly what we need to start off a new day.
Posted by John "Zanziber" Rogers at 6:00 AM
Email ThisBlogThis!Share to TwitterShare to FacebookShare to Pinterest
Labels: Reviews