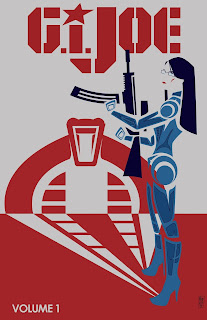 G.I. Joe has won the war against Cobra, or so some would have you believe. Cobra has apparently given up the fight, and suddenly transitioned to a global peacekeeping force, set to rival the United Nations. In the aftermath of apparent victory, the Joe’s political enemies come out of the woodwork, along with a laundry list of covert agencies looking to siphon off the Joe’s resources, and claim their top operators for themselves. The team is in for a new kind of fight, one that takes place in the shadowed halls of the power brokers and puppet masters, not on the war-torn battlefields that they are used to. All the while, Cobra bides its time, plotting and waiting to strike at the perfect moment… The moment that will bring about the fall of G.I. JOE!

As a fan of both the original toy line, and of the Marvel comics series (mainly due to the writing by Larry Hama), I originally approached IDW’s version of G.I. Joe with a bit of trepidation, not knowing what to expect. After reviewing the first issue of this series, I came away more than satisfied with the adaptation, hoping that the tone of the initial issue would be carried throughout the rest of the series. After reading this collection, I have to report that, not only does it replicate the feel of the first issue, it builds upon it. The story by Karen Traviss is light on explosions, firefights, and battlefield action; it instead takes place in the shadows, with double agents and betrayals galore, portraying a Joe team fighting not only the obvious enemies, but politicians and covert agencies seeking to disband the unit.

While there are many familiar faces included in the story (Scarlett, Duke, and Roadblock being a few), the story chooses to travel a different path, one that focuses on behind-the-scenes dealings, and on entities that have their own shadowy agendas, rather than straightforward action. Despite having a number of parallel ongoing subplots, the flow of the story is never overwhelmingly convoluted, and the motivations of the various players are readily determined. This is a good portrayal of covert, black-bag ops, with the emphasis on covert. The Joe’s resident ninja would have a field day with this type of stuff, but unfortunately (from a long term fan’s perspective), Snake-Eyes is nowhere to be found. Oh well, the story is well-crafted and highly entertaining, even without his presence. Good stuff, indeed.

Steve Kurth’s style of art is a rather sketchy, roughed-in approach, which works both in the full color panels of the release, and in the black and white pieces that exist in the introduction to the collection. When working with close-up shots, Kurth’s line work definitely defines his character’s outer form, and then becomes more subtle with strokes that mold the character’s overall appearance and the play of light and shadow over the figure. Drawing back into more widescreen panels, he allows the dialogue to differentiate the various characters, dropping his detail and focusing on dynamic movement. While there is a dearth of true action sequences, his depictions of the few that are contained within the release are dynamic, free-flowing, and cleanly rendered. His panel composition moves the story along, at a goodly pace, and the reader is never left confused by a sudden misplaced panel. His character composition and sense of motion are both strongpoints, and highly contribute to the success of this book.

The cover art by Jeffrey Veregge is another key component to the overall appeal of the collection. When it comes down to it, a cover artist is tasked with coming up with a concept that not only draws the potential reader’s eye, but boils down the appeal of the release into a nutshell. The first thing a new reader is drawn to is the cover art, and this is a make-or-break moment, one that defines the art of selling the overall package to a potential new fan. Veregge’s clean line work, bold character design, and retro art deco style accomplishes this perfectly. Simple yet ornately designed, his cover art never fails to impress.

All in all, this is a rather superb, utterly satisfying release. It represents my first opportunity to check up on an ongoing series, after reviewing the first issue, and I’m more than pleased with the progression of the storyline. Containing an intricate, well-thought-out plot, well-crafted interior illustrations, and eye-catching cover art, this collection is an all-around win. With more double agents and double crosses than you can shake a stick at, fans of spies and covert action teams should seriously be taking a look at this series… Seriously! Happy reading, all!