Doctor Voodoo: Avenger of the Supernatural 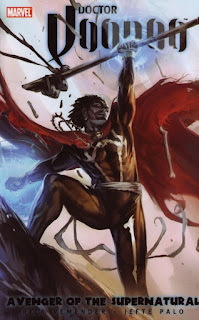 Stephen Strange held the mantle of Sorcerer Supreme for a very long time, so long that it was probably quite discouraging to young magicians in the Marvel universe. I wouldn't be surprised if many of them looked up at that glass ceiling and promptly opened a rift into the Vertigo dimension, where they could be free to climb higher and higher up the ropes of employment, cursing and having dangerous sex as they did. So for Jericho Drumm, the man known as Brother Voodoo, to assume that office after Strange's fall from grace, it couldn't be easy. It's like Truman's first week in the White House, tripping over all those wheelchair ramps. Luckily for Voodoo, he had a couple of things going for him. The help of the outgoing Nikola Tesla Stephen Strange, the wispy remnants of his twin brother Daniel who speaks only in blue, and a fine creative team in Rick Remender, Jefte Palo, and Gabriel Hardman.  But then again, maybe the creative team didn't make it so easy for him.

Rick Remender is really sort of a bastard. In the opening pages of this volume, he pits Voodoo against the nefarious Dormammu, handing the good Doctor an early and impressive victory over one of Marvel's gnarliest villains. But at the conclusion of that first issue Voodoo's dealt the hand of Doom. Little Green Riding Hood takes him on a cosmic level Tom & Jerry marathon through the nether realms in pursuit of the articles of the Sorcerer Supreme. Without getting too specific, all hell kind of breaks loose. Or a good enough portion of it to keep Doctor Voodoo scrambling for a way out in the first few days of the job. Walking away from encounters with Dormammu and Doom in one issue? It's only the start of an incredibly ambitious storyline.

What I love about Marvel's magic universe, it's arcane frontier, is the same thing I revel in with their cosmic offerings. Every word balloon's a party bag of possibilities. Forget hoary hosts of Hoggoth. How about 'psychlodermic mindphibians'? As with his Frankencastle tenure on The Punisher, Remender serves up some truly trippy concepts. His reverence for the Marvel monsters is clear, but he's also done his homework on voodoo culture and lore. In his introduction to the collection, Roy Thomas talks about creator Len Wein's initial reluctance about constructing an ongoing series around voodoo magic, concerned that there wouldn't be enough material to draw upon. Remender shows the texture of this culture, of the loas and the greater mythology. He also shows how Stephen Strange's brand of magic isn't the only way to operate in the Marvel U. That there are other demons and other planes and other approaches to this office of Sorcerer Supreme. There is a point where Voodoo is chided for his audacity, and I think that's part of what we love about what Remender's been doing at Marvel. I'll admit to being among the fans who was disappointed when he signed an exclusive contract with Marvel, thinking that company work might be a waste of his creative ferocity. That's hardly been the case. Creativity isn't about making something of nothing, but taking what you have and making something great. Remender has adopted the Marvel monsters and done some pretty compelling things with them. At first it seems that he's treating them with absolute abandon. But it turns out that pushing them to their limits and beyond is actually the best way of respecting them.

I was incredibly saddened to learn of the series' cancellation, and I have no grasp as to whether this five issue story is everything it was meant to be. If it's the organic end to a chapter or if that final issue was adjusted for truncation. Either way, this often feels like a tremendous six or seven issue story trapped within five. Those final issues tell of a large scale battle involving the entire magical community, I won't spoil the extended cameos here, but there are some real crowd pleasers. It doesn't fully gel, so for a lot of readers, this might seem like abstract magical concept after abstract magical concept. It's really difficult to make solutions seem concrete when they're anything but, and that's the tragic flaw for many stories of this kind.

Jefte Palo can draw a terrific shrunken head, and he's incredibly well-suited to capturing dire nightmares. His style is a little sketchy, but that's perfect for all these hellscapes and magician's parlors, all those faces twisted in agony. Doctor Voodoo himself is almost constantly dour, a very serious man with an impossible burden. Most importantly, Palo is dynamic. These aren't just wizards pointing wands at each other. This magic hurts. And it moves. The equally talented Gabriel Hardman steps in for sepia-toned flashback sequences that tell of Drumm's childhood and his curse. It's pure pulp, and the old man who puts a hex on the boy is one of the scariest character I've seen in a mainstream comic. Real Universal horror. There are a lot of books out there with characters three times as popular as Voodoo, and they don't look nearly as good. This was a labor of love and the look is 100% first class.

This isn't a book for every reader. It will assume you know the intricacies of Marvel magic or, more likely, that you're willing to live with a little ignorance and proceed into the dark. Which, you know, if fun sometimes. It certainly prodded at my imagination. If you're hungry for magic. If you love a little Doom. If you like more than a little audacity in your comics, it's definitely worth a peek.
Posted by John "Zanziber" Rogers at 6:00 AM
Email ThisBlogThis!Share to TwitterShare to FacebookShare to Pinterest
Labels: Reviews