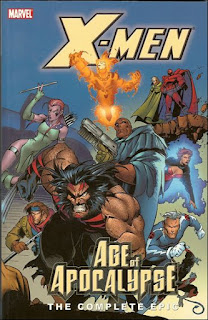 Over the years, comics (through its main genre of super-heroes) has taken to the idea of alternate realities like no other medium. Television and cinema has had brief flirtations with the concept over the years – Star Trek mirrorverse episodes, Sliders, Sliding Doors – and has recently started to push the concept to the mainstream with shows like Lost and Fringe. Comics has been actively dabbling with alternate realities since the 1950s though. In 1984 DC had one of its biggest publishing events ever, Crisis On Infinite Worlds, built around the concept, traipsing through alternate worlds in a way that a more mainstream piece of fiction would still struggle to get away with now.

The alternate reality has become a staple of the super-hero comic and it’s not hard to see why. Most comic book super-heroes have either been around since the 1940s-1960s or are tied into shared universes that have been. It’s hard therefore to take a character or a concept and completely reinvent it from the ground up the way one could with a film or television entity. Alternate realities offer that opportunity and few have done it so well as the Age of Apocalypse.

Created in the mid-90s, the Age of Apocalypse was yet another X-Men cross-over story. Unlike its predecessors and successors such as the X-Cutioner’s Song and Operation: Zero Tolerance though the Age of Apocalypse was a true “Event” with a capital E. For four months, every X-Men related book disappeared from the schedules, replaced with eerie doppelgangers. Generation X was replaced with Generation Next, Cable became X-Man, and the X-Men were no longer Uncanny but Astonishing and Amazing. Characters went through radical overhauls. Beloved heroes became amoral monsters, resolute villains turned into tragic heroes, as they all tried to survive in the world under Apocalypse’s boot heel. This wasn’t some run of the mill alternate universe where Superman happened to be going grey or most people were left-handed. This was a topsy-turvy dystopia.

It was also wildly successful, with a legacy that still continues. Despite the Age of Apocalypse being a world gone wrong that shouldn’t exist, tonnes of its characters managed to escape through into the ‘real’ Marvel universe. Nate Grey (the eponymous X-Man and alternate version of Cable), the villainous Sugar Man, the twisted Dark Beast all made the jump. Blink and Sabretooth would both reappear a few years later as core members of Exiles, along with a slightly different version of fellow AoA stand-out Morph. Exiles would later manage to return to the Age of Apocalypse and pick up Apocalypse’s son Holocaust. Recently, Uncanny X-Force went there as well, picking up the native version of Nightcrawler and setting up a new ongoing sequel series, nearly twenty years after the original event. It’s also inspired stories on several X-Men cartoons and even a video game. Not bad for a four month event.

The more immediate aftermath of the Age of Apocalypse was sporadic prequel stories through various X-Men titles of the mid to late 90s and that’s what makes up this nominal first volume of the Complete Age of Apocalypse Epic collected edition series. Which is a shame, for two reasons.

The first problem is that really, the first volume of this trade-paperback series should just be the first wodge of issues from the original Age of Apocalypse titles. Readers in the 90s were dumped straight into the event with little heads-up. Well, ok, there was a preceding storyline that showing the time travel shenanigans that lead to the change into history that created the Age of Apocalypse (reprinted as Age of Apocalypse: Prelude), but beyond that it was ‘hey, all the X-Men you know don’t exist any more, meet these guys.’ Putting all the prequel material first rather kills that. It’s similar to making someone who’s not familiar with Star Wars watch the modern prequel films before the original trilogy. It neuters the original story’s impact. Finding out that Darth Vader is Luke Skywalker’s father isn’t as suspenseful when you’ve just watched three films of him as a mewling brat and sulky teenager. While that twist is now common knowledge, a lot of readers are going to be coming to the Age of Apocalypse trades not having read it before and are going to be confronted with a first volume that pisses all over the rest of the series’ surprises. The X-Man annual included in here is especially bad as it almost blatantly explains how the whole event ends, let alone shows the fate of Nate after the series. Prequels may be set before an original story, but by their very nature they should be read(/watched/heard/played) after.

The other problem with all the prequel material in this volume is that it’s largely utter dreck. It’s painfully bad in places, in all aspects, from the writing to the artwork. The very nature of these sorts of Expanded Universe stories is that they go and shed a light on parts of a story not fully explored before, regardless of whether there’s any real benefit to doing so. And for comic book alternate realities, there’s often a case of ‘I wonder what this guy was up to during all of this?’ So here we get a story that shows what happened to Cyclops and Havok’s father, Corsair, in this altered reality, that’s ultimate points are to a) rather redundantly foreshadow Cyclops’ disillusionment with his place in Apocalypse’s regime (which, if this is the first volume you’ve read of AoA, won’t have really been fully explained or familiar to you) and b) answers continuity questions no-one was asking. Then there’s another story whose raison d’etre is, again, to foreshadow Cyclops’ disillusionment, while showing you what’s up with the Inhumans in the Age of Apocalypse (a question on the minds of precisely no-one). Just fuck off and let the original story deal with Cyclops’ disillusionment.

More palatable is the story that shows the early days of Magneto’s X-Men, with their initial school in Wundagore, that at least shows why Scarlet Witch wasn’t in the main series, but this again feels the need to clumsily foreshadow the main series by having Wanda, with her dying breath, tell Rogue to be Magneto’s friend in the future. Because they end up a couple, you see. And you couldn’t have accepted that without a story where Wanda tells Rogue to do it. Or the other story that shows them getting together. Sigh.

All of this would be more bearable if it was well written, but it’s really not. I’d be surprised if anyone who worked on any of this material (with the exception of Judd Winick on the lame Blink mini at the back, who was clearly sounding out ground for the later, greater Exiles) wasn’t just doing it for the paycheck. One issue is so bad that I actually couldn’t finish reading it. I just had to give up. I’ve been reading American comics for over a decade, in huge amounts and though I’ve read plenty of stuff that isn’t good, that’s only the second time I’ve ever managed to not finish something (the other being the X-Treme X-Men: Savage Land mini series about 8 years ago).

And then there’s the art, which manages to cover all the bases of crap 90s comics art. You’ve got Jim Lee/Image imitation from Ian Churchill (whose work I have a soft-spot for, I have to say, even though it’s not terrible good in this period) through to roid-rage Ed McGuinness knock-off Joe Bennett (whose art seems to be in a fight with Scott Lobdell’s script to see which can make the least sense and be more awful) and then some grotesque crap that I assume is aiming for ‘cartoony’ by Trevor McCarthy on the Blink mini. There are some very good artists present in this volume – Alan Davis, Steve Epting and Terry Dodson namely – but their art is either before their prime or compromised by poor inking or self-indulgent, experimental computer coloring. There are rafts of mistakes as well. Blink, who is quite blatantly a character with bright pink skin (though she’s described as ‘purpley’ in one issue’s script for some reason) is colored grey for an entire issue in here. One in which she is the focus character. Morph is miscounted as navy blue at one point, a mistake made worse by the fact that the panel’s reused on the back cover.

So, bad writing, bad art, no good reason to exist. The Complete Age of Apocalypse Epic volume 1 is hardly a good introduction to this influential alternate reality event. Putting this out as the first volume is a real shot in the foot by Marvel and I have to wonder how many willing customers have picked this up and been driven away from the rest of the series because of it. If you’re interested in the Age of Apocalypse, do yourself a favor and start with volume 2.