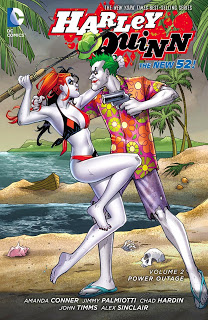 Power Outage collects Harley Quinn issues #9-13, the Futures End issue, and the Harley story from Secret Origins. Of the monthly issues, the final three are a Harley Quinn/Power Girl team-up, and the first two involve Harley's hijinks in a burlesque show and a roller derby. This combines what I liked best about the first book, Hot in the City -- Seinfeldian stories about "nothing" where Harley goes on with "normal" life in her Harley Quinn way -- with what I felt could be improved; the first book was mainly given over to a spy caper whose jokes were outside my realm of familiarity, whereas writers Amanda Conner and Jimmy Palmiotti riffing on Power Girl's costume and Thanos-analogue "Manos" is right in my wheelhouse.

What follows is a wonderfully madcap story, at times ribald, at times ridiculous. When so much of popular comedy, especially movies, creates humor through gross-outs, I appreciate Harley as a true situational comedy -- Power Girl crash lands in front of Harley, amnestic, and of course Harley convinces her that they're crime-fighting partners. The humor is often verbal, and rewards close reading -- especially as Conner and Palmiotti's Harley patters a mile a minute -- as when Harley feigns offense that someone refers to Power Girl's breasts as "crowd pleasers" instead of "party favors," or when Harley chuckles sotto voce when someone says "cups," or "mount," or "cosmic organ." There's a definite Beavis and Butthead or The Office vibe; Harley says what the reader's thinking but would be too mature to speak aloud.

Comic books take a friendly beating in this volume, between a variety of gags about Power Girl's costume and physique; the appearance of Manos, ruler of the Infinity Rings; and Harley opining about where Manos's cosmic children use the bathroom in space. As I've said before, the Harley Quinn comic is the next in a long line of parody comics -- most recently Lobo and Ambush Bug -- that serve perhaps as a kind of pressure valve for the DC Universe as a whole, the place where we can acknowledge Superman (formerly) wearing his underwear on the outside and the ridiculous window in Power Girl's uniform. This culminates, at the end of the book, in the Harley Quinn Invades Comic-Con International: San Diego special, which lampoons geek culture in general and DC Comics in specific, including a cameo by Stephen Amell (the "convention special" being another way Harley Quinn in the 2010s inherits the mantle of Lobo from the 1990s).

Again, as I get these jokes and I'm familiar with these characters, I liked all of this a lot more than Harley battling zoo animals with alter kocker super-spy Sy Borgman. Palmiotti and Justin Gray's Power Girl series got a little too silly for me at times, too, and I didn't much consider myself the right audience for the Harley Quinn/Power Girl team-up miniseries to follow Convergence. But the Harley/Power Girl partnership is riotous -- as when Harley has to ad lib an origin for Power Girl on the spot -- and if the miniseries has the same meta-interpretive tone that Power Outage does, I might give it a look after all.

Weaker here, I felt, was the Harley Quinn: Futures End issue. This is undoubtedly in part because the story has nothing to do with Futures End -- not even that there's no rampaging OMACs, but that it could be Harley Quinn: The Day After Tomorrow as much as "five years later." It's a "Harley crash-lands on a deserted island" story, which does allow the writers to make Lost jokes and Castaway and Joe Versus the Volcano jokes (maybe Tom Hanks should get a royalty). It does also include a basically Batman: The Animated Series Joker, and there's some enjoyment in this Harley and "Mr. J" interacting even if the issue otherwise distracts from the Power Girl story.

This volume also reprints the Harley Quinn origin that I previously read in Secret Origins. The story serves Conner and Palmiotti's purposes well, offering the genesis of the Harley Quinn series's stuffed beaver Bernie. At the same time, the story has a curious leap in logic that I'm not sure is purposeful or not: psychologist Harleen Quinzel enters Arkham as a patient to better rehabilitate the prisoners, but it's seemingly in the span of a panel that she transforms into a cop-killing criminal. That panel is one where the Joker kisses Harley, and we can't see her face as the Joker stares at the audience evilly. The narrative glosses over the change, and I wonder if the audience is supposed to intuit some influence here that changed Harleen to Harley even before her dip into a vat of chemicals.

Additionally, the writers have Harley note that she learns from the Joker how to be "someone who could be anything they wanted. The sex kitten, the seductress, the innocent, the aggressor, the antagonist, the victim, the ditz." This is surely held up in Power Outage, as Harley is manipulating Power Girl one minute and being the comic relief the next. Secret Origins is a venue more amenable to seriousness than the Harley Quinn comic, toeing the line as the origin does between the Harley Quinn Harley and the Suicide Squad Harley, but way at the end of this Harley Quinn run, I wonder if the authors might acknowledge that Harley has been in control all along, and every zany moment was calculated just for the right effect.
Posted by John "Zanziber" Rogers at 6:00 AM
Email ThisBlogThis!Share to TwitterShare to FacebookShare to Pinterest
Labels: Reviews