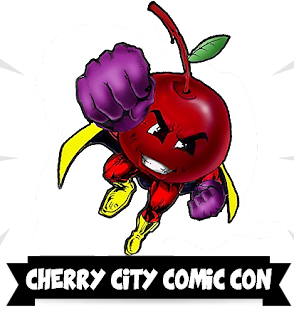 Who has 2 thumbs and will be attending this years Cherry City Comic Con as a member of the media?
April 8-9, 2017 at the Oregon State Fairgrounds. You must join us! Not only will there be Comic Book Covers 4 Cancer contributing artists Robert "Floydman" Sumner, Keith Tucker and Gary Martin, but our biggest sponsor Tony's Kingdom of Comics will also be there!
Posted by John "Zanziber" Rogers at 3:57 PM 1 comment:
Email ThisBlogThis!Share to TwitterShare to FacebookShare to Pinterest
Labels: Cherry City Comic Con 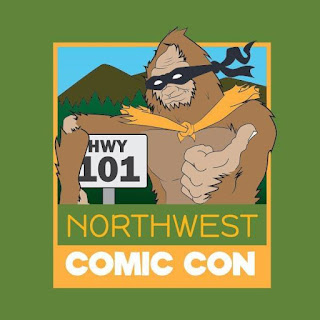 Over the past several years, I've been privileged to be able to cover several local comic events. When I heard there was going to be another event starting in 2017, I was eager to visit. Thankfully, I was provided the opportunity to come and partake of the 1st annual event known as Northwest Comic Con.

I had never been to the Tillamook fairgrounds before, so I didn't know what to expect. I have been to the Oregon State fairgrounds on several occasions for a variety of events, so I figured it would probably be a bit scaled-down from the buildings I was familiar with. My imagination was not too far from the truth.

I wasn't sure what to make of it when I first arrived, but when I entered the main building, I could tell that I have arrived and that this was going to be fun.

To give a different perspective on what this more intimate venue means, I have a review from my friend and photographer Rita Upton:

I am a reluctant con goer. I will be up front about that, but the Northwest Comic Con is my favorite by far. Why? It isn’t over reaching! There are not 20 actors roaming around that have very little connection if any to comics, superheroes, or iconic movies. There is not floor upon floor of artists trying to stand out. It is small and honest. It is a budding project that provides an interesting snippet into a con experience for a family of geeks without getting lost in the fandom.

I enjoyed meeting artists and people watching, but I also enjoyed something I have never seen before at a con... Customer service. When areas got crowed and people needed a place to site reps brought out tables and chairs. Rest breaks are under achieved at larger cons. You can spend a whole day trekking from the Avengers to Zootopia with nothing but the floor as a rest stop. After a full con you will be too tired to even notice Zootopia shouldn’t be a part of the con experience.

I loved the benefits that were represented at this con, everyone from The 501st Legion to Outer Rim Collective, and that is so often over looked. The overwhelming appeal of comics and the like are the hero and heroines of the story. They bring the fight and that’s what these groups are doing here. They are bringing the fight and working for a cause under the comic con banner. I salute you.


The first item on my agenda was to make sure I visited the attending Comic Book Covers 4 Cancer contributing artists, Robert "Floydman" Sumner, Neil Jorge, Keith Tucker and Corveaux Millions. I missed visiting Corveaux, but I was able to touch-base with everyone else. 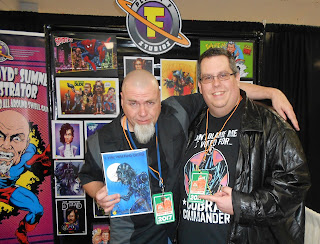 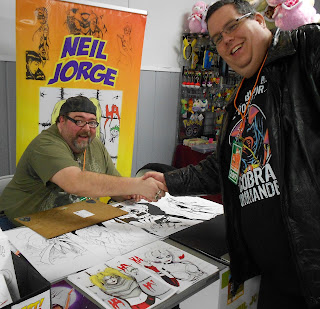 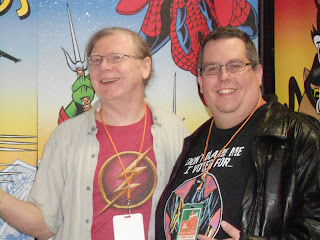 The energy of this event was palpable and wonderful. I didn't see or feel any negativity during the event. I'll admit that when I have to wait in line for a long time for a signing or to make a purchase, it irritates me. The flow of this event allowed for everyone to get around easily and even though there felt like a good turnout, it never felt crowded.

My loyal readers will know that if I am left to my own devices, I don't typically take many (if any) photographs. I'm fortunate enough to have a great friend who also happens to be a photographer. All photographs are courtesy of Rita Upton from {Chrysalis Rising Photographic Studio}.

To that end, I wanted to present a couple of photo's that she caught while we visited the Temperate Sage booth. 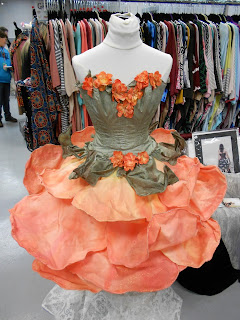 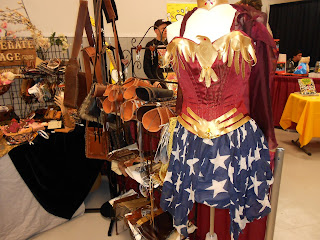 I don't typically take notice of the fashion or costuming items at comic cons, but this Wonder Woman piece caught my attention. Very beautiful work.

Being a member of the non-profit/charity world, I have a very healthy respect for events that make sure they have at least a few vendors that are there to help support some charities. As mentioned earlier, there were several in attendance for this weekend. I would highly recommend anyone who wants to run events of this nature to take notice and follow suit. 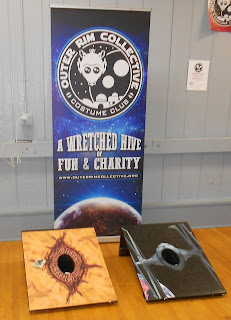 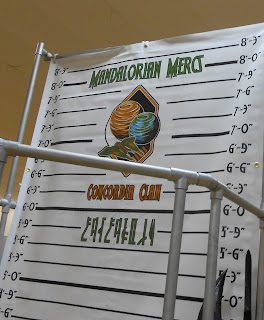 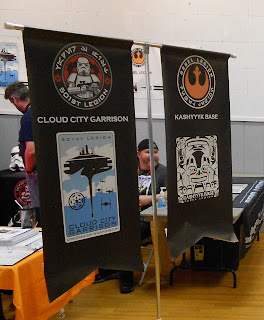 One of the huge misses that other events have had is the lack of good and affordable food. Being on the Oregon coast, you would figure that there would be some kind of seafood offered... and there was! Sea Baron Fish & Chips were in attendance, and the smell of deep-fried fish drew me in, and I was not disappointed. For the $10 I paid, I not only had lunch, but something to eat the following morning. At most events I've attended, for that same $10 you would probably get a hot dog and some chips.

And what comic con would be complete without some cosplayers? We were able to get a few photos of some great costumes. 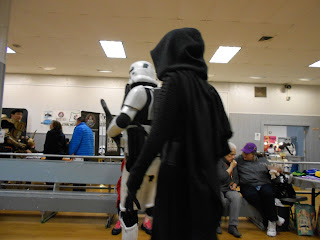 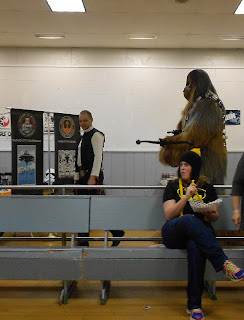 For me, the biggest highlight of this event was finally getting to meet author Timothy Zahn.

I have been a huge fan of Zahn's for many years. He caught my attention with what is commonly know as the Thrawn trilogy, a that's exactly what I brought to have him sign.

While waiting for him to be free, I overheard the conversation he was having with the fan ahead of me about the (what is now know as) the Legends for Star Wars. I had read several articles of what was happening when Disney took control of Star Wars, but listening to Zahn explain it made everything more clear to me, and hopeful for the future. There is hope that some of our Expanded Universe favorites could possibly some into the Star Wars universe as canon.

Northwest Comic Con was a well put-together event, and I look forward to next year. I hope that now that the 1st year is in the history books, artists and vendors will be more interested in coming to this event. 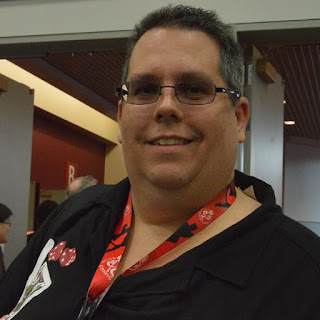 I wanted to post an update about what's going on with myself since I haven't been exactly on-top of my writing duties to any of my blogs.

I'm hitting the wall on several occasions when trying to write my reviews. I have a small stack of trades that I have read but have not yet reviewed, and I am slowly working my way through the large stack of trades that I need/intend to read for review. It seems like, more often than not, when I go to write a review about a trade I draw a blank on how I feel about it. Some call this "writer's block". I occasionally call it a lack of motivation.

I took a long break last year to try and get my head cleared to write, and I've been able to do so... sporadically.

I know that I've been trying to concentrate on so many other things in my life, and that is why I feel this way. I have my job, collecting comics, collecting Funko Pops, role playing games, and my all-consuming passion is my non-profit, Comic Book Covers 4 Cancer.

This past week, I watch a video my friend Ben Kreger did about his comic, "Black Suit of Death". Several of the things he said helped to inspire me to write.

As I believe I've pointed-out in the past, there was a time where I was actively trying to write a few different comics. It seems like every time I would work on one of the titles I had in mind, something would just fall-out and I would feel that the concept was lost... so I would shelve it.

This morning... as I am now on day 3 of my staycation from work... I awoke around 1am with a brilliant thought on how to incorporate the different titles I've been working on over the past 20+ years into something new. This has given me the inspiration to write again. Instead of 3 different and separate titles to try and write, I'm focusing on a singular title. Instead of a multi-issue comic series, I want to do a graphic novel format.

While I'm still working through getting reviews written and posted, I will also be attending a few cons this year (Northwest Comic Con March 18-19, Rose City Comic Con September 9-11& EUCON November 11-12). Look forward to my experiences from each of these, and possibly others, throughout the year.

Thank you for staying with me on this. I hope to make it worth your time.
Posted by John "Zanziber" Rogers at 5:30 AM No comments:
Email ThisBlogThis!Share to TwitterShare to FacebookShare to Pinterest
Labels: #CBC4C, Eugene Comic Con (EUCON), Funko Pop, Northwest Comic Con, Rose City Comic Con 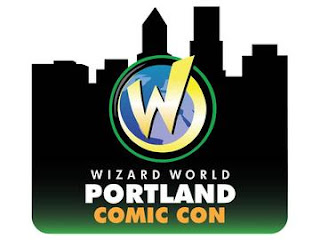 This year, I was able to attend Wizard World Portland. I had not planned on it since there weren't many attractions/guests posted to their website that drew my interest, but when Alan Tudyk was announced as attending, I felt the desire to make an effort to go.

Before many of the cons I have gone to over the past almost 4 years since creating Comic Book Covers 4 Cancer, I have always tried to have a goal in mind for getting something for #CBC4C. Last year for WW PDX, I was able to get some signed prints and a cover from Arthur Suydam. This time, I came in with no agenda other than to acquire Alan Tudyk's autograph on my Hoburn Washburne Funko Pop.

Instead of my usual way of describing my experiences, I'm simply going to post the Pro's and Con's I saw for the event:

Con's:
This years event was less than what it has been in years past, and I wouldn't be at all surprised is next year Wizard World decided to take a pass on coming back to Portland. I think that the negative publicity that WW faced in 2016 (link to story) (link to story) may have impacted vendors and artists alike. If I had to give the 2017 event a rating from 1 to 10, I'd give it about a 6.5. It failed to impress like before, but I got stuff and had some fun while I was there.