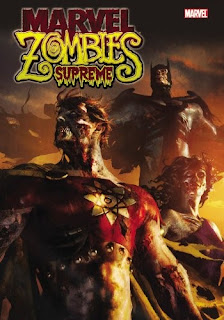 The Squadron Supreme, don’t worry if you’ve never heard of them, a lot of people have never heard of them. As far as I know they haven’t played much of a part in the Marvel Universe. Technically, they don’t play much of role in Marvel Zombies Supreme either considering these are clones of the superheroes. All you need to know is they’re an alternate universe version of the Avengers (because Marvel just loves their alternate universes) that spent a little bit of time in the Marvel Universe proper (Earth-616) before going back to their universe, taking over the United States of America for what they believed were good reasons, and then having to be deposed for becoming the tyrants they once fought against. They were essentially Marvel’s version of DC’s Justice League, with the heroes of the Squadron Supreme being based on heroes in the Justice League. Super strong flyer Hyperion is Superman, superfast runner Whizzer is the Flash, gadget loving Nighthawk is Batman, and Doctor Spectrum, who can create constructs out of light, is based on Wonder Woman, or maybe Green Lantern, yeah, probably Green Lantern. That kind of means that when you’re reading through this edition to the Marvel Zombies storyline you’re reading about a zombified Justice League, and let’s face it, each of us has wanted to see Superman brought down a peg at one time or another. Previously all we’ve had is him crying while he snaps General Zod’s neck in Man of Steel, kind of funny but not quite enough. Seeing him experience the never ending hunger of being a zombie though? Perfect.

This installment of the Marvel Zombie line brings us back to the universe we all know and love, the universe we’re used to otherwise known as Earth-616 (I know, it gets hard to follow sometimes). The P.E.G.A.S.U.S. Research Facility, or the Potential Energy Group and Alternate Sources for the United States, has gone quiet after someone hit a panic button and put the facility on lockdown. Because of this, Guardsman Alpha Team has been sent in with a little bit of back up in the form of Battlestar.

They are able to break inside with help from tech savvy team member Mainframe and head inside to find the place seemingly abandoned, but further exploration uncovers a small group of scientists hiding inside a locked off room. It doesn’t take long for the rescue team to discover why this small group is all that’s left, a zombified Squadron Supreme has taken over the facility, not the actual Squadron, but a version cloned from cells collected during their brief stay in our dimension. Now they hunger for the flesh of the living, and they’ll do anything to keep the meals coming. When they break into the small room the scientists are holed up in, they make quick work of the quivering researchers and turn their attention toward Guardsman Alpha Team and the teams’ superhero guardian.

Battlestar is able to get a few of the team out before the zombified Squadron make quick work of them but many are unfortunately slaughtered before he’s able to act. Things are even worse than they seem as not only is Squadron member Nuke able to escape the facility using the facility’s nuclear tunnels, but Hyperion is able to use stolen blueprints to find a way out as well. Everything seems lost but there’s still a chance in the form of a supposedly dead Avenger that was made of pure energy, the hero Jack of Hearts.

It’s been a little bit since I delved into the world of the Marvel Zombies, not that I was sick of them or anything, I love Marvel Zombies, just got sidetracked. Reading Marvel Zombies Supreme I’m reminded why I enjoy the series so much. It’s not the best to come out of the storyline, but it’s enjoyable none the less. I thought it was smart on Marvel’s part to come up with an entirely new story instead of keeping with the original zombies or their world. This one takes place entirely in the normal 616 universe, and the zombies here have nothing to do with the original Marvel Zombies. The Squadron Supreme zombies were created on Earth-616 from cloned cells in an experiment that went wrong.

I don’t want to give away everything but I’ll just say that Jack of Hearts reanimation has something to do with it. It gave a refreshing air to the Marvel Zombies by having something that had nothing to do with the original Marvel Zombie world take center stage, and it was a good move on Marvel’s part to take the series in a new direction.

I think the biggest problem was in using the Squadron Supreme as the comic’s villains. The story isn’t bad at all, as I stated, I loved that they took the series in a whole new direction and didn’t stick to the original Marvel Zombies. I enjoyed what they did by having the P.E.G.A.S.U.S. facility over run with zombies and a mostly human team having to get the situation under control rather than a group of superheroes. It was just that the Squadron has always seemed kind of boring on their own. Seeing them try to enforce their will in their own universe was interesting for their miniseries run as it was the story of a group of superheroes enforcing their will for what they believe to be altruistic reasons and ultimately subcoming to the power they’ve taken, but for the most part they’re just DC character knockoffs that I’ve never been able to get into. Seeing them as zombies did add a little extra to them, but they still felt like DC knockoffs, just undead ones.

I liked that they didn’t use mainstream Marvel characters as zombies since that’s what we’ve had for a while now, but there are a lot of other heroes and villains they could have chosen to showcase as the undead, even minor ones that have never had much of a part would have worked better than the Squadron Supreme. Battlestar was a good edition though. He’s not as well-known as many other heroes, but being Captian America’s protégé he’s the perfect person to step into a role that Cap would have worked great in himself. Plus, with our team trying to contain the zombies being comprised of regular humans (and one robot) it made sense to have someone who wasn’t a superpower himself.

It would have cheapened the team to have someone that didn’t really need them there which is why I’m not sure the addition of Jack of Hearts worked out so well. I’ve always loved Jack and his attempts to prove he can be the hero everyone expects him to be, but he’s such a powerhouse that once he came into play I had to ask myself “Why is anyone else even wasting their time when Jack can just blast the zombies away.”

I’d prefer to see what a team of normal people could do to handle the situation. They were able to balance it a bit by having Jack be a mess when he’s first woken and needing the Guardsman team leader to bring him back to sanity, but once he’s up and running no one else is needed. How he plays into the creation of the Squadron zombies was interesting, just would have preferred seeing the regular team handle the zombies themselves.

The artwork isn’t bad in the slightest, in fact it’s very good, it’s just kind of bland for what I’ve gotten used to with Marvel Zombies. It’s much more in line with artwork from many other Marvel titles instead of being something unique like most of the other Marvel Zombie stories. Most of the other ones have taken their artwork to a different level so that it stood out from everything else while this seemed to fall in line. That being said, it’s not in the slightest bad work and showcases some of the talent Marvel has in their artists, it simply doesn’t stand out.

Where they definitely succeeded was in making sure the art was at least more adult themed. There’s no holding back as the blood and guts fly. Heads explode, people are ripped apart, and blood flows freely. I would think that this may be the end of the Marvel Zombies titles. We'll see.
Posted by John "Zanziber" Rogers at 6:56 AM
Email ThisBlogThis!Share to TwitterShare to FacebookShare to Pinterest
Labels: Reviews