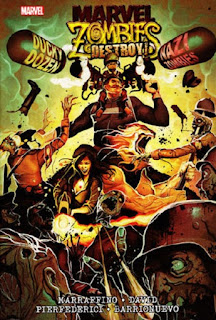 My initial reaction to this book was to make a joke about the fact that they have now made so many Marvel Zombies comics that they decided to quit numbering them, but looking at that Wikipedia page, I see this is hardly the first Marvel Zombies-branded book to be published sans a number (That would be their third outing, Dead Days, and Destroy! was also preceded by the non-numbered Return, Evil Evolution and Supreme).

This five-issue, 2012 miniseries seems to follow Marvel Zombies 5 rather closely in that it features Howard The Duck fighting zombies in an alternate dimension, but it is not the work of Marvel Zombies 3-5 scribe Fred Van Lente; rather this miniseries rather unusually has two different writers, with a Frank Marraffino (Marvel Zombies Supreme) writing the first two issues, and veteran writer Peter David taking over for the final three issues. The unusual change seems to suggest a problem of some kind, or at least a story behind it, but perhaps it was a schedule thing as much as anything else; there's a little editorial in the back by editor Jake Thomas that mentions the difficulties the team went through in getting it out, and how the project was a dream come true for him, and how heavily involved he was.

The art team is more stable, but it still required a fill-in artist, which is, again, pretty unusual in a miniseries, and the fill-in falls on issue #3, which is right where the writers change. A Mirco Pierfederici draws all of the issues save for #3, which is penciled by Al Barrionuevo and inked by Rick Magyar. It's worth noting that the change isn't terribly disruptive; I wouldn't have noticed a change in either writer or artist while reading if I hadn't read the credits page first.

I think that says less about the styles and skills of the creators than the fact that they were working on a franchise with such specific sensibilities. Does it have zombies in it? Are there a lot of jokes, a dark sense of humor and a great deal of horror? Okay, fine, it's Marvel Zombies then. Like a few other offerings to date, this one doesn't really feature the "real" Marvel Zombies, the ones from that alternate dimension first introduced by Mark Millar which was basically just the Marvel Universe if all the superheroes had turned into zombies, but it does feature plenty of zombified Marvel superheroes (from another alternate dimension full of zombies), and cast is split between Golden Age characters and the most obscure Marvels this side of Woodgod. Howard the Duck gets top bill (Ha! Bill!), and Dum Dum Dugan is the next biggest star, if that tells you anything about the cast.

Howard, Agent of ARMOR, recruits Dum Dum, Agent of SHIELD, to be a part of his crack strike force nicknamed "Ducky's Dozen." It appears that ARMOR, the acronym for government agency Alternate Reality Monitoring and Operationl Response, has discovered a reality where the Nazis won World War II (like DC's pre-Crisis Earth-X, then), and they accomplished this by becoming zombies. Worse yet, the Nazi zombies are preparing to invade the Marvel Universe, unless Howard's team can journey there first and wreck their mode of conveyance. Dugan has been recruited specifically for his Nazi-fighting expertise, but he suspects there's some other reason Howard wants him along and isn't telling him...and he's right!

As for The Dozen, they're a huge group of totally awesome-weirdos, only a few of whom I had ever even heard of, or could tell you much of anything about: Battlestar, Blazing Skull, Breeze Barton, Red Raven, Dragoon, Dynaman, Eternal Brain, Flexo, Gur and Taxi Taylor. How many of these guys are super-old, super-obscure characters, and how many were invented specifically to be killed off in this series? There's only one way to find out, and it's a good 15 minutes of Wikipedia-ing fun!
Spoiler alert: 3/4th of them don't make it back home, but somehow I doubt some of these deaths will stick, given the tongue-in-cheek nature of the entire series.

The dozen heroes journey into Nazi zombie-controlled territory and attempt to fight their way up a Mount Rushmore-style Nazi base with the heads of Hate-Monger, Zola, Red Skull and Baron Von Stucker, and they immediately find unexpected heavy resistance in the form of the zombified, Nazi-fied Invaders. And then they get some unexpected assistance from some lady superheroes going by the name "The Sufragists," and lead by Miss America, who has picked up this world's fallen Captain America's shield and legacy.

As the story progresses, new unlikely allies and unlikely enemies join the fray, with Loki siding with Earth-616's good guys and a zombified Thor and the rest of a zombified Asgard siding with the Nazis whose ancestors used to worship them.

There's a nicely strange aura about the entire book, owing in large part to its big, odd-ball cast, almost all of whom are completely disposable on account of their being either created specifically for this book, so rarely seen it's hard to imagine they would be missed (I had no idea Red Raven was even still alive to be killed!) or alternate reality characters, in which case anything goes, as we've got our own perfectly good Thor or Zola or whoever back in the "real" Marvel Universe.

Some gags work a lot better than others. I thought the riffs on Namor's catch-phrase didn't really work, as they were coming from Namor—well, a Namor—himself, but I did sort of love the armband worn by Dum Dum's alternate dimension, Nazi zombie doppelganger:
Yes, that's a handlebar mustache where the swastika should be and, yes, they did think to rename him Dead Dead Dugan, which is the title of this particular issue's story.

Marvel Zombies Destroy! certainly has its moments and, I think, more moments than many of the other Marvel Zombies efforts. It appears that there's still some life in this franchise after all.
Posted by John "Zanziber" Rogers at 6:00 AM
Email ThisBlogThis!Share to TwitterShare to FacebookShare to Pinterest
Labels: Reviews