At the end of February or the beginning of March 2016, I learned that PGX was offering a special Stan Lee signing and grading. Since I don't get the chance to actually go to events where Stan Lee is scheduled to be, and I hate standing in lines for as long as those lines usually take, I thought I would jump at this opportunity... especially since the news broke that he was not going to be doing events for much longer.

So I picked my comic book to have signed by Stan, which happens to be the comic that brought me into reading and collecting in the first place: G.I. Joe: A Real American Hero #50. 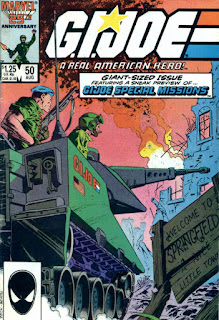 I know that Stan Lee didn't really have anything to do with the writing, art or editing of this issue or series, but it was Marvel and at that time of course carried his name on the title page. As my loyal readers already know, it was last year at Rose City Comic Con that I had this same issue signed by writer Larry Hama.

With the deadline approaching, I made sure I had my paperwork completed correctly so that they would also certify my Larry Hama signature, and sent it off to make the deadline.

At this point, please allow me to explain something clearly so that you understand the rest of this post. PGX has a FIRM deadline posted to get your submissions for the Stan Lee signing. The definition of the word DEADLINE is the latest time or date by which something should be completed. This would suggest that there was already a scheduled date that PGX had lined-up for their signing event.

On March 25, I emailed PGX to see when the signing was going to take place so that I would have a reasonable expectation when I should receive my precious copy of G.I. Joe #50. In April I tried contacting them through their website and was informed that there had not yet been a firm date scheduled for the signing. Later, I was informed that it wouldn't be until September that they would actually be able to have Stan Lee sign. I figured that since PGX is located in Oregon, they would be taking advantage of his visit to Rose City Comic Con. I decided to wait.

After RCCC had passed, I emailed again asking when I could expect my book back. I emailed again on October 28 and November 18, each time asking for some response via email so I would have something documented. In the November 18th email, I even asked if I would be receiving a discount considering they've had my book since March. (Keep that statement in mind for later.) I received 2 phone calls during this time from one of their representatives; I believe his name was "Daniel" even though the person I have been emailing was "Aaron Sasson". "Daniel" explained that there have been several attempts to get the signing done, but that "the people around him want too much money" and that created a problem for them to be able to get anything signed. In the first conversation I had with "Daniel", he expressed that they were going to make a few attempts in October. In the call I received in November, he explained that they had a chance at another event, with about a 95% certainty that they would be able to get the signing because their witness was a "close, personal friend of Stan". He also said that I would be receiving a reduced fee because of all the problems. I decided to let this ride for one last time, but told him that if they failed to have it signed that I wanted my book back.

On December 8, I emailed again asking when I should expect to receive my book. On the 9th, I received a reply stating "We will be shipping your Stan Lee signed book out today or tomorrow. My apologies for the delay."

Later that day, I received a voicemail from PGX stating that there was a problem when they attempted to charge my credit card. I connected with my bank and made sure the charge would go through and let them know. As I am writing this part of my post, it is December 11, 2016 and they have not yet charged my credit card nor have they provided me with the shipping details.

When I completed the paperwork for this back in March, the total was going to run $171.50. When I received the email stating how much they were going to charge me, I was informed $161.50. With all the hassles I have been through over the better part of a year, they feel that my inconvenience is only worth $10?!?

The biggest reason I have used PGX in the past is because they had a more reliable turnaround time, were less expensive than CGC, and I kind of wanted to support a local company. When I used their services between 2004 - 2006, I was only let down because people weren't wanting to readily accept a PGX grading.

After my experiences with CBCS last year, I will make sure that I NEVER use PGX again, and I highly recommend that you never even consider using them either.

On December 13th, I received an email from PGX with the shipping information. It stated that they shipped via USPS Priority. Since they're just about 70 miles away from me, USPS should be able to deliver in 1 day.

December 15 - 18: Same as December 14th. No response from PGX when I asked them for information and scans.

December 19: I received an email stating that the shipping serrvice had changed and provided a new tracking # via FedEx.

December 20: I finally received my book back! Huge F-ing box! Way more than it needed to be. Last year, when I received comics back from CBCS, the box was the same size... but it also contained 10 graded comic books. 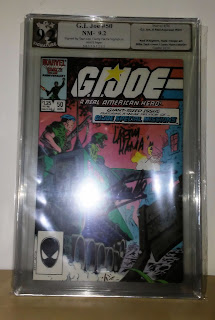 9.2 and "authenticated" with both Larry Hama and Stan Lee's autograph! The fact that I have had this specific issue for 30 years and it's in 9.2 condition... I feel pretty good about that part.

The takeaway from all this? Don't use PGX and if you want to get someones autograph, go get it yourself!
Posted by John "Zanziber" Rogers at 2:58 PM
Email ThisBlogThis!Share to TwitterShare to FacebookShare to Pinterest
Labels: Comic Book Grading, Opinion, PGX Comics