Guardians of the Galaxy/All-New X-Men: The Trial of Jean Grey

Title: Guardians of the Galaxy/All-New X-Men: The Trial of Jean Grey 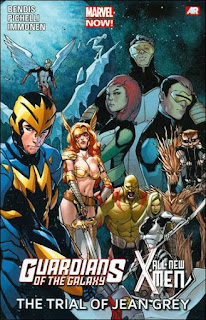 The story begins in the pages of All-New X-Men #22. There, X-23 and Kitty Pryde are helping younger versions of the original X-Men (Cyclops, Jean Grey, Beast, Iceman, and Angel)—who had previously been brought through time to the present day to show the current Cyclops and his X-Men the error of their villainous ways—to cope with their time displacement. Both young Cyclops and Jean had previously been shown their futures, including Jean's deaths as the host of the world-destroying Phoenix Force and Cyclops' spiral into depression and rage over her death.

This obviously throws a monkey wrench into the teenage lovers' relationship, but before they can cope with it, a covert Shi'ar strike force attacks the X-Men and whisks Jean away. The Guardians show up soon after the kidnapping, in response to the alien force messing with Earth affairs.

Guardians of the Galaxy #11.NOW constitutes part two of "The Trial of Jean Grey," as the story jumps from one title to the next in true Marvel crossover fashion. Picking up after the events of the second trade, the issue reiterates the Guardians' rocky relationship with the Spartax Empire before diving into another meeting of the council of galactic empires (no relation to the Galactic Council). Gladiator, leader of the Shi'ar Empire announces his intentions to capture young Jean and bring her to trial for her future crimes against the universe as the Phoenix. The different rulers' mixed feelings sets a moralistic tone for the rest of the story arc, asking the question: "Is it right to punish someone for something they haven't done yet?"

The issue also marks the departure of Tony Stark (aka Iron Man) from the story line, as he sends the Guardians a message from Earth thanking them for allowing him to be a part of the team. Thus, Brian Michael Bendis ties up what could have been a confusing loose end.

The Guardians are alarmed and move to action when an alien ship enters Earth's atmosphere, and from there their story ties into the X-Men's. They team up to track down Jean and her kidnappers, during which they meet up with the Starjammers—a group of space pirates led by Cyclops' long lost father. You can imagine the interaction between young Cylcops and his father, who had already reconnected with his son years before.

While the three teams are on their quest, Jean is made ready for her tribunal, but the tribunal is interrupted by King J'son of Spartax when he tries to reason with Gladiator about the trial's absurdity. The X-Men, Guardians, and Starjammers eventually make it to the Shi'ar throne world where Jean is being held, and a huge battle erupts between the heroes and the Shi'ar Royal Guards. Young Jean discovers and uses a new power—one never exhibited by the deceased Jean—to bring the battle to a stalemate. She ends up leaving with her friends after Cyclops threatens to bring the Earth's entire population of superpowered beings down on Gladiator and the Shi'ar if they ever come to Earth again. The teams part ways at the end of the story arc, with Cyclops joining his father and the Starjammers, and Kitty hooking up with Peter Quill for a long-distance relationship.

The biggest hurdle this story presented for me was making me care about an X-Men story. I'm not a huge X-Men fan; I've never read a single X-Men title, and I've never cared about any of the characters. I know the gist of the Dark Phoenix Saga, however—you kind of pick up on these things as a comic book geek—and I've watched every X-Men film Fox has produced, so I'm not completely unaware of these characters. Once again, though, Bendis successfully pulled me into a property I had very little interest in, albeit temporarily and for this story arc only.

I'll admit that I enjoyed this largely X-Men-centric story despite my reservations. Bendis continues to shine when it comes to characterization, even with a cast of twenty or more characters. (This story had a lot of unique characters.) Every major participant—including all of the X-Men, most of the Guardians (except Drax, really), one or two of the Starjammers, and one or two of the Shi'ar Royal Guards—had their moments in the spotlight.

As strong as Jean and Cyclops' in-your-face young romance was, it was Angela and Gamora's developing, quasi-romantic warrior's relationship that really took the cake for me. (Sorry, Peter and Kitty.) Drax suffered the most in this crossover, in my opinion, as his development took a back seat to that of the characters at the center of the story. He may have had one moment with X-23, but it wasn't enough for me to regard him as an integral member of the Guardians.

Stuart Immomen and company supply the art for All-New X-Men, which seamlessly complements Sarah Pichelli and company's Guardians of the Galaxy art. This gives the entire story a coherent, overarching visual style that doesn't impede the constant back-and-forth of switching from one title to the other. With the addition of Bendis' writing both titles and grandmastering the whole crossover, "The Trial of Jean Grey" makes for a fluent, stunning, and enjoyable read.
Posted by John "Zanziber" Rogers at 6:00 AM
Email ThisBlogThis!Share to TwitterShare to FacebookShare to Pinterest
Labels: Reviews