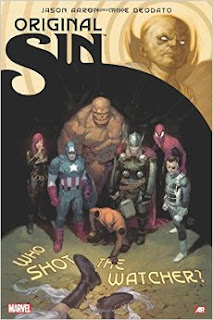 For millennia the Earth has been observed by Uatu the Watcher, an immensely powerful cosmic entity, it is his duty to record what passes on our planet, never to intervene. But what happens when the innermost secrets of mankind are revealed?

Original Sin was Marvel’s big event of the earlier part of 2014 which has now been collected by the fine folks of Panini along with the supporting Original Sins mini-series. As an event about the nature of secrets and their impact upon the unsuspecting denizens of the Marvel Universe it’s rather difficult to review without letting any secrets out along the way.

The heart of the story is a whodunnit coupled with a series of character revelations driven by the plot which spanned out beyond the core event titles into the wider MU. This really weakens the collected event as none of the wider reveals happen within the book and they’re hardly referenced in the story. This gives the impression of Original Sin being the most unnecessary type of comics event, needlessly retconning swathes of Marvel Universe history to little actual effect other than to create room for aspects of the cinematic universe to be adopted.

A quick look at wikipedia shows that as well as the nine issues of Original Sin there were a couple of interstitial series Original Sins 3.1-3.4 and 5.1-5.5. I’m all for taking unnecessary elements out of event books to keep the number of issues manageable but only where it doesn’t detract from the story, in this instance it’s the latter. There’s no heft to the story because there’s no emotional impact on the page.

I find it hard to argue with that point of view as I was completely underwhelmed by what I read. The idea of parallel histories being revealed via retcon is fairly well established in comics, although I can’t recall it being used in such a high-profile title it was a central part of Marvel stories as recently as Secret Warriors. Whereas in that title the reveal was stunning, so much so that it was healthily robbed for the Captain America: Winter Soldier plot, after reading what a key Marvel character has allegedly been perpetrating for decades I was just left thinking “what?!”.

What was worse is that as revelations go it wasn’t hugely revelatory. Veering dangerously close to spoiler territory I will just say that if Marvel want to scrap the original versions of their characters in favor of the movie versions I wish they would just do it and not keep fiddling around. The inclusion of characters from Grant Morrison’s Marvel Boy series felt like Jason Aaron trying to tap into the reflected glory of their creator.

Events are often judged on the basis of whether they stand the test of time. I would be amazed if the retcons made by this series aren’t ignored or undone over the next couple of years..
Posted by John "Zanziber" Rogers at 6:00 AM
Email ThisBlogThis!Share to TwitterShare to FacebookShare to Pinterest
Labels: Reviews