The Wicked + The Divine Vol. 2: Fandemonium 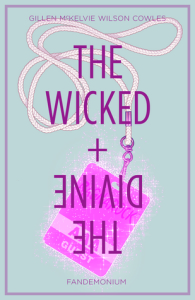 The Short Version: In the wake of Lucifer’s death, the gods continue on but Laura is trying to find out what happened. Who were the attempted assassins, what part does Ananke play in all of this, and is she actually special too? But as the gods launch their big festival – called Ragnarock – the stage is set for revelations nobody is expecting.

(FYI there are gonna be some light SPOILERS, by necessity.)

Talk about leaving people screaming for more. You thought Lucifer’s death at the end of The Faust Act was something? Wait for the one-two punch of a twist that comes out of this issue. I can’t even really wrap my head around it: it both explodes our conception of this world/mythology while also exploding the actual more literal story. It’s not unheard of to kill off main characters, but I’ve never seen anything as ballsy as this. Killing Ned Stark ain’t got shit on this move. Kieron Gillen is one crazy-bold dude, that’s for damn sure.

But as drop-dead crazy-amazing as the last pages are, the whole volume is pretty much amazing as well. Laura is grappling with a level of unexpected fame (having been there when Lucifer died) while also trying to reckon with her grief – and it provides a nice balance of external and internal stuff, big and small grappling for the same amount of mental real estate. On the one hand, she’s trying to figure out why somebody would want to kill the gods – and on the other hand, she’s dealing with the loss of a friend. All the while trying to figure out who she is. It’s tricky storytelling but Gillen pulls it off, largely with the help of Jamie McKelvie’s beautiful artwork. Even as the literal gods are running around, we retain a sense of small-scale humanity. It’s lovely.

We get to meet more of the gods this time around, too: Dionysus is a raver, Innara is Prince, and the fates of Norse mythology (Urðr and the Norns) are a crazy female spooky goth rock trio or something equally cool. They reminded me a bit of Elvira, but as lensed through some of Jack White’s Third Man Records girl groups. And the Pantheon is now complete: which means… what, exactly? Ananke has plans, it’s clear: she tells certain people certain things while withholding certain other pieces of information. It’s clear that she feels threatened by certain figures in the Pantheon and that other figures feel threatened by her… but beyond the vague and shadowy backstory about the Recurrence and what it does, essentially we’re still clueless. There’s something, potentially, to this idea that the gods protect humanity from some sort of encroaching darkness – a story/myth that’s not unfamiliar to anyone who has studied mythology from any country or canon – but what that darkness is, is unclear. The part Ananke plays is supposedly to guide the gods during their time back on Earth to make sure the darkness can’t ever win again (“We could have had men on Mars thousands of years before the rise of Rome but for the Great Dark,” she says at one point)… but I get the sense that she’s playing some other game here, too. Gone a little crazy, perhaps, having become essentially immortal… Or is it that the bug she puts in Baphomet’s ear actually related to her as well?

It’s unclear and I have to imagine it’s going to remain that way for a little while longer… but oh boy do I want to know what comes next.

But, again, the things we have here are deeply satisfying. Ragnarock, the Con/big concert for the fans of the Pantheon, is an inspired invention. It’s one part Comic Con, one part Glastonbury – and you really do feel the size of the thing. A floor map, annotated by Laura, helps anybody who has never been to a convention before feel the size of the thing while those who have will grin knowingly.  BEA is no Comic Con but I can’t imagine going to anything crazier than the former, so this is a nice chance to pretend.  Plus, music lovers will enjoy the idea of the festival as well as its attendant smaller shows – like Innara’s super-sexy residency in what would appear to be a church, which is exactly the kind of delightful profanity that old-school Prince might’ve enjoyed.

The skillful shorthand deployed by the whole team behind this comic should be shouted once more, by the way. We know each of these gods and their attendant attitudes, beliefs, and behaviors even when they don’t have too much in the way of screentime – and part of that is because they (the creators) know exactly how to use visual signposting and cultural touchstones (making the gods look like stars that we all know already), but it’s also because they are an incredibly skilled team, economically. Look at the sequence in (I believe) Issue 8, at Dionysus’ rave: the pages are split into 8 equal panels but four of them just have the numbers 1/2/3/4. The other four share some piece of storytelling. This ought to be constrictive but, for some reason, it ends up being propulsive: the story is told with sharp economy and you get everything you need in nearly the barest amount of space. Judging from some of the “apocrypha” in the back of the collection, that took a whoooooole lot of work… but, just saying, you can see it on the page: this comic soars.

Rating: 5 out of 5. Again, they really know how to close out an arc on a bang, pun sorrilly intended. But the expansion of the world of the Pantheon has me absolutely delighted and the concept behind the comic continues to be riveting, even as you realize how simple and silly it could be in less-talented hands. I can’t think of another comic that made me need to read the next issue so badly – or one that has felt so much like exactly what I wanted to find, even though I had no idea I was looking for it. Thank god we don’t have to wait 90 years for more.
Posted by John "Zanziber" Rogers at 6:00 AM
Email ThisBlogThis!Share to TwitterShare to FacebookShare to Pinterest
Labels: Reviews