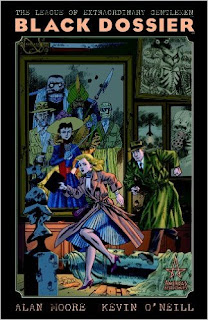 The third instalment of Alan Moore and Kevin O’Neill’s The League of Extraordinary Gentlemen brings us into the 1950s. After winning the Second World War, the British government was usurped by a new party called Ingsoc, bringing a socialist dictator (Orwell’s Big Brother) into power. The remnants of Mina Harker’s League (last seen fighting Verne’s War of the Worlds in volume 2) is no longer under government sponsorship, having been replaced by more traditional and easily controlled governmental agencies. So the government’s file on the League – the Black Dossier – has been closed for some years.

At the time this book takes place, however, Big Brother’s reign has come to an end. The 1950s are in full swing and British life is normalizing. And so two mysterious figures break into a government building, with the unwitting help of a British spy called James Bond, and steal the dossier. Who they are, what they’re up to and what’s contained in the pages of the dossier are all revealed here.

The sections of the book devoted to telling the current story are in the usual comics format, scripted by Moore and illustrated by O’Neill. This is a rip-roaring adventure, as the couple steal the dossier and attempt to evade the authorities. Moore’s script captures the spirit of the time, featuring a sort of acceleration of hope and technology after the dark times of war and dictatorship. O’Neill’s illustration remains as richly detailed and stunningly characteristic as ever.

Less exciting is the dossier itself. This is mercifully interspersed into the flow of the comic – we effectively read it alongside the protagonists’ own reading. But while entertaining in places, it’s bone dry in others.

The problem is that Moore presents his history of Leagues past and present in the styles of the literature they come from. So while these may at times be interesting and succinct – such as business-like entries from Harker’s journal – at other times they’re turgid and frankly dull. One section, in which the protagonists are met and described by a Kerouacian beat character, is written in an unpunctuated, rhythmic style. There’s little doubt that this is stylistically clever, showcasing Moore’s versatility in creating mashed-up facsimiles in other peoples’ work, but it’s arguably at the expense of the reader.

This turns it into the most disappointing of the League books so far. The background material is of interest and the recent history is key to unraveling the mysteries in the main comic. But it’s a chore to work through, occasionally feeling a bit more like homework than entertainment, and that’s a bit of a shame.
Posted by John "Zanziber" Rogers at 6:00 AM
Email ThisBlogThis!Share to TwitterShare to FacebookShare to Pinterest
Labels: Reviews