Title: What If? AVX 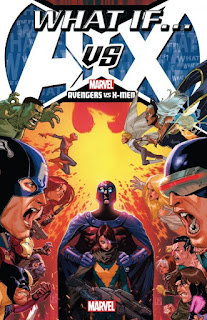 What If has always been up there as one of my favorite comic series of all time. In recent years, mostly because of editorial tinkering, the books have become a pale imitation of what they once were. Eventually, What If only appeared every so often, usually corresponding with an event book. Cue What If Avengers Vs. X-Men, writer Jimmy Palmiotti’s take on what would happen if? Wait, there is no “if.” That’s the whole problem here, a lack of “if.”

Change is not always the enemy, but with What If, it is. First, the whole concept of the series was to take one element or one significant event in the Marvel Universe and change it. For example, What If Uncle Ben Had Not Died? What If Spider-Man Joined The Fantastic Four? What If Rick Jones Had Become The Hulk? Second, The Watcher appeared in the beginning of the story, explained the one thing that might have changed, and the story went from there. That was the set up. It was what defined What If.

With issue #1 of What If Avengers Vs. X-Men, there is no element that changes and no Watcher, it’s just a different story. Granted, this has been going on within What If for awhile, but it is still missed. Outside of those changes, the story here falls flat. Most of the blame can be laid at the feet Palmiott’s dialogue. It’s all exposition. The dialogue narrates the action instead of being part of it. Here’s what’s happening, here’s what we’ll do, here’s how this will go down. About halfway through the book, you realize Palmiotti is writing this like a children’s comic.

Almost as frustrating as the dialogue is the story itself. Palmiotti starts it with the Phoenix killing the Guardians of the Galaxy by blowing up their ship. Really? Why? From there, the story is pretty much exactly the original, until the Avengers get to Utopia. For some reason, Cyclops is totally laid back, sending Magneto to take care of business. Approaching the X-Men, Magneto announces he knows Wolverine is going to kill Hope. This unleashes an argument that allows nobody to act according to their character. Worst of all is Logan, who goes all berserker rage after getting punched ONCE by Namor. In his rage, Wolverine kills Storm, driving Magneto to blow up the Avengers ship.

The most disappointing thing is the lack of flow to the story. Palmiotti does things just to do them. He has characters act a certain way just to move his plot along. Too bad, because there are a lot of cool elements that could be changed here. What If Phoenix Wasn’t Coming For Hope? What If Wolverine Had Killed Hope? What If Cyclops Killed Hope? What If The Avengers Captured The Phoenix? The list is endless. Why Palmiotti’s lackluster story got the green light is beyond me.

Jorge Molina’s art doesn’t help the situation. Quite simply, he draws like he’s storyboarding a cartoon series. The art looks like it’s straight out of the animated Avengers series. Heads are weirdly shaped, expressions are silly or, at the very least, overly melodramatic. Combine that with how similar Molina pencils all the males facially, and you get a recipe for art that looks, for lack of a better term, goofy.

I suggest a new book. What If Avengers Vs. X-Men Was Way Way Better?