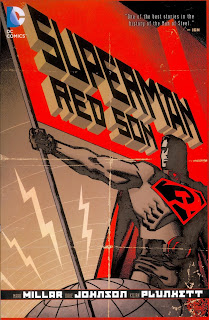 DC’s “Elseworlds” has always given us stories that ask the question “What if” in a truly compelling way that I feel Marvel never has been able to achieve. They allow us to see our heroes from a completely different perspective, not just by changing minor details, but by changing major details of the setting and the origins of the character. And yet, despite all of those changes they still manage to retain the mythos and preserve those characters to remain the heroes (or villains) we know and love (or love to hate.)

Mark Millar’s “Superman: Red Son” is easily one of the best “Elseworlds” ever published, even if it doesn’t officially brandish the “Elseworlds” logo. It asks perhaps the most introspective “what if” question of all:

What if Superman had been raised in Soviet Russia instead of the United States? What if the ideals the Man of Steel fights for is not “truth, justice and the American way,” but rather “Stalin, Socialism and the international expansion of the Warsaw Pact?”

The result is not only an ironic take on an iconic American super-hero, but also a compelling perspective in the history of the Cold War.

The Superman of this universe was raised in a Ukrainian collective farm in Communist Russia. Over the intervening years, Superman becomes a member of Joseph Stalin’s inner circle and is used as a propaganda machine to bolster the Soviet regime. When Stalin passes away, Superman reluctantly assumes political power for a society that is too quick to accept a totalitarian dictatorship. Superman’s Global Soviet Union has eliminated war, poverty, disease, crime, poverty, and unemployment.

If it sounds too good to be true, that’s because it is. The Russian Man of Steel is a living metaphor of the Orwellian “Big Brother” who can see through walls and overhear private conversations across the globe. Superman’s intentions may be good, but good intentions are not always rewarded with good results. His utopia comes at the cost of increased infringement on individual liberties. People are no longer in control of their own destinies. He implements a brain surgery technique that effectively lobotomized dissident citizens and converts them into obedient drones, or “Superman Robots.”

The Superman of “Red Son” also functions as an allegory for the arms race. With Superman championing as on the side of Soviet Russia, nuclear weapons and covert intelligence agencies become obsolete. Russia effectively replaces the United States as the new world super-power. The Cold War escalates to a metahumans armed race, as the United States struggle to establish super-powered figures of their own to counter the potential threat Superman poses.

Lex Luthor is a brilliant S.T.A.R. Labs scientist Hell-bent on destroying Superman; however, because the United States have hired him to find a way to neutralize the Man of Steel (via CIA agent Jimmy Olsen), that makes him an American hero. He creates Bizarro, U.S. government-funded attempt to duplicate Superman. He also creates a vast array of super-powered villains (Metallo, Parasite, even Doomsday) who in this universe are American-made superweapons fighting for the American cause. Luthor even successfully runs for President of the United States, basically turning America into a dictatorship, an active platform to openly attack Superman’s Soviet regime.

Make no mistake, however. Luthor is still a cold-blooded egomaniac, regardless of which universe he resides in. He arranges for Sputnik 2 to fall towards Metropolis, risking the lives of millions of innocent Americans, just to extract traces of Superman’s DNA to create a duplicate. He murders his entire research staff when he discovers that the Bizarro clone is more intelligent than he is. He collaborates with Brainiac to shrink Moscow (though he shrinks Stalingrad instead.)

Of course, those aren’t the only differences in this book. In this universe, no one is invulnerable to change.

Although Lois Lane is still a reporter for the Daily Planet, she is married to Lex Luthor. So even though there may be a mutual attraction between her and Superman upon first meeting each-other, neither of them are able to pursue a romance. Even though she is still as strong and independent as her mainstream counterpart, her loveless marriage to a neglectful and self-obsessed husband makes her a tragic figure, not to mention it highlights  on a personal level just how wrong everything in this universe really is.

Among Lois Lane’s (sorry, Lois Luthor’s) co-workers at the Daily Planet are Oliver Queen (who is often mysteriously absent) and Iris West Allen (whose husband is famous for being late.)

Pete Ross (or Pyotr Roslov) is chief of the KGB, as well as Stalin’s illegitimate son. Pyotr is jealous of Superman, whose presence has changed Russia’s power structure, turning his father’s attention away from him and effectively ending his chances of advancement.

Lana Lang (or Lana Lazarenko) is a childhood friend of Superman’s from the Ukrainian farming community he grew up on. Although she does not have a large role in this story, witnessing her family suffering through poverty prompts Superman to assume command of the country.

Batman, whose parents were gunned down for their pro-capitalist political dissidence, grows up to become a lone anarchist and freedom fighter against Superman’s all-seeing and all-hearing regime, whose actions inspire a resistance movement. In this sense, he has far more in common with the anarchistic terrorist/freedom fighter V from Alan Moore’s V for Vendetta. Despite not being a multi-billionaire in this universe, the Dark Knight is nonetheless incredibly resourceful, one that constantly remains a thorn in Superman’s side.

Wonder Woman, apparently a slave to political fashion trends in any alternate universe, wears a red and black version of her fabulous wardrobe to mirror the colors of the U.S.S.R. (yes, I know, I’m being silly.) She is still an international ambassador for peace. Her role in the story may be relatively minor, however this instance I’m quick to forgive this; after all, this is a Superman story. She is mostly relegated to Superman’s sidekick and unrequited love interest. That Superman is oblivious to Diana’s feelings for him demonstrates that the more political power he assumes, the more disconnected he becomes with the rest of humanity.

DC Universe Fact: The world and continuity of “Superman: Red Son” is one of the fifty-two divergent realities officially considered as a part of the DC Multiverse. Its designation is Earth-30.

The best way I can describe “Superman: Red Son” is as a historical or geo-political Bizarro World. By making Superman Russian, Millar not only shows us a Superman from another country, but offers us a chance to look at what the world itself would have been like had Russia dominated the Cold War.

As a history buff, I find it fascinating for me to see how the political climate of this world has radically diverged from our own. In the United States, Richard Nixon won the 1960 U.S. presidential election, but was assassinated in Dallas, Texas, in 1963. He was succeeded by John F. Kennedy, who went on to become the first President to file for divorce. The United States is forced to grant independence to the state of Georgia, an ironic reference to the real-world Soviet State of the same name. There is also mention of secessionist movements in Detroit, Texas, and California, as well as “communist” terrorist attacks against the White House.

Meanwhile, in Russia, there are no references to Soviet interventions in East Germany (1953), Hungary (1956), or Czechoslovakia (1968). In fact, only the United States and Chile remain independent from the Global Soviet Union, and both are on the brink of political collapse.

Red Son does not follow the standard Communism = evil, capitalism = good formula. The story is color-blind in its political views, neither black nor white, but varying shades of gray. Superman isn’t automatically a no-good “Pinko Commie” just because he’s Russian; he’s still an altruistic benefactor who only wants the best for humanity. And even though Lex Luthor is using his genius in the pursuit of freedom from oppression, he is still an egotistical diseased maniac who cannot stand the thought of living in the same universe as Superman.

“Superman: Red Son” is a wonderful stand-alone story. It’s full of Superman mythology to keep the fans on their toes. By showing the story throughout the latter half of the 20th Century, it also offers a taste of nostalgia for the comic books of the old days. More than that, however, it’s a sociopolitical commentary on foreign policy.

At a first glance the artwork by Dave Johnson and Kilian Plunkett could be considered standard fare, but there are subtle nuances that actually compliment the history the storyline draws from. There are times when the book is channeling the spirits of Joe Shuster, Bob Kane, and William Moulton Marston (the first illustrators of Superman, Batman and Wonder Woman, respectively.) There are also times when they evoke Soviet-era propaganda posters. The art starts with a nostalgic Golden Age look, then gradually progresses towards a more contemporary style, as if to illustrate the passage of time in the story.

I would like to comment on the ending, but I cannot go into any details without spoiling it for anyone who hasn’t read this book. Suffice it to say, it is one of the most mind-blowing endings I’ve ever read in a mainstream comic book. And if you have read this book, then chances are you already know what I’m talking about.

As objective as I am trying to be, I honestly cannot think of anything bad to say about this book. This is truly a unique and exemplary form of comic book literature, comparable to Watchmen, The Dark Knight Returns, or Kingdom Come. It’s that awesome.