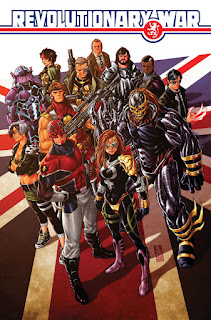 Revolutionary War was a recent Marvel Event with a rather British feel to it – like the punch of a superhero connecting with the thwack sound of leather cricket ball on willow bat. An event set in the United Kingdom of Marvel Universe 616 and featuring a plethora of home grown UK Marvel talent both on the page and behind the scenes. Having kicked off the year with its launch in early January the series has just drawn to a close following the events of the eighth and final installment.

Recent Marvel comics’ in-Universe history has seen a relative resurgence in British presence. Cynically this may be seen as Marvel’s latest attempt at developing a more international market for its comics. But this is not necessarily a bad thing given that the Marvel Universe has traditionally paid more attention to the USA, outer space and fictional countries.

This resurgence, whatever its cause, has been able to capitalise on the critical acclaim of Paul Cornell’s 2008 series Captain Britain and Mi:13. Two years later as part of Marvel’s new direction in the Heroic Age Captain Britain was installed as an bona fide Avenger and would finally play a major role in Rick Remender's Secret Avengers in 2012, featuring a powerful scene where he single-handedly manages to get the edge on the Phoenix Force, and also with the Captain Britain Corps in Uncanny X-Force from that year.

Although, as you’d expect given that he has a great big Union Jack on his chest and the potential power to go toe-to-toe with the biggest Marvel heavy hitters, Brian Braddock has been the main way of symbolising the UKs representation in Marvel comics. Slowly, though admittedly retaining a direct association to Captain Britain, other characters have begun to make appearances such as Faiza Hussain in the Age of Ultron storyline and pupils from the new Braddock Academy in Avengers Arena in 2013.

And it is this showcasing of a wider pool of British superheroes that Revolutionary War sets out to do with aplomb. From characters that most Marvel fans will have likely come across before, like Captain Britain of course, to those with whom readers might be familiar. In fact the raison d’etre of Revolutionary War is to bring back the heroes featured in the early 90s by the now defunct Marvel UK imprint. As such we see the return of the likes of the Death’s Head, the Knights of Pendragon, Motormouth, Dark Angel and the Warheads.

The structure of the series clearly sets out to bring each character or team to the fore for their moment in the spotlight, almost like a ‘Britain’s Got Superhero Talent’ audition, with each of the returning Marvel UK heroes given their own specific issue, named accordingly. Captain Britain himself actually seems to be used sparingly here, featuring only in the first and final issues that bring everything together and raise the stakes.

Whilst this does mean that the series achieves its main goal of fully and fairly using its roster of Marvel UK characters it does sacrifice a little in the story. Obviously a first issue has to get some introductions out of the way, though in Revolutionary War we get additional introductory exposition in each of the following six issues. This can make the overall story feel a little disrupted at times, though it depends on which issue as some handle this better than others.

It is perhaps a little difficult to rate the individual issues against each other. Given that each opts to focus on slightly different themes despite the overarching story it makes a straight comparison between them less relevant. For instance the Death’s Head section is probably the more comic book action orientated. Though possibly the Super Soldiers and Warheads issues feel like they have little in them that reaches the highs of some of the other segments and thus are probably the weakest by default.

The most interesting theme that runs through Revolutionary War is the changing nature of Britain and Britishness, following on from similar elements in the previous Captain Britain and Mi:13 series. In the Knights of Pendragon issue, an issue that otherwise occasionally struggles with rushed pacing and unclear action, we actually get to look into the magical embodiment of the British psyche. This issue in particular takes great joy in visually and narratively mixing up the old and new elements of British identity such as the clichés of Arthurian legend with multicultural Olympians.

Although tied to the theme of a changing Britain another element that gets drawn out is the effects of ‘Austerity Britain’ on both the real country and the fictional heroes. Some of these reference unnecessary and unsubtle but on a couple of occasions the writers think of a twist that really nails the concept. The subject of inescapable debt and subsequent deals with the devil makes the Dark Angel issue a real stand out. Whilst the Motormouth issue later in the run looks at the domestic rather than magical repercussions. Despite not having been seen for the best part of 20 years Harley Davis has become in this one issue a really interesting character.

20 years ago Marvel UK finished and simply stopped, dropping the on-going saga of the battle against Mys-tech. The battle against the ancient, magical secret society planning on sacrificing the entire British populous to achieve immortality was never resolved – until now. Revolutionary War actually uses the sudden and unanswered end of the original arc as the central mystery to its own plot as Mys-tech, thought beaten, rise again.

Probably because the previous issues focus on specific characters it means that the overall story doesn’t progress quite as quickly as it might. The upside to this is that it strings the mystery out well but this doesn’t quite make up for the fact that this leaves the finale with an awful lot to do. Unfortunately to fit everything in the finale becomes a little rushed and doesn’t quite answer all the questions. One central character's appearance seems to be a continuity error. Given that in a previous issue another character had another such error ironed out it seems odd that the final would create an issue for another character if it wasn’t on purpose. The fact that this series has no definite or even likely sequel means it is a shame that issues like these couldn’t be wrapped up fully by the end. However all this is not to say the finale is a disappointment – there’s still plenty of action and some rather funny digs at more American-centric comics.

Overall this arc has been something of a joy for British Marvel fans. As well as the references that flesh out the world of Marvel 616 UK, the most obvious aspect is seeing some beloved old characters dusted off and thrown back in to battle. Indeed the final battle of a war that had been left unresolved. A glancing comparison could be made to Day of the Doctor as an example of a series returning to an unseen past, bring returning characters and setting things up for a new future.

Perhaps that is what is Revolutionary War is intended to do – pave the way for more development of Marvel’s British properties. Based on this outing there would be plenty of scope to see more of how Dark Angel manages her demonic pact, Motormouth’s balance of domestic and heroic chores and the prog-folk tinged adventures of the Knights of Pendragon or even the out and out action of Death’s Head.

Maybe a little constrained by the story structure Revolutionary War doesn’t quite hit the highs of Captain Britain and Mi:13. But this is a success. It has shown that there is plenty of future potential that can be mined from these characters and certainly left us with the expectation of more. Even should these characters not be picked up for further adventures they have been given the final hurrah they have been deserving of for all these years as well as giving modern Britain a fresh airing in the Marvel Universe proving that there is more to it that cricketing clichés. Although we can’t tell for certain yet whether Revolutionary War is a nostalgic insight to past characters or an introduction to reappearing heroes, it is certainly an arc worthy of reading for any UK Marvel Fan.
Posted by John "Zanziber" Rogers at 6:00 AM
Email ThisBlogThis!Share to TwitterShare to FacebookShare to Pinterest
Labels: Reviews