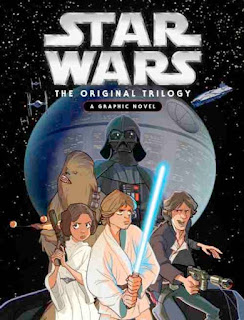 Star Wars: The Original Trilogy A Graphic Novel is the newest comic adaptation from Disney Lucasfilm Press; it is the latest evidence that Disney gets it. The work is proof-positive that Disney cares about the Star Wars brand by continually reinvigorating our beloved mythology in new and refreshing ways. The art is crisp, and has a style that features a manga-hybrid quality, but contains a spirit evoking the classic original Marvel adaptions. It is aimed at ages 8-12, but is suitable for all ages, and, as promised on the back cover, allows the reader to experience the saga in a way you never have before.

It appears that nine different artists contributed to the book, and while this is noticeable on occasion, it is not particularly distracting.For instance, the familiar mask of Vader is on the cover, and while it seems more alien than the film version, it still creates the appropriate amount of menace in context with the other characters. His helmet is more distorted, but fits in well with the iconic McQuarrie model recognizable by fans of the Original Trilogy. It’s a different method of expression, but it works. It maintains the essence of the Sith Lord, and so many of the other character designs create this atmosphere as well.

For instance, Lando Calrissian looks like a smooth-talking shyster, which is exactly as it should be. Herein lies the fun of this graphic novel. Whether you are an artist or not, the designs give you something to talk about. Nothing is done haphazardly, and is painstakingly created. The attention to detail in the work enhances the storytelling greatly, even down to the dialogue boxes. When Darth Vader speaks, it’s in black, which helps to capture the tone of James Earl Jones’ booming voice. This provides an excellent method of expression that is welcome, and adds greatly to the narrative.

The layout does this too; of particular note are the presentations of some of the more iconic action sequences. When Vader faces Luke Skywalker on Cloud City, or in the Emperor’s throne room in Return of the Jedi, it is easy to follow, and manages to escape some of the frenetic tropes that have become all too familiar in modern comic book storytelling. It would be easy to throw something like this together for a cash grab, but happily, this is not the case here.

The true test, however, is the dialogue. The book credits Disney Lucasfilm Press, with a manuscript adaptation attributed to Alessandro Ferrari, and does an admirable job of providing much of the dialogue , which we are as familiar with as our address and phone number. While it is true that not every line from the films is present (that would not work well in a graphic novel anyway), it is permissible in this medium, as dialogue and art combine to tell the story. The spirit of Star Wars is alive and well in Star Wars: The Original Trilogy A Graphic Novel, and I was pleasantly surprised.

All in all, it’s a nice compilation of A New Hope, The Empire Strikes Back, and Return of the Jedi, and will leave you engaged and satisfied. The end of the book reveals, “Coming soon in the same series, all the other episodes of the epic saga!”, and after enjoying Star Wars: The Original Trilogy A Graphic Novel, I am more excited about this than I would have originally guessed.
Posted by John "Zanziber" Rogers at 6:00 AM
Email ThisBlogThis!Share to TwitterShare to FacebookShare to Pinterest
Labels: Reviews