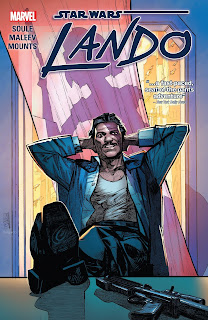 That was my reaction when I first heard the news that the beloved scoundrel of Cloud City would not be appearing in Star Wars: The Force Awakens. Lando Calrissian, a silver-tongued scoundrel with a heart of gold, was a great character, and I was disappointed to learn that we wouldn’t get to find out what kind of life he had built for himself after the events of Return of the Jedi. Fortunately, though, Disney made the wise decision to team up with Marvel and bring the character to back to life in the five-issue comic miniseries Star Wars: Lando. And while it may not be quite the same as seeing Billy Dee Williams back on the big screen, Lando is a rock solid addition to the ever-expanding universe of Star Wars.

Written by Charles Soule, illustrated by Alex Maleev, and colored by Paul Mounts, Lando takes readers back to a time before the events of Empire Strikes Back, a time when the character got by exclusively on his wits and charm. In this series, he sets out to settle an old debt by stealing something far more valuable than he had imagined when he took the job. Unsurprisingly, things don’t quite go according to plan, leaving Lando and Lobot — you know, the silent dude with the cybernetic implants — in a real bad spot.

On the surface, the series’ central plot sounds predictable and ordinary. And that’s because it is. But while the planned heist may be the biggest thing going on in Lando, it’s not the most important, or even the most satisfying. Lando is really about the evolution of the character himself. The heist is nothing more than a vehicle for the kind of development that he never received in the original cinematic trilogy. In this series, we get to see just what kind of man he was before becoming a valued member of the Rebel Alliance, providing valuable context to the emerging dichotomy between Lando the scoundrel and Lando the hero. We’re also treated to a firsthand look at the relationship between Lando and Lobot, the latter of whom is far more talkative than you might have guessed. It’s always a treat to see secondary characters get a second chance to shine, and Soule certainly makes the most of the opportunity, expanding upon and adding to the deep emotional bond between the two men.

If there are any flaws with the writing, they can be found in the dialogue. For the most part, Lando’s personality is accurately reflected in the tone and tenor of his speech. However, Soule does try a little too hard at certain points in the story, inserting lines of dialogue that just feel a little too cheesy and forced. It’s not a persistent problem by any means, but it happens frequently enough to catch your attention. Other than that, the writing is as good as any Star Wars comic series you’ve ever read.

The quality of Soule’s dialogue and characterization is given a run for its money by Maleev and Mounts’ artistry, which is some of the best — and, more importantly, some of the most unique — I’ve come across in Marvel’s various Star Wars miniseries. Mounts’ color work gives the story a bit of a noir feel, especially in the early stages of the story. That’s not something I’m used to experiencing in a Star Wars comic, but it meshes perfectly with the overall mood of the story. Maleev’s illustrations are equally impressive, as his depictions of the characters couldn’t possibly be more lifelike. Perhaps the most striking feature of the artwork in Lando, though, is the masterful use of shadows and lighting to keep the readers’ eyes focused on the most important visual elements within each individual panel. Whether it’s a subtle grin flashing across Lando’s face or a blinking red light on a ship’s control panel, Maleev and Mounts make certain that the first thing you see in each new panel is what they want you to notice first.

In conclusion, Marvel’s Lando is clearly one of the best Star Wars spin-off series, if not the best spin-off series, that we’ve seen so far. Soule’s decision to focus more on character development and relationship building than shootouts and space battles is wonderfully refreshing, and Maleev and Mounts’ artistry is as good as it gets. I’d put this particular book in the “can’t miss” category.
Posted by John "Zanziber" Rogers at 6:00 AM
Email ThisBlogThis!Share to TwitterShare to FacebookShare to Pinterest
Labels: Reviews