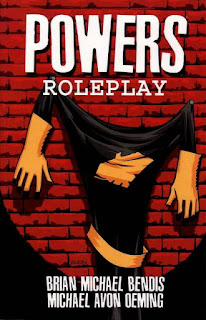 The cover of Bendis and Oeming’s POWERS VOL 2: ROLEPLAY is a little misleading to me. It’s the costume of Detective Walker’s alter ego Diamond nailed to a brick wall. So obviously, I was hoping we’d get to dive into more of his backstory with some sort of threat to his former secret identity. That isn’t quite what happened, and I’m not sure how to feel.

One of the cool things about reading through the back catalog of one of my favorite writers is that I get to watch him build up to the writer he is now. The downside is that I feel like I know his tricks. I’ve been following Bendis since ULTIMATE SPIDER-MAN Volume 3: DOUBLE TROUBLE (2001); he was the first writer I ever needed to follow, and I always pay attention when he takes on a project. So as I read POWERS VOL 2 and reflected on last week’s POWERS VOL 1 review, I began to think about what I’ve learned about Bendis. Through the years, I’ve watched him kill and re-imagine beloved characters like Spider-Man and make devastating reveals in SECRET INVASION; I’ve seen him build characters that I didn’t even know existed, like Luke Cage, into leading men and women. I’ve seen him turn a classic stoic hero like Cyclops into one of the most controversial characters in the Marvel Universe, but, when I got to the end of WHO KILLED RETRO GIRL? as well as ROLEPLAY, even though I didn’t predict the ending, it wasn’t quite as shocking as it would have been to me in 2001.

ROLEPLAY begins with Walker and Pilgrim as they begin investigating what appears to be a copycat killer (imitating the murderer of Retro Girl from the first volume). They quickly learn that it isn’t a copycat killer, and the victims are not superheroes, just college students roleplaying as them. What began as a roleplaying game between friends quickly turns into a hunt when one of the deadliest super villains in the world gets involved, and Walker fights for his life.

The ending didn’t do it for me because I’ve seen Bendis do similar things in his smaller scale Marvel books, so it wasn’t entirely fresh to me. However, I really enjoyed the rest of the story. I was genuinely interested in the villain of ROLEPLAY, The Pulp, and I wanted to know more about him. I understand the nature of the story is to beat the bad guy, and in the detective’s life or death situation, he isn’t concentrating on hearing the villain’s life story, but a monologue would’ve been nice.

Deena Pilgrim is becoming a bit better than she was in the first volume, but I still don’t find her completely likable. Her character development suffers a bit due to her suspension from the force halfway through the story, but I think she’ll be more present in VOL 3. She does stick to her guns, though, I’ve got to admit that. Christian Walker’s character is roughly the same as in VOL 1. This is not to say that he’s emotionless, but we do see a bit more from him here. He’s got an anger streak that is justifiable, but it leads to activity that feels questionable. There’s also an awkward moment toward the end where he feels a bit depressed by finding out Deena has a boyfriend, so it seems he’s lonely too?

The art is obviously similar to the first volume, but somehow I feel like it’s a little looser. The noir aspects of the book are really emphasized in this volume because it has a dark subject matter. This leads to heavy shading, though, which often obscures features and distorts faces. This heavy shading does help to emphasize the emotions of the characters, but I feel like the character figures suffer because of it. The panel where Deena says “But it was an accident…” is an example of how her face seems misshapen, but the reader can tell that she feels alienated, and Oeming is possibly trying to symbolically have her appear as the villain in the situation because of the full faced nature of the shading.

While the art succeeds exceedingly in its effort to be cinematic, the panel structure of some of the pages is so crammed full of activity that it’s hard to tell what’s happening and what order it should be happening in. For example, in the pages above, Walker is interviewing a witness to the murder, and while these panels succeed in getting the plot to move, the panels that surround are not as clear. It’s hard to tell what Pilgrim is doing, and the heavy shadows on the art don’t aid the panel situation either.

Oeming and Bendis have added another small universe characterization moment in ROLEPLAY as well. In WHO KILLED RETRO GIRL? a pair of clashing foes crash into a building while Walker and Pilgrim are discussing their case in front of their car; the detectives don’t skip a beat and they continue talking about their case. This time, Walker and Pilgrim are in the same situation, but a dimensional traveler shows up.

Pilgrim reacts by throwing up, and Walker is obviously panicked, but in the following panel, Pilgrim shouts “Fuckin’ dimension-jumpin’ pieces of crap!”. This is a small but important moment because it shows that stuff like this happens often enough that it’s only moderately surprising.

While ROLEPLAY isn’t the story I expected or necessarily wanted, I know I have at least 14 more volumes of POWERS to get through, and it is a good follow-up to the story from the first volume. It adds some rules to the universe and we get to see the ugly side of police bureaucracy in a superhero universe. Sadly, the delicate balance between the superhero and noir genres that the art rides in “WHO KILLED RETRO GIRL?” is breached this time, and the clarity of the story suffers for it.
Posted by John "Zanziber" Rogers at 6:00 AM
Email ThisBlogThis!Share to TwitterShare to FacebookShare to Pinterest
Labels: Reviews