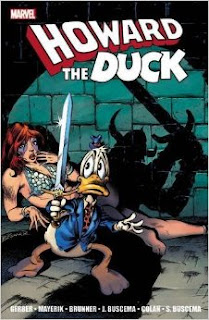 Trapped in a world of 1970s social satire, Steve Gerber’s iconic, and occasionally infamous, creation Howard the Duck still remains as prescient as ever. Finally back in print in an affordable format, today’s comic book-reading audience can enjoy the acerbic wit and zeal of a curmudgeon duck and his gal pal Bev Switzer. In this first collection, Howard meets the Man-Thing, gets transported to Cleveland, runs for president, and much more.

Gerber is joined by some of the finest artists that the mid 1970s Marvel Bullpen could offer, from co-creator Val Mayerik’s invention of the iconic character to the brilliant dynamism of Gene Colan.

This collection also offers an interesting historical insight into urban life in the 1970s, examining everything from hippies and lobbyists to Canadians and white supremacists. Gerber also took the time to criticize and examine the popular genres of American comics of the time, such as kung fu, horror and, of course, Marvel’s bread and butter, super heroes.

While some readers may have a preconceived notion of who and what Howard is, this comic offers instead a surreal, comedic and revolutionary series of stories that will satisfy any reader who dares.
Posted by John "Zanziber" Rogers at 6:46 AM
Email ThisBlogThis!Share to TwitterShare to FacebookShare to Pinterest
Labels: Reviews