House of Mystery: Room and Boredom 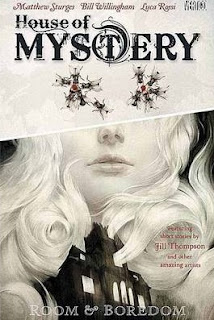 Meet the inhabitants of the House of Mystery: the bartender, the poet, the pirate, the drama queen, and the latest arrival, Fig the architect. Trapped in a giant, sprawling Victorian mansion, a sort of supernatural Big Brother house without books, newspapers or television, the five prisoners each try to forget their own terrible pasts and work out why they are here. In the meantime they work in a bar frequented by patrons from all across time and space who pay for their drinks with stories.

The main character of this volume, Fig, is a young blonde woman who flees the ruins of her own mysteriously destroyed home from two strange figures known collectively as The Conception. She runs into a bar filled with an anachronistic mixture of people and creatures from all across time and space. Unfortunately, when she tries to leave Fig finds herself trapped in the house, along with four others. She learns that the only way to leave the house is when escorted by a mysterious coachman who shows up on rare occasions to take one of them away. No-one knows where those who leave are taken or what happens to them.

Fig recognizes the house as the building of her dreams which she has drawn pictures of ever since she was a child. It is what inspired her to become an architect. The house speaks to her in a voice that only she can hear. When Fig talks back to it the house doesn't like what it hears, which puts all five of its inhabitants in mortal danger.

Like the Sandman series, the plot of House of Mystery is convoluted and the length of the story, at eight volumes collecting 42 issues, makes it a bit intimidating to start with, like beginning a really fat novel. It is a bit hard to get into, but the stories told by the staff and customers of the bar stand alone so you can enjoy them even if you're not sure what's going on over all. There are stories about gangsters, witches, creatures of the deep, you name it! The creators make good use of the art and the story you get from the pictures is often quite different from the one you might glean from the teller's words alone.

House of Mystery: Room and Boredom is an intriguing start to the series. I will be picking up the next volume to see what happens next. I recommend it for fans of Vertigo comics and anyone looking for something a bit spooky to read in the lead up to Halloween.
Posted by John "Zanziber" Rogers at 6:00 AM
Email ThisBlogThis!Share to TwitterShare to FacebookShare to Pinterest
Labels: Reviews