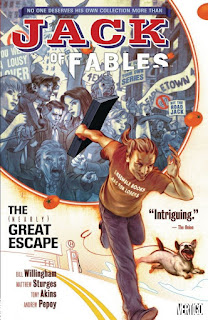 Jack the Giant Killer AKA Jack-Be-Nimble AKA Jack of Tales has made a name for himself with Nimble Pictures, a movie production company that has a whole stable of films starring everyone’s favorite Fable. But when Fabletown finds out about Jack’s money and dealings, his billions and title are stripped from him and he’s sent on a road trip across the world of the Mundanes (normal people). When he gets abducted by a group of “librarians” who want to put him in a retirement community for Fables, it’s up to Jack to break out the imprisoned storybook characters from the clutches of the evil Mr. Revise.

Written by Bill Willingham and published by Vertigo, Jack of Fables takes one of Fables greatest characters and gives him a very deserved spin-off series. The humor and style of Fables is still present, but Jack of Fables is more of an action story right off the bat. Jack’s violent and hilarious tales always keep the pages turning and the panels popping, and the constant inclusion of storybook characters who might not have appeared in the Fables universe otherwise is a great opportunity to explore more of the world that they live in.

Jack’s character is the over-the-top action hero, but with his own smarmy charm added to it. The great thing about having a main character like Jack is that he could do anything at anytime, based on any reasoning he sees fit. He loves being selfish, but he always has these moments where he genuinely wants to help people. It’s this sort of trait and flaw that makes him such a fun character to follow. His dialogue is snappy, his presence is larger than life, and the fact that he’s hard to kill due to his immortality makes it fun to watch him mess up and bite it, hard.
Posted by John "Zanziber" Rogers at 6:00 AM
Email ThisBlogThis!Share to TwitterShare to FacebookShare to Pinterest
Labels: Reviews