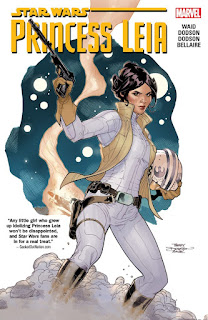 Earlier this year Marvel released a five part comic series focusing on everyone’s favorite Galactic Princess – Princess Leia. Like many of the new Star Wars Canon items being released this year, “Princess Leia” takes place in between A New Hope and The Empire Strikes Back.

The main storyline in Princess Leia is Leia and Rebel pilot, Evaan, leading a mission to rescue the survivors of Alderaan. It’s a personal story for Leia, who never really had a chance to process the destruction of her homeland in the films. And luckily for readers, it has enough action to keep things consistently interesting.

Princess Leia begins at the end of the medal ceremony on Yavin after the destruction of the first Death Star. Leia is asked to remain on Yavin and essentially just hide out. But after Rebel Pilot Evaan lets Leia know that the Imperials are hunting down all survivors of Alderaan, Leia and Evaan grab a ship to start their own rescue mission.

Leia’s first stop is Naboo where after a sighting of a Padme mural (nice touch) Leia rescues some Alderaanian musicians including Pareece and a young girl named Tace. Tace is desperately trying to contact her sister Tula who it turns out is secretly working for the Imperials.

Leia and her ship then move to Sullust where they find Jora who is in charge of an Alderanian enclave. Jora is suspicious of Leia, especially after they discover a transmission from Leia’s ship to the Imperials that has brought stormtroopers at their doorstep. After a narrow escape it is discovered that the spy who revealed their location is the unknowing Tace. Leia believes in Tace’s innocence and makes a plan for her to send a new message to her sister.

Jora and Pareece travel to Espirion where they meet Consul Rill, the leader of a group of half-Alderaanians. Jora insults Rill by expressing his interest in only saving Alderaanians that have not been “diluted” and Pareece is unable to convince Rill that Leia and the other Alderaanians don’t share Jora’s prejudiced views.

Leia makes an arrangement with the Imperials to swap herself for Tace’s sister Tula. However just as Leia is about to be taken onto an Imperial ship Nien Nunb, along with Evaan, comes to the rescue with a smuggled ship.

Without military help from Espirion, the Alderaanins Leia has called to join her are at risk of all being destroyed by the Imperials all in one swoop. In a last ditch effort, Leia broadcasts a call for unity that convinces Consul Rill to come to their rescue and join their efforts to bring together all of Alderaanian’s survivors.

The easy highlight is that this comic series is all about Leia – with many diverse and interesting female characters throughout the story. While Leia was always a strong character in the Star wars films, she was often on the sidelines of the action rather than being the central figure. I thought it was a great idea to start the series off with Rebel Leaders telling Leia she should just sit down and stay safe. When Leia chooses to jump in and get her hands dirty instead of sitting back and letting the boys take care of everything we get a storyline that fans of Leia have been waiting a long time for.

Other highlights include Evaan – who I’d love to see make an appearance in Rogue One – and her partnership with Leia. Like many of her fellow Rebel Pilots, Evaan started off harshly judging Leia for not having the “appropriate emotional reaction” about her home world’s destruction. Which proves that even Rebel Pilots can be jerks sometimes. Seeing how the two women slowly grow to trust and respect each other was much more interesting than if they would have started off the story as friends.

There is also a lot to love about the artwork in Princess Leia. The facial expressions on the characters were suitably compelling for such an emotional tale and I loved the color palette used in the series.

The miniseries stumbles by wrapping up much too fast. It seemed like there was a lot more story about the sister’s relationship, Nien and Evaan’s rescue of Leia, and the conflict between Jora and Consul Rill to be told. While the first four comics all felt evenly paced, the final comic was a bit of a blur right when it was all getting interesting. It would have been nice to stretch the series out a few more episodes.

The short length of the series also didn’t allow for more than one flashback section of Alderaan before its destruction. With all of the mentions in the series about the beauty and arts Alderaan was known for it would have been nice to have seen a bit more of the planet in these kinds of flashbacks.
Posted by John "Zanziber" Rogers at 6:00 AM
Email ThisBlogThis!Share to TwitterShare to FacebookShare to Pinterest
Labels: Reviews