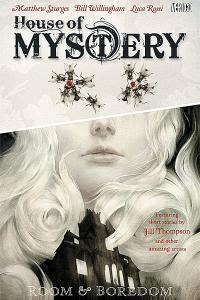 Vertigo got its start as a mature readers horror/fantasy imprint with such titles as Sandman, Books of Magic, Hellblazer and Swamp Thing. Over the almost 16 years that it has been in existence, the comic line has expanded its content however with the success of Fables, they seem to be returning to their roots to some degree. While Fables has been enjoyable, it has felt like Sandman-lite in some ways, invoking its use of mythology and stories, but without the subtext and dept that Sandman was able to convey. However, its popularity has spawned one spin-off title with several others in the works.

Vertigo has decided to build on the success of this by having the writers of Jack of Fables (with Willingham himself being the writer of Fables as well) bring their fantasy magic to a once long running DC Comics anthology series, House of Mystery from which, Neil Gaiman had borrowed characters from to populate his Sandman world. With this new incarnation, Willingham and Sturges create a comic that pays tribute to its anthology roots by having small anthology-like stories within the comic, surrounded by a bigger narrative for those who want a comic that feels like it has somewhere to go.

The main story centers on the House of Mystery itself and its occupants. The reader follows the newest occupant, Fig Reese as its introduction to the house and the mysteries that surround it. This is the main bulk of each issue, with a few pages dedicated to a story that one of the occupants tells, written by either Sturges himself or sometimes Willingham with artwork by a guest artist for each issue. It has to be said that Willingham’s name above the title is a little misleading, as he only writes the first two mini-stories. It rather feels like Vertigo wants Willingham’s name on the cover to appeal to the Fables crowd and thus asks that he writes a couple of these stories every few issues or so. This is however, Sturges’ baby all the way.

Luca Rossi’s artwork is quite Fables-like, which I would assume was a conscious decision by Vertigo and the writers, however there is a darker tone to it. It does suit Sturges’ storytelling style and gives an eerie look to the book while at the same time feeling playful. The guest artists are each a wonderful and add a nice contrast to Rossi’s artwork and they allow the reader to feel like they are experiencing a story within a story. The covers by Esao Andrews are also a beauty to behold and depict the darker side of this horror anthology as well as a beauty all at the same time.

Sturges and Rossi create a world that is interesting and enough “mysteries”, pun intended, to draw in readers to see where this is going. The horror/fantasy side of Vertigo as been quite sparse in the past few years and this comic is a welcome addition to that genre that shows there is still a market for it.
Posted by John "Zanziber" Rogers at 6:00 AM
Email ThisBlogThis!Share to TwitterShare to FacebookShare to Pinterest
Labels: Reviews