George A. Romero's Empire of the Dead: Act One 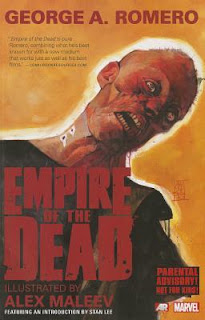 George A. Romero's Empire of the Dead: Act One

Everyone knows that George A. Romero is considered the father of the zombie genre, so anytime he is involved you know that there is potential for something special. While he is most known for his film work, one of his latest projects has him teaming up with Marvel comics for the series Empire of the Dead alongside artist Alex Maleev. If for some reason you haven’t had a chance to check it out now you can get your hands on the first five issues with Empire of the Dead Act One.

The series follows a quarantined Manhattan struggling to keep the undead plague at bay while the flesh eaters shamble through the streets and are beginning to evolve including a former cop who will not let it stop her from completing her mission. While the outside is decaying and overrun, Central Park’s Circus Maximus host bloody zombie gladiator battles while another ancient creature is slowly taking over. Now it is vampires vs zombies with humans caught in the middle. To no surprise this series plays up like a film more so than a normal comic. There are a lot of things happening in this story that has set up numerous interesting twists to come all while keeping it interesting and moving forward. The art from Alex Maleev is gritty and sometimes messy in a good way that works perfectly for the book. Have no fear this isn’t a watered down story either and features plenty of zombie flesh eating, vampire bloodletting and gun toting action to keep any fan of the genre satisfied.

This collection is the perfect chance to get in on this really cool series and not only features the first 5 issues, but also a variant cover gallery from artists Frank Cho, Greg Horn and Arthur Suydam. Don’t miss out on the latest epic zombie masterpiece from Romero and Marvel available now.
Posted by John "Zanziber" Rogers at 6:00 AM
Email ThisBlogThis!Share to TwitterShare to FacebookShare to Pinterest
Labels: Reviews