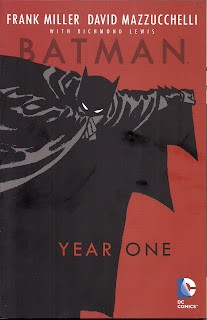 If there has ever been a modern Batman story more influential than Frank Miller's 1986 masterpiece, The Dark Knight Returns, it was Frank Miller's 1987 masterpiece, Batman: Year One. It's remarkable that the same writer scripted two such extraordinary stories a year apart, but truly incredible that the two stories approach the character so differently and accomplish such different things. Yet, there is no contradiction between the two works: Year One depicts a young man who is about to leap, literally, into his life's work, while DKR stars an aging man who accepts that his mission is something he can never leave behind. But these two moments are so far apart that we can barely fathom that the same character's life contains them. Year One stands separate from DKR, not as a prequel.

Superman, Wonder Woman, and other DC characters were significantly redefined by post-Crisis reboots, but Year One leaves the facts of Batman's life much the same as before. Year One, rather, fills in small details during a legendary year; the time frame that Year One spans is covered by just four panels in an earlier origin story, 1980's The Untold Legend of the Batman. This gives Miller freedom to blend existing stories and new elements into a new work that feels familiar just often enough to make Miller's inventions resound.

Year One has a particular quality that is shocking to the reader, a quality that virtually all previous superhero comics had energetically rejected: Realism. Could Batman be real? Of course not. But could the Batman in Year One be real? Still, the answer is no, but many scenes play so close to real life that we feel like we've jumped right out of the superhero genre and into a different world. Year One shows Bruce Wayne going into action eight times, and three of them go badly. He is stabbed once, shot four times, beaten over the head once, and trapped by the police twice. True, he escapes both time he's captured, and the most unrealistic thing in the story might be that he heals well enough to continue as Batman, but for a while here and there, we forget that Year One's world isn't our world. This draws the reader into thinking about Batman's weapons and tactics on the practical basis that Batman's voice-over narration provides, and so the story works on a level that a Green Lantern or Flash story never could, and earlier Batman stories usually did not. Year One's realism has spun off a new "How To" subgenre of Batman story, with narration exploring Batman's training and tactics filling many pages in post-Year One stories and at least three entire published books. The practical details of being Batman show up in every Batman movie since 1989's Batman, and provides much of the basis of Batman Begins and was a major focus of a new title, Legends of the Dark Knight, which focused on key events early in Batman's career when his crime fighting approach was being shaped.

In addition, Year One introduced the organized crime family of Carmine Falcone, who, unlike many "disposable" mobster characters seen in Batman stories over the years, provided a substantial basis for future stories exploring the same era. Year One's take on the Falcones and a younger Harvey Dent recurred in The Long Halloween and other stories, building up a rich Godfather-like early history of Batman continuity. This created a timeline in which Batman faced more realistic, organized-crime opponents, rather than masked super villains, early in his career. While Year One devotes considerable time to developing Selina Kyle as a third focus, and mentions the Joker in the very last panel, the emphasis on realistic criminals further grounds the series in realism.

At the heart of Year One are two men: Bruce Wayne – who has the inspiration, on panel, to become Batman – and Jim Gordon, then a junior officer new to Gotham. The narration alternates between the two men with calendar dates in the captions, showing us a year in their lives as Wayne figures out how to fight a war in the streets and Gordon fights one at work and another one in his marriage. Both men are fiercely principled, physically tough, and in way over their heads. In time, they learn to trust one another, but not until the titular year reaches November. Along the way, they square off against one another, directly and indirectly, with Gordon gradually figuring out how to wrest himself from the clutches of the corrupt Gotham City police force that prefers its criminals to the new caped crime fighter.

Gordon is yet another element who grounds the story, even down to his Chicago (a real city) origin. It is his story that makes the narration work, filling in the blanks between long stretches of time (according to the dateline captions) in which we don't see Bruce Wayne at all. Between January 4 and March 11, we don't see Bruce Wayne do anything at all except return home and kick a tree trunk. What is he doing in the meantime? Certainly not "nothing." The blank spaces invite the reader to contemplate that question and imagine what elaborate preparations of Wayne's body and equipment must be taking place. But they are left unseen, while Gordon begins a long and difficult road to fight temptation in the form of an attractive female partner and a very dirty police department.

But when Bruce Wayne first goes into action, amid scenery right out of Taxi Driver, and fails badly, we find out that his unseen preparation wasn't nearly enough. Wayne barely escapes with his life and identity intact, and beats a self-imposed deadline – a literal deadline, in which his blood will run out of his body if he doesn't summon Alfred to save him – to devise a better way to fight crime, a way that comes to him in crashing glass and a vow to become a bat.

Nothing goes right for the new Batman on his first try, and not always on his second. Year One tells us succinctly about his dozens of encounters interdicting street criminals and focuses, instead, on showing us how he uses skill and brilliance to bring down the city's big criminals, some of whom were elected. He fights a many-front war against ordinary crooks, big bosses, and even the Gotham police. His victories ultimately break up the logjam of corruption that made Gotham "no place to raise a family." By story's end, Gordon is free to call Batman to help on a case. That is the story arc that Year One brilliantly travels, taking an almost plausibly real city and introducing Batman into it, giving us for the first and arguably only time, a compelling explanation for the set-up that other Batman stories have simply assumed, that a man who dresses like a bat is the police's ally (and their superior) in fighting crime.

Batman: Year One stays with you. You don't forget Batman's failures and successes, the new Selina Kyle, the struggling Jim Gordon, or the Falcones. Miller's plot and dialogue and David Mazzucchelli's art create a new world, and although many creators have tried to take us, we've never really gone back to that place since.
Posted by John "Zanziber" Rogers at 6:00 AM
Email ThisBlogThis!Share to TwitterShare to FacebookShare to Pinterest
Labels: Reviews