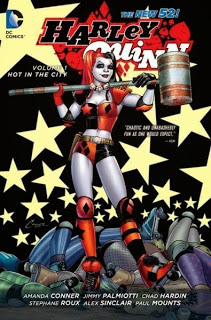 In the 1990s, the LEGION character Lobo achieved a kind of ubiquity in which, having started as a bit player, he became more popular and outrageous in LEGION until he broke out on his own, still appearing across the DC Universe as a "serious" character but also in his own farcical title and a litany of one-shots and team-ups -- Lobo and Batman, Lobo and the Authority, Lobo and Judge Dredd, Lobo and Christmas, Lobo and comic cons.

When Tom Taylor teamed Harley Quinn and Green Arrow in Injustice, it was inspired; when Taylor teamed Harley and Lobo, it was fate. With Amanda Conner and Jimmy Palmiotti's new Harley series, the first issues of which are collected in Harley Quinn Vol. 1: Hot in the City, we find the Harley Quinn character becoming today what Lobo was then, and even Ambush Bug before them -- that DC Universe character still played straight elsewhere, but who's managed to get just one toe planted firmly on the other side of the fourth wall. With her own Christmas and convention specials now, Harley stands to inherit one of the great (if necessarily absurd) heritages of DC Comics.

Conner and Palmiotti's Harley Quinn series is not uproariously funny, but it is entertaining and goofy. Most appealing about the book is its bizarre range -- ultra-violent battles with ludicrous assassins we maybe expect, but it's wondrously confusing when the audience suddenly finds themselves, in the midst of it all, with Harley watching a burlesque, competing in roller derby, or holding a rooftop party for the tenants of her new apartment building (a trick Palmiotti pulled in Superboy, too). To some extent the new Harley Quinn series doesn't know what it is, except that it's not superhero comics as usual, and that may be its biggest selling point.

Hot in the City begins with the book's very fourth-wall-breaking zero issue; the variety of artists here lends itself to Harley appearing in a variety of situations, the most riotous of which when she beats up the Tiny Titans. The zero issue is misleading, however, as are to some extent Conner's covers for the book; the book is an absurdist comedy, to be sure, and the fourth wall takes a lot of damage, but series artist Chad Hardin's style is a mite more realistic than I expected. Harley's adventures are fanciful, but they're not as self-aware as I had thought, at least until the "Gnu 52" bit with Dan DiDio late in the book.

For me, the book works best either in out-and-out meta-commentary, or else when it veers to the slapstick. An early fight scene in which Harley ducks a gunshot and we see the innocent driver next to her explode is the stupid-funny gross-out comedy that the book does well. It achieves, in some parts, the tone of a Quentin Tarantino movie, and no sooner was I thinking this late in the book than Hot enters a couple-page riff on Pulp Fiction and Kill Bill. The references dissipate almost as soon as they start, which is par for the course for Harley Quinn; the book is flighty, never quite holding one thought before it's off to the next, and the next.

Case in point, early in the book Conner and Palmiotti tell a Valentine's tale that lands just this side of splatterhouse horror; no sooner does that end than farce is in full gear again with Harley kidnapping and berating the seemingly-negligent family of a nursing home resident. This latter part comes from Harley, nee Dr. Harleen Quinzel, disguising her pallid skin and taking a job as a therapist. Connor and Palmiotti play this for yucks, but I actually thought the idea of Harley trying to contain herself within a "normal" existence was pretty interesting, and I'd have liked to see more of it. (Kyle Baker wrote a short-lived Plastic Man series that maybe accomplished this better; it was 99% irreverence, but then 1% acknowledging the character's own hopelessness and depression, tempering the comedy with self-awareness.)

I found less effective a good chunk of the middle of Hot in the City, in which Harley is recruited to help octogenarian Sy Borgman (read "Sy-Borg") take out some Cold War enemies. There's basic visual humor in Harley, aged machine-man Sy-Borg, and Harley's ever-present taxidermied beaver all on the page together, but a lot of the spy versus spy references I just didn't get, and Conner and Palmiotti begin to repeat themselves too quickly with their Yiddish curses. About the time we leave Harley and Borgman entirely for a page just devoted to zoo animals tearing off a gangster's head, I felt as though the shark had thoroughly been jumped, and I was glad when we got back to Harley's adventures in roller skating.

Given how much different stuff Harley Quinn Vol. 1: Hot in the City is about, it may be at its most remarkable when it's about nothing -- Harley freeing a kennel full of animals, or eating at a diner with her neighbors. With the exception of China Mieville's Dial H and some of the fleeting domesticity of Animal Man, we haven't had a "regular folks" or non-superhero book in the New 52 thus far; Harley Quinn fits the bill. You won't die laughing, but you'll probably laugh when people die, and hopefully Amanda Conner and Jimmy Palmiotti's endeavor will get sharper as it goes.