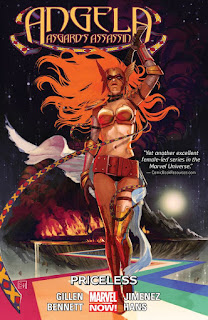 Angela has an interesting history in comics.

She was originally an Image Comics character created by Neil Gaiman and Todd McFarlane, first appearing in Spawn. Eventually, through a court battle, Gaiman gained complete control over the rights to the character and then sold her off to Marvel. After bouncing around a bit through some event and space comics, the character landed her own series. Written by Kieron Gillen and Marguerite Bennett, with art by Phil Jimenez and Stephanie Hans, the series was eventually cancelled by Marvel to make way for their awesome new event called Secret Wars; what did this short-lived series have to offer?

In a long-winding tale of political marriage/love and different cultures, Angela once thought herself to be an angel from Heven (AKA the Tenth Realm). However, after the events of Original Sin, it turns out that she is the long-lost daughter of Odin and Freya, who was thought to have been killed as a baby. Angela is in an odd place after being cast out of Heven when that truth came to light and she doesn’t know her place in the universe anymore. However, she is about to make things far more difficult for herself when she decides to steal her new baby sister from Asgard for undisclosed reasons and becomes a fugitive alongside her pal, Sera.

Angela: Asgard’s Assassin Vol. 1 collects the entire six issue run by Gillen and Bennett, and after reading it, the series itself comes across as a bit lackluster in the story and writing department. It has a very boring main character, a plot that’s aimless until almost two thirds of the way in and awkward story structure and narration — which is disappointing considering that there’s such a strong creative team at the helm.

Beginning with the story itself, the first half of the comic series is about Angela and Sera running around and avoiding Thor and Asgardians. There’s really not a lot happening, just some flashbacks and a couple of awkward mini-stories into the mix to deliver exposition and backstory involving Angela. The story feels entirely boring during this section, since you don’t know what the point to anything is and there’s nothing to get really invested in. The fourth issue is sort of the same way, though we finally (and mercifully) learn what deal is towards the very end with why Angela stole the child and what her end goal is.

The next issue deals with Angela, Sera and the Guardians of the Galaxy busting into Heven in order to expunge the baby of the evil within it. The issue also ends the conflict between Angela and Thor in a rather unceremonious way that makes you wonder why she never bothered explaining the problem to him or the other Asgardians (even if they didn’t believe her, she could’ve tried something first before making things incredibly difficult for herself). The last issue wraps up the story and closes out on a cliffhanger about the fate of a certain character. While it feels like it ended a tad too clean, the story does conclude with a much more satisfactory ending than Ant-Man did in his recently released trade in that it didn’t come across as being contrived and wrapped up the majority of the story elements introduced.

The storytelling on the book leaves a lot to be desired. While the pacing tends to be fine for the most part, things change when the mini-stories take place. In every issue, the comic will just take a break from the action or the main story to tell a tale about Angela or Sera’s backstory. Sometimes the stories are relevant to the topic at hand and sometimes they are not (explaining the rules about angels to the little girl in issue two made no sense given the lead in or what she supposed to be learning). Sometimes these mini-stories aren’t even mini-stories at all, but moments currently happening in the present like with issue four. However, they are always usually very abrupt, just grinding the story to a halt and then having a character go on and on in overly flowery, poetic monologues about the current topic. While the tone and narration style matches what you might see in a Thor comic, there’s just tons upon tons of exposition unloaded in a rather boring and purple prose-esque way.

The troubled storytelling and plot choices aside, the biggest problem the comic has going for it is the character of Angela. She is uninteresting and not compelling, simply put. She is boasted to be this super badass character, the best of best when it came to the angels from Heven and adhering to a code of repaying debts (something drilled into her brain by the people of the Tenth Dimension). The trouble is that there is nothing else to character. She’s tough, unrelenting in her goals, and stubborn… but that’s all there is. She doesn’t even have strong connections or friendships with the other characters that can humanize her nor does she have any exchanges or scenes with anyone where there’s weight or emotion to them. The closest she gets to a friendship or having a “human” side to her is with Sera, but the comic still paints it with the idea that Angela is mostly just focused on their debts to one another. Now, to be fair, all of these personality traits shown in the comic could be an accurate representation of Angela. If so, the comic could have gotten her character down perfectly… but even then, she could have benefited from Gillen or Bennett just giving her a bit more depth or personality.

The rest of the writing, otherwise, is perfectly alright. The characterization for almost everyone else in the comic seems on point (though Ferya looks much older and Odin seems a bit more pleasant in comparison to their appearance in Aaron’s current Thor series). Some of the dialogue and ex”hanges happening, usually not involving the stick-in-the-mud main character, are solid and have some good character beats on display. While the humor can miss a bit or be downright groan-inducing (“Heaven is a Place on Earth” joke was awful), there are a few good jokes that do elicit a chuckle or smile from time to time.

The artwork is split into two parts: Phil Jimenez draws the main story and Stephanie Hans handles the smaller one. Both artists are very good and do a fantastic job of bringing the story to life. Phil Jimenez does a fantastic job drawing the characters and bringing them to life and the action look exciting and amazing in areas. He’s just as good at making locations indelible and the imagery and visuals in the some scenes, such as Angela walking through fire in the third issue, are hauntingly gorgeous. Sadly, Jimenez’s art struggles in a couple of areas. He has a difficult time in areas of keeping characters’ faces look consistent, so they look they are constantly aging back and forth. The inking and penciling look bad in certain areas, in particular the end of the fourth issue where things seem messier and not as clean. Then there is the new costume that Angela ends up getting. Her original costume at the beginning of the series is revealing, impractical, and rather silly looking (though I like her headpiece). Her new outfit is less revealing, but still very impractical and silly looking. Sure, the writer tries to justify her wearing it, but the artist never makes it look good on her. It seems like it would be very uncomfortable to wear, the headpiece looks like it should fall off at any second, and the outfit makes it appear as if she has a Mohawk and ponytail.

Stephanie’s art is just as good as Jimenez, but with less problems. Her layouts are excellent, the imagery and action looks intense and amazing throughout, and the use of colors makes for a dazzling looking book. Heck, she can even make the new costume Angela end up with a look that’s somewhat respectable and that’s amazing. Sure, some of the faces don’t look consistent in a few areas and the narration in these sections tend to cover the images, but that’s nitpicking. In general, despite the problems, the artwork is still pretty great.
Posted by John "Zanziber" Rogers at 6:00 AM
Email ThisBlogThis!Share to TwitterShare to FacebookShare to Pinterest
Labels: Reviews