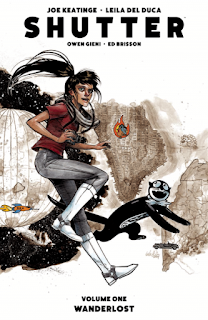 Joe Keatinge’s Shutter is about Kate Kristopher’s attempts to find her identity, lost among the many memories she has of her father before his death. In that sense, it’s a traditional comic where the narrative follows the protagonist throughout the mysteries of her life, the comic slowly spiraling out to include her family and the reasoning for such a secretive background. But along with that tale of finding out who Kate Kristopher really is, Shutter Vol 1.: Wanderlost is also about a triceratops, and lion people, and ghost ninjas trying to kill Kate. It’s all so chaotically coherent that Keatinge’s series has already landed a place in the hearts of many readers.

Part of that is Keatinge’s quick launch into madness. Shutter begins with a young Kate exploring the moon with her father, a sentiment that she’s held onto for sometime. It was a point in her life when things began their forward movement toward adulthood, and growing up with her father allotted her some insane Indiana Jones-style adventures. The science fiction of exploring the moon isn’t so out of this world – because now we’re going to start launching luxury rockets into the stratosphere – especially for a comic book, but it quickly becomes apparent that Shutter ain’t operating on the standards of reality that we know.

Keatinge’s world-building feels incredibly natural, helped along by Leila Del Duca and Owen Gieni’s artwork that often allows double-page shots of the environments. There are so many odd creatures, both bystanders and bounty hunters, but Keatinge makes it work with a passion for letting loose and allowing things to take shape without the need to explain every detail. The first issue alone encompasses a fight with a robot, ghost ninjas, police officers in hovercrafts, and a lion gang, and it’s just the sort of explosive introduction needed to hook the reader quick.

Besides all the action, though, Keatinge finds time for character exploration, even those that don’t have a huge role in the series. Obviously Kate is a big part of Shutter, and Keatinge uses flashback, along with some very interesting paneling choices, to capture her memories of her father. More than that, though, are the multiple jumps to other characters. Shaw and Exland, the two lion bounty hunters, are given a lot more room than I thought; in one scene, after Shaw is told to wait in the car and he instead enters a record store, Exland murders everyone in there to make it look like a robbery. Keatinge doesn’t skimp on the brutality of his story despite the often cartoonish tone, and it’s a real treat.

While Shutter‘s story isn’t incredibly original – and you’ll certainly see shades of Saga in both narrative drive and conceptualization of the issues – it’s the nuances behind it that really make it a fast-paced read. Kate’s family is all sorts of messed up, and in the later issues of Wanderlost Keatinge takes time out of the action to have a family reunion. It is Kate’s siblings that want her dead, siblings she didn’t even know she had, and the shock of finding out that the dad who literally flew Kate to the moon was hiding lots and lots of secrets is palpable.

Shutter is definitely one to watch through a lens, particularly because of Del Duca’s detailed and original layouts. It may seem a bit familiar at the outset, but Keatinge certainly shows that his series is more than just a knock-off of popular adventure tales. Allow the magic of Shutter‘s world to work on you, and you’ll find yourself landing in a fantasy place where the sights are just a bit skewed, but still similar to our cutthroat reality.

With the loss of any new Fables trades, I think I can easily add this to one of my new favorite series to read.
Posted by John "Zanziber" Rogers at 6:00 AM
Email ThisBlogThis!Share to TwitterShare to FacebookShare to Pinterest
Labels: Reviews