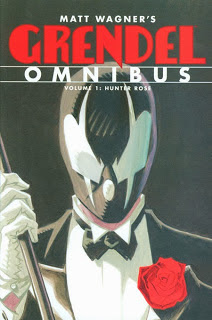 Matt Wagner created Grendel for the now-defunct Comico Comics in 1983; he later took his creation to Dark Horse after the failing Comico attempted to claim the title as one of its assets. The concept is still full of life thirty years later; Wagner will be writing and drawing a crossover with The Shadow later this year. I call Grendel a concept because there’s really not one central character. The “Grendel” name is given to a variety of main characters over centuries; it’s a dark force and possibly a demon from Hell if some of the stories are to be believed.

With all that said, the person most commonly known as “Grendel” is Hunter Rose, the original holder of the title. Grendel Omnibus Vol. 1: Hunter Rose collects Rose’s story in the way Wagner wants to tell it ... and as a result, the original story from 1983 isn’t collected here. Wagner has called it a rough draft and its events are portrayed here in a story called “Devil by the Deed," which you should skip if you’re unfamiliar with the material. Instead of a regular story, “Deed” is an illustrated plot summary told in the form of a biography of Hunter Rose; some of these fragments were used in previous Grendel stories and later assembled here.

To replace that “draft," Wagner created three mini-series: Black, White and Red; Red, White and Black; and Behold the Devil. The result is, in essence, an anthology book telling one story from numerous angles. It’s a fairly daring experiment in sequential art. Once you read the three mini-series and re-read “Devil by the Deed," the entire tale of Hunter Rose mostly makes sense. There are a few flaws; the primary one comes in the form of Rose’s adversary, Argent the Wolf, a werewolf who still feels out of place despite Wagner’s best attempts to inject more mysticism into the story. Some of the nearly fifty individual stories could have been moved around to clear up the timeline.

These flaws are offset by two great strengths. One is that Hunter Rose is an absolutely fascinating anti-hero in the literal sense of the term. Rose has morals; he’s very protective of his young charge, Stacy Palumbo, and he never turns down the opportunity to kill pedophiles. Of course, Stacy is in his care because Rose killed her treacherous mobster uncle after said uncle tried to betray him to Argent. As Grendel, Hunter Rose controls New York City’s crime scene through terror and a ruthless efficiency, sometimes recruiting rival gangsters and other times taking them out with his unique fork weapon. Regular people are just chess pieces for him to move around. If you’ve ever tried to find a comic book version of Nietzche’s concept of the Übermensch, Hunter Rose would be a good place to start.

The other great strength in this Grendel omnibus is the sheer volume of artistic talent involved. Wagner, a personal favorite artist, really shows off his skills in Behold the Devil with a masterful use of the page space. As two of the mini-series’ titles implied, the black and white artwork is joined with occasional and well-planned splashes of red. This only rarely feels like a gimmick. In “Devil’s Vagary," the entire color concept is modified so that some scenes are done almost entirely in red with black line work and white details. “Devil Dreams” confines the red solely to a hallucination of a god of death to amplify the anguish Argent goes through. Many of these stories add detail to minor characters from Behold the Devil.

While Wagner writes every story collected here (along with nearly every Grendel story every published), he only draws a few of the tales in BWR and RWB. He’s instead joined by one of the greatest assemblages of comic book artists this side of SDCC’s Artist Alley. If you have a list of favorite indie artists, you’ll likely find three or four of them within these pages. Phil Hester gets to draw the crucial chapter wherein Barry Palumbo betrays Grendel; it makes me long for a crossover with The Wretch. BWR features Tim Sale, Michael Allred, David Mack, Duncan Fegredo, D’Israeli, Paul Chadwick, and Chris Sprouse. RWB has Jill Thompson, Cliff Chiang (with John Workman on letters!), Jim Mahfood, Kelley Jones, Stan Sakai, Zander Cannon, Darick Robertson, and Ashley Wood. And that’s only about half of each roster!

Matt Wagner tailored his stories to work with each artist’s style. Teddy Kristiansen’s scratchy pencils in “Devil on My Back” add a true sense of unease to a tale of Hunter Rose’s childhood and the origins of his villainy. Stan Shaw uses caricatures and inventive type-setting to tell the sordid tale of Rose’s literary agent in “The Devil’s in the Punctuation." To explore Rose’s rise in the mob, Wagner and Timothy Bradstreet use fake news reports interspersed with silent, black-and-white panels. Tom Fowler illustrates the fall of an adversarial senator with careful calligraphy and what look like political cartoons. This is immediately followed by Andi Watson’s “Devil’s Karma," told entirely in haiku. A personal favorite, “Roulette du Diable," matches the dark deeds of Grendel to Stacy’s actions while bored, with Dan Brereton’s art carefully accented with red and pink.

These two mini-series are separated by what could be the greatest “It Gets Better” comic ever written. Remember, kids: homophobia is inefficient, and inefficiency makes Grendel want to stab people. This story was the most recent until the announced crossover with The Shadow. I really hope Dark Horse can get Matt Wagner to do some more Grendel work, especially with the departure of the Star Wars license. If nothing else, Grendel Omnibus Vol. 1: Hunter Rose packs an incredible amount of value, with the smaller pages keeping the crispness of the lines for the most part. Just be prepared to do a little mental (and online) work to put the entire story together.