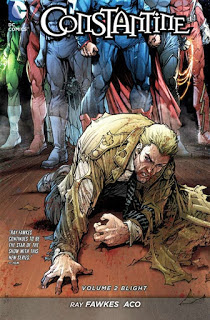 In the last volume, Constantine struck a blow to the Cult of Cold Flame, and now they've both usurped Constantine's magical inventory and are killing rival magicians. Constantine is attacked by Sargon the Sorceress, who seems about to land a killing blow -- until she and Constantine go to bed together.

It's here that Fawkes begins to approach Constantine's mature comics roots. The scene causes the reader no end of difficulty, on one hand because of the implication that Constantine has been forced to have sex with his captor, and on the other hand for the equal implication that Constantine is in fact manipulating events himself to his own ends. In the first issue, artist Szymon Kudranski's art is nicely shadowed and atmospheric, though the characters -- Sargon especially -- tend toward a dead-eyed, far-off look that feels a bit sloppy. The second issue, however, gains a breath of fresh air with artist Aco's (ACO's?) distinct figures and rounded lines -- somewhere between Michael Lark and Frank Quitely -- which make both story and art feel strong, and it's at that moment the reader sees a Constantine series that could really go somewhere.

The end of that issue, however, intersects Constantine with the climax of Trinity War, and then the next issue picks up in media res in Blight. Again, Aco lends a wholly needed touch of class and maturity to the proceedings, but the issue essentially involves Constantine and his new magical crew battling the giant-size Blight monster across Central Park, almost Ghostbusters-esque. Fawkes does not acquit Constantine badly here, and again Aco really steals the show, but it feels like the kind of big, bombastic superhero story that doesn't befit the Constantine character, and it's miles away from Constantine going to bed with Sargon to infiltrate the Cold Flame.

Equally problematic is that all of Blight turns on Constantine being considerably (and quite vocally) in love with Zatanna, and desperate to save her from the Crime Syndicate at all costs. I don't claim to be a Hellblazer expert, but it seems to me that Constantine with one clear, altruistic goal is not Constantine at all. Take, for instance, Fawkes's own story of Constantine and his sidekick Chris foiling Sargon in Constantine Vol. 1: The Spark and the Flame, in which Constantine quite knowingly sacrifices Chris's life for the greater good; Constantine might have felt bad afterward for doing it, but he didn't regret it. Even as Blight is a fun team-up of DC's mystical characters, it stems from Constantine acting out of character, and that nags at the reader through all eighteen parts.

The next issue, with art by Beni Lobel, serves mainly to take up space in the Blight crossover, with a recounting of Constantine's already-introduced traveling companions. Shortly thereafter, Blight itself rather unexpectedly changes its focus from the Blight monster to a conflict between the new Justice League Dark and villains Felix Faust and Nick Necro. Though there are sizable Blight-gaps between the Constantine issues -- and between the book's final two issues are no exception -- they involve Constantine being captured by Necro at the end of one issue and still imprisoned in the next (despite some shenanigans in other issues) such that the final issues give the illusion of being more apiece than the rest.

John Constantine's magical internship under Nick Necro was a big part of Jeff Lemire's final Justice League Dark storylines, largely unremarked on so far in Constantine, so it's interesting to see Fawkes make it "canon," so to speak. Lemire's suggestion in Dark of Constantine as an impressionable kid in New York learning magic with Zatanna at the feet of Necro, supposedly just five years ago, felt a bit pat; Fawkes nicely deepens it, hearkening again to the mature roots, by suggesting what we all assumed, that Constantine and Necro had been lovers. Here again, the first issue of the sequence has Aco's strong art, whereas in Lobel's closing issue, at times Constantine and Necro look so alike that I had to re-read pages to know who was who. The conclusion is a strange mix of Constantine kissing Necro set against Constantine fighting a zombified Earth-3 Sea King who looks like the 1990s hook-handed Aquaman -- again, a little bit Vertigo, but also superhero antics where Constantine doesn't quite fit.

I'm a sucker for a crossover and a shared universe, and there's a rich tapestry between J. M. DeMatteis's Justice League Dark and Phantom Stranger, and Ray Fawkes's Constantine and Pandora. To an extent, it's entirely worth the price of admission to Constantine Vol. 2: Blight's for me to see Constantine talking to the Scottish Terrier that conveys the voice of God from Phantom Stranger, or to see the Stranger and Constantine's momentary confusion over how coincidentally each has mistreated a boy named Chris. There's only so much of Fawkes's Constantine left until it's cancelled and relaunched with Convergence, but I'm in for another volume to see at least if the first two chapters of this book are representative of where Fawkes really intends to go with the character.
Posted by John "Zanziber" Rogers at 8:08 AM
Email ThisBlogThis!Share to TwitterShare to FacebookShare to Pinterest
Labels: Reviews